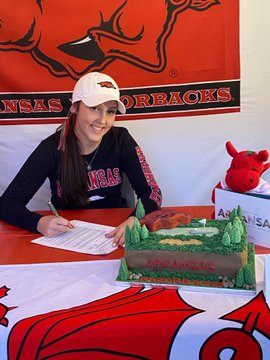 Ffion Tynan will be a razorback in January after signing for the University of Arkansas.

Welsh gold prospect Ffion Tynan has been hailed a ‘gem’ as she prepares to take up a golf scholarship in the United States.

The Pontyclun teenager will head to the University of Arkansas in January where she will also study Recreation & Sports Management.

Tynan too up the game while on a family holiday to Florida and will now head back to the USA for the next stage of her career.

“Ffion is another gem for the 2021 class,” said Arkansas Women’s Golf and Head Coach Shauna Taylor.

“I always say that recruiting is about connections and relationships, and that couldn’t be more true for Ffion.

“A longtime friend of mine sent us a message about a great player from Wales. We did our research and evaluations at several competitions and we knew we had found another great fit for our program.

“Ffion has played all over the world and will bring her experience at competing at a high level to our program.

“She is a student of the game and will join us in January to get a jump start on her Razorback career. I look forward to her coming in early so that she can train, learn our system, and push her teammates to be the best version of themselves every day.

“Ffion is a true asset to Arkansas Women’s Golf!”

And this year she finished fifth at the English Women’s Strokeplay Championship.