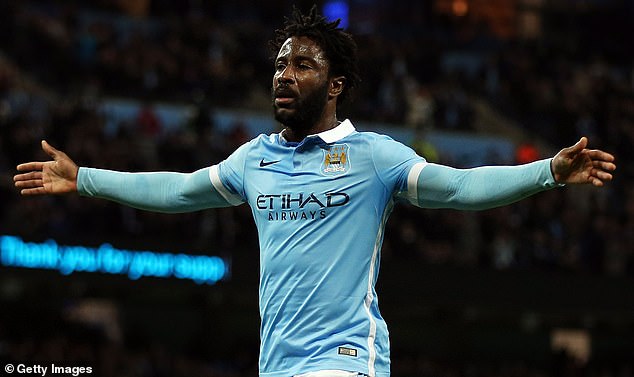 The former Swansea City forward, who scored for Ivory Coast in the African Cup of Nations, is training with manager Michael Flynn’s County.

“Great to have Wilfried Bony training with us,’ said Flynn. “Excellent work ethic, professionalism and standards. Boys will take a lot from this.”Wilfried Bony, who is yet to secure a club after his release from Swansea City at the end of last season, spent the latter half of last season on loan at Al-Arabi in Qatar.

The 30-year-old is training with Newport, while he also employed a personal trainer to stay in peak physical condition.

Bony was a highly rated goalscorer when he moved from Eredivisie side Vitesse Arnhem to Premier League Swansea in 2013.

But e was unable to find form with Manchester City, scoring 10 goals in 46 appearances

He scored 16 goals in his debut season for the Swans, before another nine in the first half of the 2014-2015 season convinced Manuel Pellegrini to take him to Manchester City for £28million.

He went on loan to Stoke City before returning to Swansea in 2017 for £12million, while he is now a free agent.

While Bony ponders his future, Newport County AFC are focused on their Carabao Cup tie against League One Gillingham in Kent this evening (Tuesday).

Gills include former Cardiff City midfield player Stuart O’Keefe in their team. He started his professional playing career at Southend United and later joined Crystal Palace where he was part of the side which secured promotion to the Premier League in 2012-13.

He made 14 top-flight appearances for the Eagles before moving to Cardiff in January 2015.

County have drawn their first two EFL matches and go to Kent intent on earning a first win, albeit in a cup competition.

Flynn will rest players ahead of a home clash with League Two leaders Plymouth Argyle at Rodney Parade.

“The cups have been great for us and this is a competition that we can gain momentum in and build relationships with different players,” says striker Jamille Matt.

“I will be ready if selected.”

Matt could play alongside new signing Tristan Abrahams in attack and says: “It’s a new partnership and he made a good impact when he went on against Cambridge on. He’s a good player.

“He probably needs a few more minutes because he came into it a little late in pre-season, but I’m excited about what he can do alongside Padraig Amond and I.”

It has been 32 years since Gillingham and Newport County last played each other in a competitive fixture. Both clubs will call up squad players.

Gills will still be without Matt Willock, who has a muscle strain, but Manager Steve Evans has a fully fit squad apart from that.

Evans is looking for his first win as Gills boss after Saturday’s 2-1 home defeat to Burton which leaves the Gills with one point from their opening two games.

“Newport County are an extremely talented team who were unlucky to lose in last season’s play-off final at Wembley,” says Evans. “But we have a great group of lads and they do really all care.

“We will all respond appropriately, I have no doubt. We will need too.

“Football is never about losing matches, the best teams do, but for me it is about how you bounce back individually and collectively.”