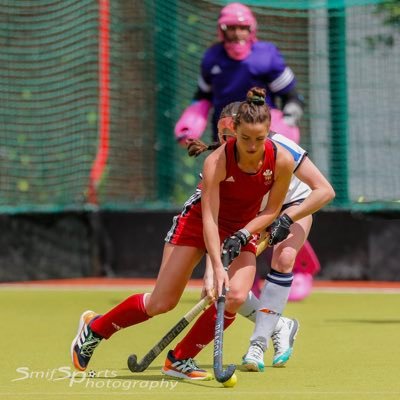 Wales international Izzy Webb started out playing hockey on the gravel pitch at her school.

Now, she is poised to appear at the Commonwealth Games to represent her country, facing some of the best players in the world.

Historically, in most parts of the UK, hockey has been associated with private schools, where the income from fee-payers has enabled them to afford high quality surfaces and modern equipment.

That has produced a steady stream of talented players for clubs and the national team, mostly from the southern regions of England.

In Wales, with fewer private schools, the challenges for aspiring players have often been more difficult.

State schools have often prioritised others sports and even where hockey has been a focus, the facilities are often more basic.

Llongyfarchiadau! 🫶 Huge congratulations to our women’s hockey team who have just been announced!

But that did not prevent Izzy from making the leap from state school – Croesyceiliog Comprehensive – to club player and eventually full international.

“There are not as many private schools in Wales and although the sport is played in many state schools, a lot depends if the schools have the facilities to help produce young hockey players,” she says.

“My school didn’t even have an AstroTurf. We played on the gravel when we were young.

“We also had to take a minibus to the local stadium. I was just lucky enough to have had a teacher who had strong links to local clubs and to the sport.

“You also had to fund yourself. I know some girls who were really talented, but just couldn’t afford to play for Wales.

“Luckily, my mum and dad found the money from somewhere and we sacrificed a few holidays along the way to help support and fund me.

“But I knew a few girls who had to drop out. Compared to the private schools who get all these different experiences and support, we didn’t really get anything like that, which is a shame, really.

“Hopefully, if either the men’s or women’s teams can get any success for Wales at the Commonwealth Games, we can shine a light on the sport which can help with developing better facilities.”

But she didn’t have it all her own way, often having to travel to continue playing and progress her development, as well as provide funding for herself.

The 23-year-old represented Wales at youth level and made her senior debut for the national team against Scotland in 2015 at the age of just 16.

“I got into the sport from school. I had a really supportive teacher, Rachel Price; she was the one who pushed me into the sport.

A great set of performances vs 🇿🇦 ahead of travelling to Birmingham on Saturday.

Thank you to everyone who came down to support this weekend. See you again at the Commonwealth Games ❤️ pic.twitter.com/MiOsMmnOzQ

“After two seasons with Gwent Hockey Club, Rachel would take me down to play every week in the Penarth team alongside her, so yes, I played alongside my teacher from school.

“I was playing at the ladies level at 15 or 16, so I’d say Rachel played a massive part in my early stages.

“I played all sports at school such as netball, hockey and tennis. When I found out I was pretty good at hockey, Rachel helped push me along. I joined Gwent Hockey Club at 13.

“I really enjoyed getting into it because it is such a sociable sport. It involves all ages and they really encourage younger players to play in the women’s teams.

“I grew up quickly in terms of socialising with that team!”

The 35-times capped player juggles her time as an international athlete with her work as a physiotherapist.

First few days in the village. All settled in, training & practice games leading up to our first game on Saturday 🏴󠁧󠁢󠁷󠁬󠁳󠁿🏑@TeamWales @HockeyWales @birminghamcg22 pic.twitter.com/ocjRH2lXIs

She plays for Clifton Robinsons in the Vitality Women’s Hockey Premier Division and shares her time between Cardiff and Bristol.

“I love playing in the Premier League. It’s nice playing with and against some top players, including my teammates at Wales.

“It’s always nice to see some familiar faces and test yourself against the GB girls. It is a really competitive league.”

Balancing training with competition time and a full-time job can be difficult and Webb – whose partner is Wales and Cardiff rugby star James Botham – has looked to her family and friends for some assistance.

“In my earlier days, when I was just getting into the Wales squad, my weightlifting coach, Justin Holly, gave me so much support.

“He was there from the very beginning; he’d sit me down and tell me, ‘You’re an athlete. You can’t be going out and training like a normal person.’

As Sarah Jones heads into her third & most likely final Commonwealth Games, she wants to focus on enjoyment as well as outcomes 🏑🏴󠁧󠁢󠁷󠁬󠁳󠁿

“He also taught me how to cook, proper strength training, and how to organise work and really train like an athlete. It had a really big impact on me.

“My partner is really understanding of all this and he helps out a lot.

“He tells me when I’m training too much and to have a rest or if I could push it a bit more. We are obviously active and we do a lot of training together.”

Wales are heading to the Commonwealth Games and Webb insists the team will be eyeing up their best finish in a distinguished history.

“We are in the best shape we have been for a long time. We have had a big squad and we have trained well, so we are definitely ready.

“We are hoping to get the best place finish Wales have ever had in a Commonwealth Games, so we are aiming high!

“It will be my first Commonwealth Games and I can’t wait! I couldn’t be prouder.”