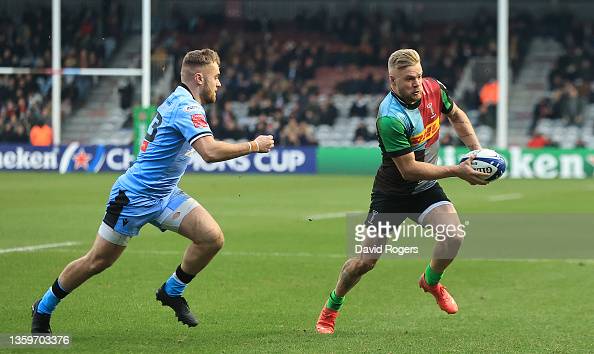 Tyrone Green goes past Ryan Wilkins during the Heineken Champions Cup match between Harlequins and Cardiff Rugby at The Stoop. Pic: Getty Images

Ryan Wilkins has had to grow up quickly this season, so a Thursday night match in front of the cameras against Ebbw Vale should hold few fears.

The 19-year-old centre went from the Indigo Welsh Premiership to trying to stop Antoine Dupont and Marcus Smith in the Heineken Cup and now he is travelling back again.

Wilkins will be part of the Cardiff RFC side hoping to get a first home win of their Premiership campaign when they welcome Ebbw Vale to Cardiff Arms Park on Thursday evening in a match that is live online on S4C Clic as well as the channel’s YouTube and Facebook pages.

It’s been a disrupted league campaign thus far for Cardiff, who have had games postponed due to Covid, and first-team call-ups to supply Cardiff Rugby’s recent Heineken Champions Cup games against European champions Toulouse, and Gallagher Premiership champions Harlequins.

With Dai Young’s side in isolation after their infamous trip to South Africa, it was up to the youngsters – who had been plying their trade in the second tier – to step up and represent the capital city region.

One of those youngsters was Wilkins, who came off the bench against both Toulouse and Quins – a meteoric rise for the youngster who was playing Under 18’s rugby just six months ago.

“It was a surreal experience, I can’t really put it into words,” says Wilkins.

For anyone wishing to have a drink in the Cardiff clubhouse, tables need to be booked

Let’s have a big Ebbw following to shout on the boys 🇧🇬 pic.twitter.com/sfEoEjjUxu

“It was a proud moment for myself and my family. I think from the senior boys’ point of view as well they appreciated us stepping up and they helped us along the way.

“Some of the boys only had a week to learn the calls and get into the structure. But I think everyone bought in and it worked out well in the end.”

Cardiff Rugby could not have asked for tougher opposition to face, coming up against two European giants in successive matches.

One minute Wilkins was peering out from the bench to see French scrum-half, Dupont – in many eyes the best rugby player in the world right now – running the show.

The next he out there on the pitch and playing against Dupont before the same experience happened with Quins and stars like Smith and Danny Care.

“I think the intensity was much higher than the Welsh Premiership,” says Wilkins.

“We had no pressure on us and everyone just went out there and expressed themselves. The coaches just told us to go out there and do what we can. Everyone bought in and put a shift in.

“But coming out on the pitch before the game against Toulouse and seeing players like Antoine Dupont and Romain Ntamack, and then seeing Marcus Smith at Harlequins was just surreal.

“These are world-class players and when you’re 19-years-old, like a lot of us are, we just had to take it in our stride and give it a go.”

Wilkins was fortunate enough to learn off international players in his position like Rey Lee-Lo and Willis Halaholo who hadn’t travelled with the rest of the squad to South Africa and is adamant that the experience will stand him in good stead for the future.

“I think I learnt a lot from the experience and from the likes of Rey and Willis who helped me a lot along the way.

“I think that since stepping up for the first team, different parts of my game have developed, for sure.”

Wilkins has played a huge role in Cardiff’s Premiership Cup campaign this season and was involved again last Saturday when Cardiff booked a place in the semi-finals after 42-7 victory over Carmarthen Quins.

Your @evrfc side to take on @Cardiff_RFC at Cardiff Arms Park 7:30pm LIVE on @S4Cchwaraeon tomorrow evening in the @IndigoGroupPrem

“As a club, we target every trophy that we can and we have to back up our performances week in, week out.

“We’ve taken our foot off the pedal a bit in the last few weeks but I think we’re back to building progression now, so, hopefully, we can keep pushing on and keep winning games.”

The Steelmen will have other plans, although Covid restrictions mean the visitors have not played a game since losing 31-13 away to Merthyr on December 11.

You can watch matches live on the S4C Clic player on any smart device or computer, by going to www.s4c.cymru/clic, or by downloading the S4C Clic App; from App Store on an Apple device, or Google Play on an Android device. If you have a Smart TV or Smart TV Device (such as Amazon Fire TV Stick), you can watch the game via the S4C YouTube channel.