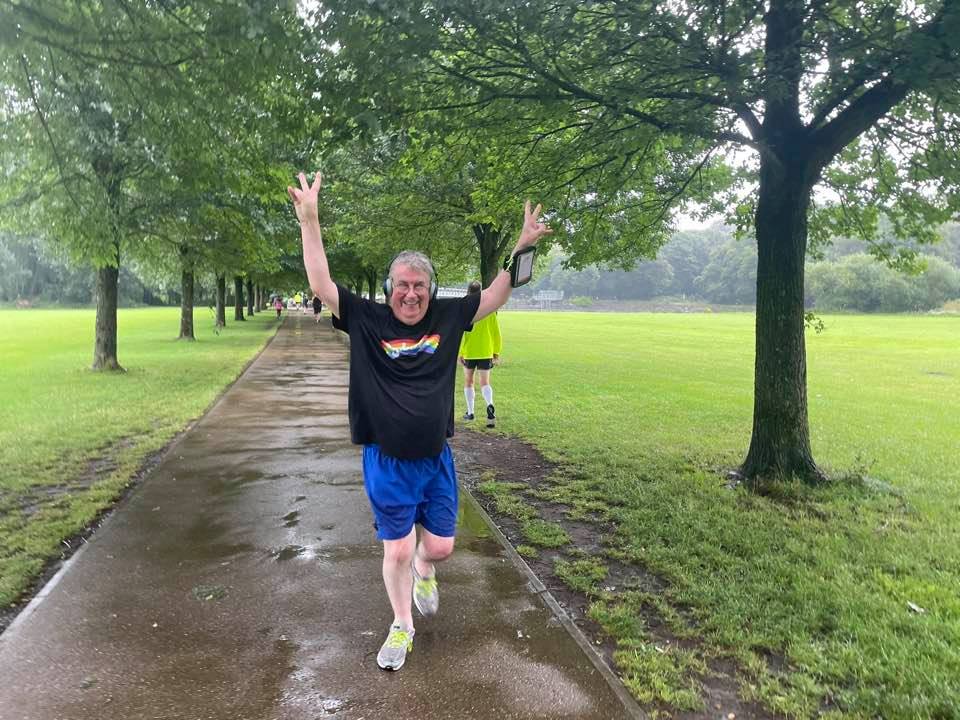 John Gillibrand is the incredible Vanishing Vicar of Pontarddulais whose rediscovered love of running has turned him into a new man.

His story – from frustrated lockdown priest with an expanding waistline – to free-flowing Half Marathon runner is an inspirational one, as joyous as one of his Sunday sermons.

It also serves as a reminder at a time of harsh new year resolutions, that some kinder thoughts about looking after your own mental health are just as vital as any physical aspirations.

The running reverend has gone from over 15-stones down to just 12-and-half stones since he did the Couch to 5K plan and then graduated to Parkrun. But he says he is calmer and less anxious, too.

He has also strengthened the bond with his son, Peter, a regular marathon runner who has helped guide his father’s journey back to better fitness – both physical and mental.

John says that before the pandemic, the life of a West Wales vicar kept him pretty active, but then lockdown and the retreat to online connections began to take a heavy toll – literally.

“As a parish priest, my job involved a lot of informal exercise – a lot of running around as it were,” says the 61-year-old Anglican vicar of the Church in Wales.

“But the lockdown made my routine very sedentary compared to my previous lifestyle. I became aware of how much weight I was carrying and thought, ‘I need to do something about this.

“It was becoming an issue and I realised I had to do something to change.

“The other thing to realise is that clergy are just like everyone else. We are not exempt from the emotional and mental pressures everyone felt during lockdown.

“Again, I thought I need to do something. Thankfully, my son Peter told me, ‘Dad, come running with me!’ And that was the start of it.”

A former pupil of Manchester Grammar School, John admits his running days had ended with his final PE lesson.

Even then, he was hardly an enthusiast and preferred the occasional swim to the rigours of school Cross-country.

So, his first steps were to follow the Couch to 5K programme – a nine-week NHS-backed plan that begins with a brisk five-minute walk followed by 60 seconds of light running.

“My first run was a challenge – just getting up some speed,” says John.

“The Couch to 5K programme was enormously helpful. It breaks you in gently, doing a minute’s running and then walking again.

“What was really frightening was that I looked ahead to the end of the Couch to 5k routine to what it was like at the end. I thought, ‘I’ll never be able to do that!’

“But, every time I went out for each individual session. I would think, ‘I can do this.’”

John had almost reached his 5K goal when Peter, a Cardiff-based radio journalist, called him up to suggest it was time for the next step.

“Peter asked me to go over to Cardiff for the first of the Parkruns after lockdown and said he would run with me.

“It was helpful to be running with someone else. That was a big thing in convincing me to do it.

“But the welcome I had at Parkrun was fantastic – inclusive and very warm-hearted. I was fearful of other people’s attitudes but the cheers and the encouragement for those who finish the run first are just as loud as when the people at the back end come in.

“The stewards were cheering me along when I was finishing at the back and that was terrific. It’s unconditional acceptance.”

Soon, he was a regular parkrunner – feeling the physical benefits of regular exercise as well as the huge psychological lift it provides.

Small steps became longer ones and one thing led to another.

This man. My running mate. Dad.

I’m absolutely over the moon. Dad only started running around July time. Before that, he could barely run 100 metres!🏃‍♂️

Just keep going. One foot in front of the other… and you WILL achieve your dreams. 💪 pic.twitter.com/N3dpNis1GH

“Soon enough, by the time I got back to the vicarage, I had run my first 10k. I’ve now done three of those and looking to do many more.

“There is an enormous gain in well-being, what some people call “a buzz”.

“Once you are out there running, it focuses you on the running, or your surroundings. You forget other things for a while and it’s a huge benefit to mental and also spiritual well-being, as well as physical well-being.

“It’s not true of every run – and some runs are better than others – but it does sometimes give you a heightened sense of awareness.

“You recognise the natural beauty around you and your own place in that.”

The path-plodding priest is now running every other day and was getting a regular Parkrun under his belt on a Saturday until Welsh Government restrictions put a hold on outdoor gatherings of more than 50 people.

Next on his horizon is the Cardiff Half Marathon, scheduled for the end of March.

“I am also mindful that I am doing this at a certain age. I need to look after my health.

“Thankfully, I have had very little trouble with my knees, apart from when I slipped on a cowpat running on Worm’s Head!

“I’m going to see how the Half Marathon goes before considering a full marathon. It’s about living life to the full, so in principle, I’d like to tackle a full marathon one day.”

For those still at the start line of their own fitness voyage, John has some wise advice.

“Just to get out there. You’ll feel self-conscious in your running gear, but people actually don’t notice you. You’re just another person out for a run.

“The feedback I get is always positive.

“I thought that first minute was the longest minute of my life when I started.