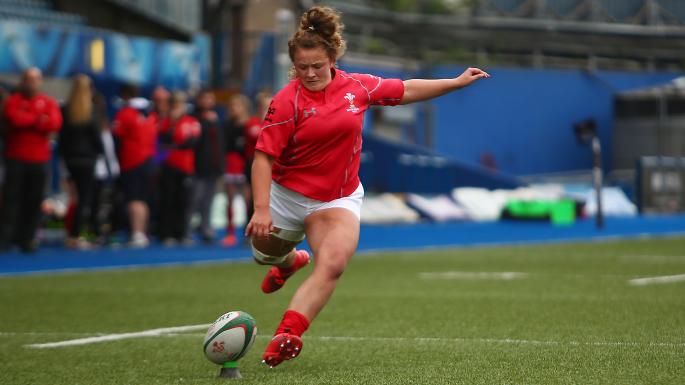 George snatched a nerve-jangling 17-15 win – Wales’ first of the tournament – when she held it together to kick an awkward, into the wind conversion of Siwan Llilicrap’s try which came from the last move of the match at Scotstoun.

“That felt so cruel,” said Munro. “But it comes down to playing the conditions – we played them well in the first half but we should have played more territory in the second half. Wales made it difficult but ultimately you want to play the game in their half.”

It looked as if Scotland were going to be the team who were going to get off the mark in this year’s championship when Chloe Rollie crashed over to give Scotland a 15-10 lead with three minutes to go.

But Lillicrap, who spilled the ball at the try-line in the first-half, made up for her earlier error to level the scores at the death, before George showed her nerveless finish.

Bethan Lewis capped a fantastic first-half performance with a try to level the scores in reply to Scotland’s scores from Jade Konkel and Rachel Malcolm.

Wales looked shell-shocked in the opening stages as Scotland stormed into an early lead. The hosts piled on the pressure for the first seven minutes and made inroads into the defence with strong runs from Lisa Thomson.

Wales held firm but finally cracked when No.8 Konkel crashed over from close range to give the hosts a 5-0 lead.

But the Welsh response was swift. First Wilkins slotted a penalty before Lewis ran a devastating line to cut through in midfield to setup a dangerous attacking platform.

Wales stayed patient and battered the Scotland line before Lewis popped up to pick and go from close range to barge over the line. Wilkins converted to give Phillips’ side a 10-5 advantage.

But Scotland marched straight back down the other end to level the scores when Malcolm peeled off a powerful maul unnoticed to score.

With a strong wind at their backs, Wales were determined to go in with a lead to protect at half-time. It looked as if they had one to defend when Lillicrap crashed over at the back of a powerful scrum, but the TMO spotted a knock on and the first-half ended level.

Wales came out firing in the second-half despite a stiff breeze in their faces. The second period turned into a real war of attrition with both sides not giving away anything in defence.

But as the clock ticked past 75 minutes, Scotland looked like they had dealt Wales a devastating blow.

Hannah Smith got on the outside of the defence after a free-flowing attacking move before feeding full-back Malcom raced over at the corner to all-but seal victory.

But Wales charged back downfield and camped on the Scotland line before Lillicrap muscled her way over the line to level the scores with a dramatic close-range try.

The unflappable George stepped up stroked the conversion through the uprights despite a string wind blowing in her face to spark wild celebrations.