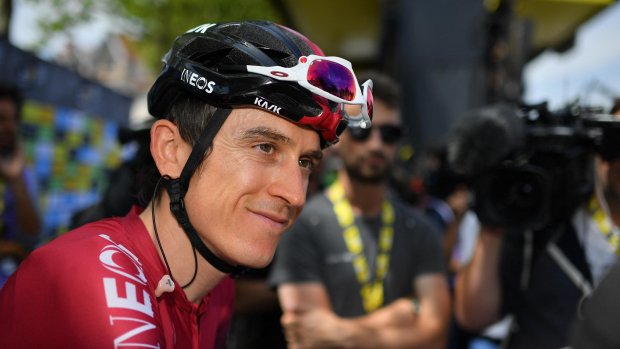 Geraint Thomas feels in a good place heading into Giro d'Italia on Saturday.

Thomas will-line up with his Ineos Grenadiers team-mates just one day after his son’s first birthday while wife, Sara, will celebrate her 30th birthday on the final Friday of the race.

“I am missing two quite big milestones there. I’m not missing those for no reason,” said the 34-year-old.

Thomas heads into the Giro as one of the favourites – not just because this year’s revised and delayed race includes three individual time trials.

The Cardiff-born rider showed he was hitting form with second place at the Tirreno-Adriatico stage race earlier this year, behind fellow Brit Simon Yates who will be one of his big rivals over the next three weeks.

And Thomas finished fourth at the World Time Trial Champs in Imola last Friday despite riding the 37km route wihtout any power info after his bike computer was mislaid.

“I’m always on my knees by the end of the season after a typical year. But obviously, this is anything but,” added Thomas, who did not ride Le Tour after a disappointing outing on the Criterium du Dauphine.

“Going up into the Giro I am happy where I am. Tirreno was really good just for the confidence as well as just a good eight hard days of racing.

“I think just that extra time that I had to lose a bit of weight as well and to get the extra race days in. It helps a lot.

“And I am happy with where I am. I am really looking forward to getting into the Giro now and getting going. Having three TTs should also suit me.”

Thomas insists he was quickly over the disappointment of missing out on Le Tour amid his form issues and not wanting to be a support rider.

And adding a second Grand Tour title would be a major achievement having looked to be in contention the last time he rode the Giro, in 2017, until a crash wrecked his hopes.

“The initial disappointment was more that it was just the first real time I’d not hit my target for the year,” added Thomas.

“I knew I wasn’t in the shape to challenge for the win, that was the disappointing thing, but I could have an easy week, go back to Cardiff and see my son and switch off for a few days and then get back into it and build-up to the Giro.

“As soon as I was back out in Monaco and starting the whole Giro project I was motivated and good to go then. It gave me a bit of new impetus.

“It’s nothing about proving anything to anyone, it was a decision that Dave (Brailsford, Team Ineos boss) and myself made together after the Dauphine. It actually gave me a new lease of life as well.”