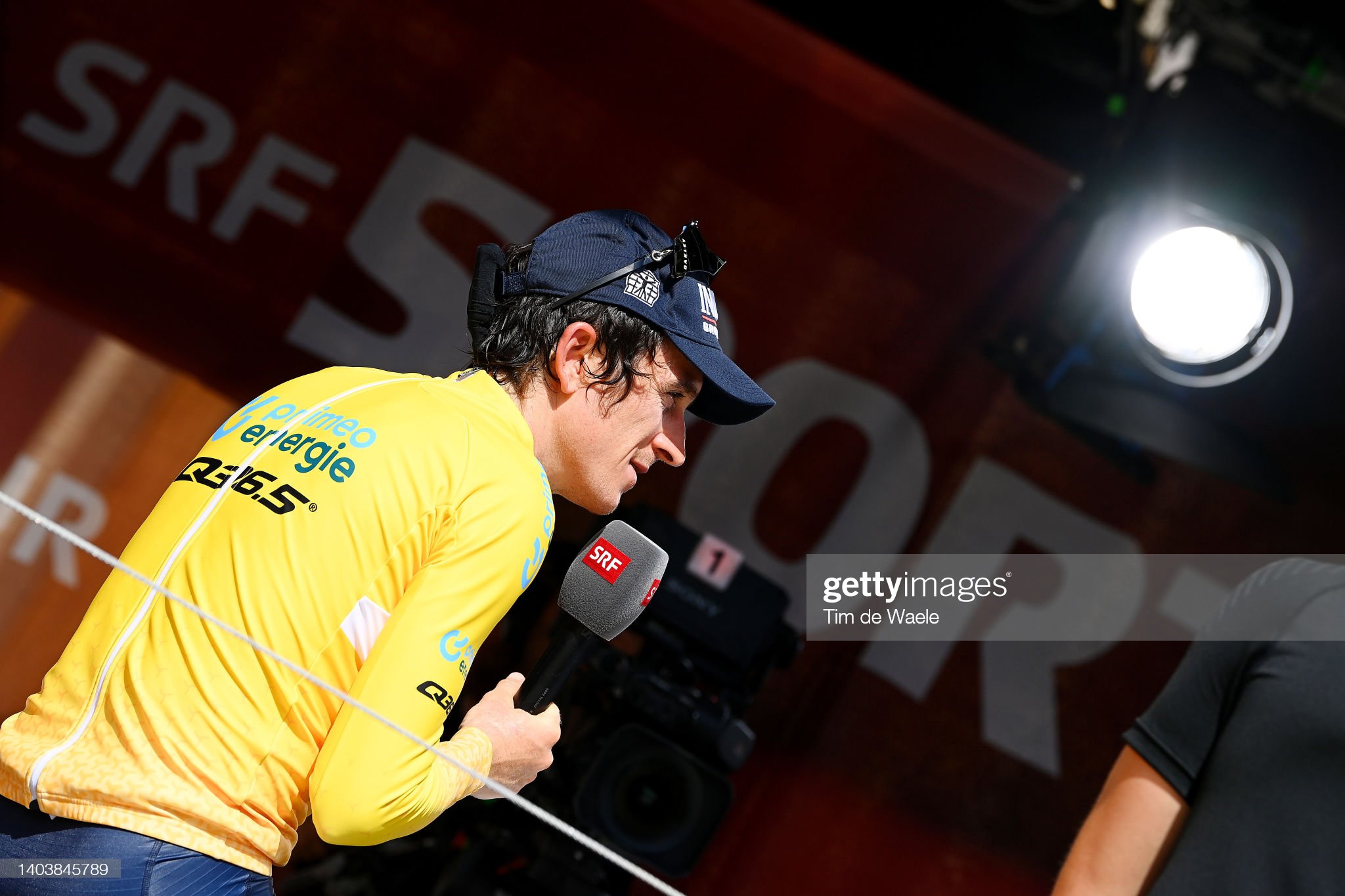 Geraint Thomas speaks to the media on the podium ceremony after the 85th Tour de Suisse. Pic: Getty Images.

Geraint Thomas is ready for another crack at winning the Tour de France after underlining his return to form with victory at the Tour de Suisse.

The Welshman, who won cycling’s biggest race four years ago, says he is ready to lead Ineos Grenadiers after doubts all year over whether he would be the team’s main man.

That status would leave Thomas well-place to battle for his second Tour de France title at the age of 36 after he proved in Switzerland he is back to full fitness following injury issues earlier in the season.

Asked after his triumph in Vaduz – that made him the first Briton to win the Tour de Suisse – whether he was ready to be Ineos team leader, Thomas said: “I’m easy. I just want to go there, race hard and do what I can.

“We’ve got two other leaders in the team. Whether I stay up on GC for a while to play another card or go for stages or help other guys – whatever, I’m happy do whatever.

Geraint Thomas is now the proud owner of a bloody massive egg timer after becoming the first Brit to win the Tour de Suisse.https://t.co/5IxYTLqV6S

When the former Maindy Flyers rider was asked if Ineos can challenge the Slovenian pair Tadej Pogacar (UAE Team Emirates) and Primoz Roglic (Jumbo-Visma), Thomas said: “I think as a team we can, for sure.

“Man versus man is definitely a different story. They’re super talented and as we all know, they’ve been the MVPs of the couple of years.

“But I think we’ve got a strong team. It’s just about staying healthy now, which is easier said than done these days.

“But we’ve got a strong team, we’re all motivated, and we’re all going to go there and give it our best.”

Thomas finished second in the individual time-trial in Vaduz on Sunday as the former pupil of Whitchurch High School in Cardiff finished the final stage of Switzerland’s biggest road race three seconds slower than Remco Evenepoel, but it was enough to claim the overall victory.

Thomas began the final stage two seconds behind leader Sergio Higuita after finishing fifth on the penultimate stage but the 2018 Tour de France winner scorched around the 25.6km course to claim the spoils.

Higuita managed to limit his losses sufficiently to take second overall, 1min 12sec behind Thomas and four seconds ahead of Jakob Fuglsang.

Neilson Powless withstood a late bike change to secure fourth place in the general classification, while Stefan Kung moved up to fifth overall thanks his third-place finish in the time-trial.

The Tour de Suisse, one of the last major warm-up races for the Tour de France, was hit mid-race by a host of Covid withdrawals including Britain’s Olympic mountain bike champion Tom Pidcock and his Ineos teammate Adam Yates.

In 2018, Thomas’ overall victory at the Critérium du Dauphiné prefigured his eventual triumph at the Tour de France. On Sunday, the 36-year-old downplayed the idea that he was in the same form again.

“I don’t know about that, but it’s nice to get the win,” said Thomas.

“From the Tour last year to the end of the season was really hard, probably the hardest period of my career.

“At the start of this year, I was slightly on the back foot but I just enjoyed the racing and being with the younger guys on the team and building up. It’s super nice to be at the pointy end again.”