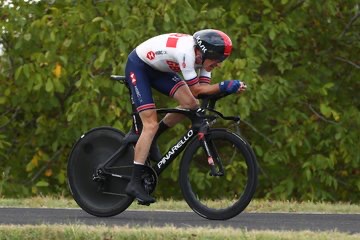 Geraint Thomas on his way to fourth place over the 32km course in Imola.

Geraint Thomas just missed out on a medal as he blasted to fourth place at the UCI World Time Trial Championships at Imola in Italy.

The Cardiff-born rider missed out on the bronze on his debut for the GB team in the TT at the championship by just eight seconds.

Thomas clocked a blistering 36 mins 31.12 secs to take over the hot seat at the grand prix track.

The route for the second Grand Tour of the season includes three individual races against the clock.

Thomas had shown his return to form earlier this month when he finished second at the Tirreno-Adriatico.

And he again demonstrated why he will be a threat at the Giro as he looks to bag the second Grand Tour victory of his campaign.