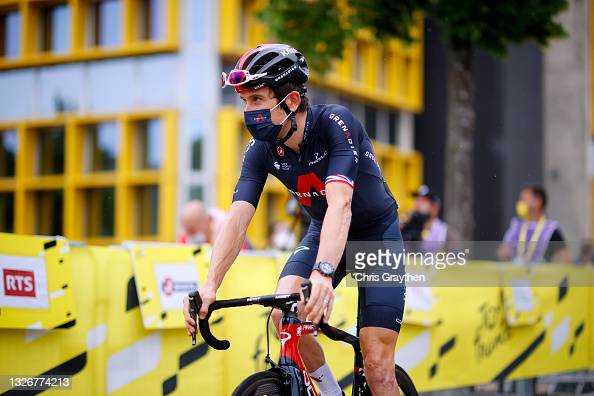 Geraint Thomas set to decide on Monday if he will continue in the Tour de France. Pic: Chris Graythen/Getty Images

Geraint Thomas is set to sit down with his Ineos Grenadiers team bosses on Monday’s much-needed rest day of the Tour de France to decide if he will continue.

Thomas lost 35 minutes on Saturday as the race hit the rain-lashed mountains as he continued to battle having dislocated his right shoulder in a heavy crash on stage three.

He eventually crossed the line 19th, 9:41 down on stage winner Ben O’Connor of Australia who catapulted up the standings into second place overall.

The 35-year-old is set to compete in the road race and time trial at the Tokyo Olympics – and having seen his Tour ambitions cruelly ended he could consider targeting the Vuelta a Espana.

“To be honest I can’t see today being much different than yesterday,” Thomas said in a pre-race interview before the second and final day in the Alps.

“We’ll get stuck in and see what happens and I can sit down with everyone tomorrow and make a decision.

Thomas was dropped early on Saturday’s stage and could never recover given the pace of the front runners and the effects of his crash.

And the Cardiff-born rider admits it was a battle mentally as well as physically having sacrificed so much to get himself in shape to challenge for a second Yellow Jersey.

He added: “It was just a long day. It was hard, mentally more than anything because I came here to try to be at the top of the thick end of the race.

“To be back in the grupetto was not enjoyable but it was just what I had.

“I think the crash has taken a lot more out of me than I thought.

“It was a hard stage, hard start, I was out the back of it straight away and out the arse and that was it,” Thomas explained.

“Wet roads, up and down, real solid day. They were racing in front the whole day so I had no chance to get back or even come out of a bad patch.

“After a lot of hard work since January to finish 33 minutes with the sprinters is not really what I wanted.”

“It’s tough, it’s tough on the head as much as anything as well, there’s been a lot of sacrifices and that, got through it anyway, tomorrow is another day.”

The Slovenia has since decided to quit the race to refocus on the Olympics next month.

“We took the decision altogether with the team, it doesn’t make sense to continue the way it was going at the end,” Roglic said in a statement from his team.

“Now we’ll definitely try to recover and focus on the new goals.”