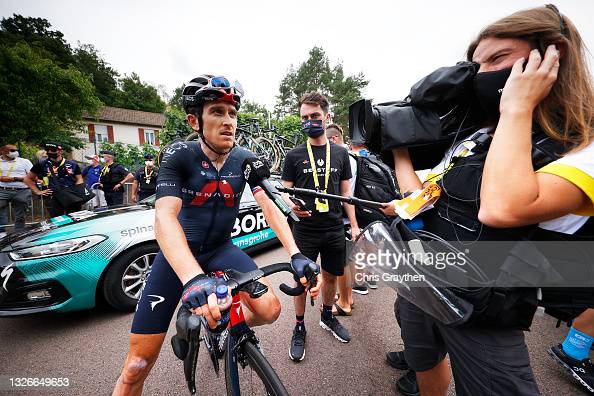 Geraint Thomas could not think it's time to quit Le Tour and rest before the Olympic Games. Pic: Chris Graythen/Getty Images

Injured Geraint Thomas saw any lingering hopes of challenging for the Tour de France ended as he finished 35 minutes down on stage eight.

The 2018 champ’s brave effort to continue riding after dislocating his right shoulder on stage three finally took its toll as the race headed towards the Alps.

The question now is whether Thomas will abandon Le Tour to rest and recuperate before the Olympics where he is scheduled to compete in the road race and time trial in Tokyo.

The Cardiff-born rider could also then consider a crack at the last Grand Tour of the year, the Vuelta a Espana.

Thomas, though, said last night that he planned to be on the start line for another day in the Alps on Sunday.

“After all the hard work I hoped to hit the first mountains in the Tour harder,” he said in a twitter post.

“I’ve tried to ignore the effects of my crash but it’s taken more out of me than I thought.

“Today hurts, but tomorrow is a new day.”

Thomas had clung onto his hopes of Friday’s stage seven where he was distanced before fighting back to finish alongside his main rivals to lie 13th overall, 5:29 down on the Yellow Jersey.

But even before the peloton hit the high Alps on Saturday, Thomas was in trouble, being dropped on the sharp six kilometre uncategorised climb at the start of the stage.

The 35-year-old eventually crossed the line fourth from last, 35:01 minutes down on the stage winner Belgium’s Dylan Tuens – and just inside the time cut.

Thomas was in good company with his group including green jersey leader Mark Cavendish and four-time champ Chris Froome.

Slovenia’s Primoz Roglic, like Thomas a heavy pre-Tour favourite but who also suffered a nasty crash on stage three, was also in that pack.

It is Slovenia’s defending champ Tadej Pogacar who looks certain of a second Yellow Jersey with his fourth place on the stage propelling him into the lead of the race by 1:48.

Thomas’s Ineos Grenadiers team had started the race reckoning they had four riders who could challenge for the coveted jersey.

But just eight days into the three-week race their hopes are in tatters with Ecuador’s Richard Carapaz blown away by Pogacar in the Alps. He is 6th but more than five minutes down.

2 thoughts on “Injured Geraint Thomas’s Tour de France Hopes Ended In Alps…..But He Vows To Battle On Despite Olympics Being On the Horizon”