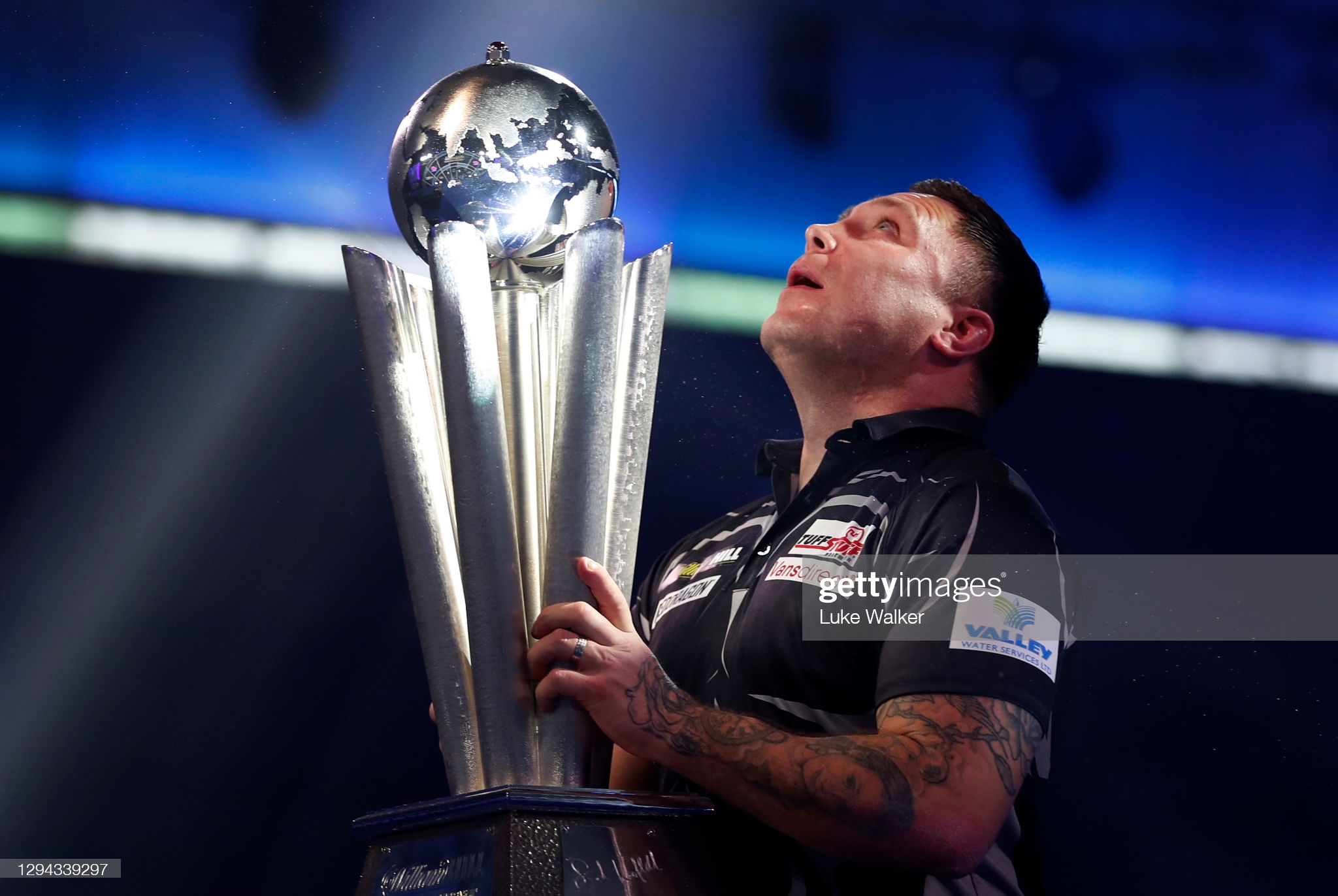 The triumph of Gerwyn Price last weekend wasn’t just a victory for Wales on the international stage, it was a win for re-invention. Fraser Watson salutes darts’ new world champion and pays tribute to other Welsh sports stars who swapped horses in mid-stream but still reached dry land.

When Richie Burnett – who was known as “The Prince Of Wales” – decided on a new moniker, he went for a time, under the label, “The Dartist Formerly Known as Prince”.

Which just shows that transformation in darts is very possible, even for former world champions.

And then along came, Gerwyn Price – perhaps one of the great transformational stories in Welsh sport, never mind just darts.

For all the disruption sport here continues to endure, last Sunday ensured we kicked off 2021 with the crowning of a new world champion. Our fifth overall in the sport, but our first to derive from the PDC organisation, and arguably, our most compelling.

For Price is the kind of individual who serves as a symbol of hope to mere mortals.

During his epic 7-3 win over Gary Anderson at the Alexandra Palace, where a relentless display was only momentarily tainted by finish line trepidation, he engrossed.

When he aimed his frequent celebratory screams towards the camera lenses – in Wales we screamed with him.

Many outside our country lambast him, of course – maybe even some within it.

From afar he is the meathead, the shouter, the former rugby hooker who needlessly bands about aggression in a non-contact sport.

He’s your pantomime villain who those in fancy dress will jeer for the sake of jeering.

But to those who have cared to study his unlikely pathway to the top, he captivates. He has you believing it’s never too late.

He has you contemplating whether you could switch sports and excel. He has you digging out a rickety darts board and obsessively trying to hit double tops.

Well, at least since Sunday he has.

And every grassroots club front row forward who likes a casual throw and a pint as a relaxed Friday night warm-up before a game will now dare to dream – and not just about pubs reopening.

That notion grossly undersells Price, of course. His rugby career fell short of elite, but it was no flash in the pan in, either.

Spells in the Welsh Premiership with Neath and Cross Keys, Pro12 appearances with Glasgow Warriors, and a switch of codes to the South Wales Scorpions – it all would have left little time for anything more than recreational darts.

By the time he decided to prioritise arrows over studs in 2014, he was 29. Hardly past his sell-by date in a sport where Phil Taylor was playing in a World Championship final at 57 – but a statistic which makes his ascent to the summit yet more remarkable.

To make a high level transition from one sport to another is difficult enough. To go from a game where physicality and combativeness reigns to one where poise, composure, and accuracy under excruciating pressure is mandatory – and ultimately conquer the latter – borders on sensational.

Indeed, Price’s success has prompted much talk of the dual professional sportsmen and women that Wales can lay claim to.

Some have had more exposure than others, inevitable given the contrasting eras, but knowing full well many worthy examples will be omitted, here’s a selection:

Played for Wales and the Lions, excelled at national level in athletics, and boxed Rocky Marciano. Jack Matthews won’t be known to many in the modern era, but when he died in 2012 aged 92, he did so having racked up quite the sporting CV.

At centre, he played 17 times for his country and six times for the Lions on the 1950 tour to New Zealand and Australia. Arguably, rugby curtailed his running exploits – as a junior he won the Welsh AAA junior 220 yards title, and at senior level was second in the Senior Men’s AAA 100 yards and third in the 220 yards races.

At 23, whilst serving in the RAF, he fought Marciano in an amateur bout and believe it or not, held him to a draw.

Matthews isn’t the only Welshman to have excelled in both athletics and rugby – in fact, Walker went a lot further with his track and field career before making the switch.

A 110-metre hurdler, he represented Great Britain at the 1984 Olympics in Los Angeles and six years later, was fifth in a Welsh vest at the Commonwealth Games.

In between there were bronze medals at both the European and World Indoor Championships in 60 metre hurdle races.

Having failed to make the 1992 Olympics though, aged 28, he turned his attentions to rugby. More than 121 games for Cardiff and 17 caps for Wales later, it’s fair to say the change was justified.

Signified by his searing pace and finishing ability, he would become a cult hero for club and country, with the most famous of his 12 international tries coming in the home win over France that set Wales up to win the 1994 Five Nations.

Sadly, injury would rob him of a World Cup appearance the following year.

Halting international progress in one sport to focus on doing the same elsewhere is one thing – doing it in two sports simultaneously is another.

Nia Jones captained Wales in netball at under 17 and 21 level, and went on to represent her country at senior level in the 2013 Europe Open Championship – and both the 2014 and 2018 Commonwealth Games.

In the meantime, her football career was also flourishing. A Welsh Under 21 international, stints at Cardiff City and Reading followed and she would go on to win senior international caps before signing for Yeovil Town in 2017.

It was then however, she opted to put the 11-a-side game on hold to concentrate further on playing for the Celtic Dragons in the Vitality Netball Super League.

The adaptability didn’t end there, however. Some eye-catching displays at the latest Commonwealth Games on the Gold Coast saw her picked up by Cross Coders, the body responsible for Australian Rules football for women, and she would later return Down under for an intensive rookie camp.

One of our more understated dual sportsmen, and yet one whose name stands alone in the history books.

Bruce Tasker was a young athlete with immense potential. Specialising in the 100m, 200m and 400m disciplines, he won national titles at youth level and in 2006, aged 19, he represented Great Britain at an event in Loughborough.

Eventually the 200m became his primary focus, but despite a bronze medal in the British Under 23 Championships, he would walk away from the sport in 2009.

And subsequently walked into something very different. Whilst studying at the University of Bath in 2010, he was coaxed into the sport of bobsleigh.

He would become part of the four-man teams which represented Great Britain at the 2013 World Championships and 2014 Bobsleigh European Championships, winning silver in the latter.

But it would be the 2014 Winter Olympics in Sochi that would define his career – eventually.

Part of the GBR1 crew that finished fifth, the belated disqualification of two Russian crews for doping offences ultimately pushed the British quartet into third.

It would be some five years later when Tasker and co were actually awarded their bronze accolades, and Wales could finally celebrate a first ever Winter Olympic medal winner.

Mixed with the elite in two sports? Three? In this case, try four.

A combination of pace, raw power, and positional intelligence meant she could switch regularly between the centre, wing, or full back.

And she could make other switches, too. She won silver at both the 1992 and 1996 Commonwealth Judo Championships and competed for Wales at the 2002 Commonwealth Games.

The latter event, in Manchester, also saw her become the first woman to compete in two sports at the same games – finishing ninth in the weightlifting under 63kg class.

She wasn’t done there. In 2010, she would become the first woman to participate in three sports in the Commonwealth Games after being selected in the Welsh wrestling team to go to Delhi.

When she did finish competing, work in broadcasting and personal training followed.

Well, she was hardly going to do nothing, was she?