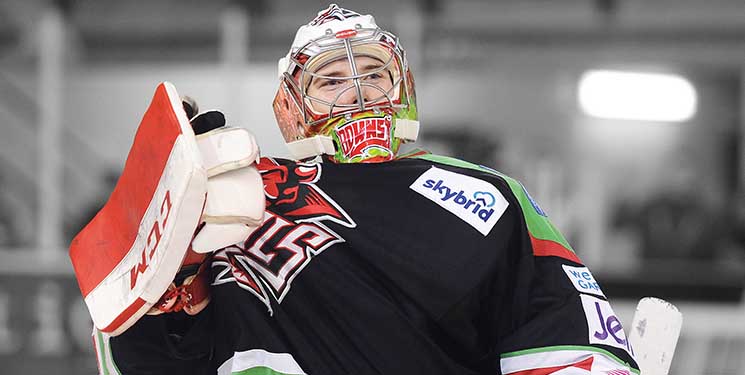 Netminder Ben Bowns has committed to Cardiff Devils for the 2019-20 Elite League season.

Yorkshireman Bowns has been a key player for Devils over the last five seasons, helping the Welsh club to win a haul of trophies.

He has also been a crucial part of the Great Britain team in the top division of the World Ice Hockey Championships.

“There is no club I want to play for in the UK besides Cardiff,” says Bowns. “This team, the management, coach and owners have looked after me for five years now and helped me improve into the player I am today.

“Wales has become home for me and my fiancée and we are so happy here.”

Head coach Andrew Lord is delighted to have signed Bowns, who has attracted big interest around the World with impressive performances for club and country.

“Ben is so valuable to this team,” said Lord. “What he has achieved here is nothing short of extraordinary and then add to that what he’s done with Team GB.

“He is our last line of defence and gives the guys in front of him a lot of confidence.

“He played a lot of hockey last season and then added even more games with Team GB at the World Championships where again he played great.

“He wants to play every night, is a competitor and we believe he is the guy that can lead us to more championships.

“Importantly, Bownsy is not just a great goalie, he is also a great guy who is popular among his teammates and famous for his jokes and pranks in the locker-room.

“He is loved by the fan base and just such a crucial part of our success here in Cardiff.

“I could not be happier that he’s back for another season.”

Bowns, aged 28 and from Rotherham, first joined the Devils back in 2014 when the Calgary-based ownership consortium headed up by Steve King took over the team .

The goalie has been a crucial part of the success Devils have enjoyed in the last five years, backstopping the team to two league titles, two play-off championships, two challenge cups and three conference titles.

Bowns posted a 91% save rate and 2.32 goals against average in 2018-19 while helping the team win another playoff trophy with a man of the match performance in the final where he saved 34 of the 35 shots he faced.

He played every league game and recorded a personal record of nine shutouts during the season, taking his total shutout record for the Devils to 29 and breaking the franchise shutout record, previously held by Stevie Lyle (28).

Bownsy then led the charge for Team GB, who, after back to back gold medals, managed to stay in the top division of the World championships with a big win over France on the final game day.

He made 230 saves during the tournament, setting a new record for most saves at the group stage of the IIHF world championships.