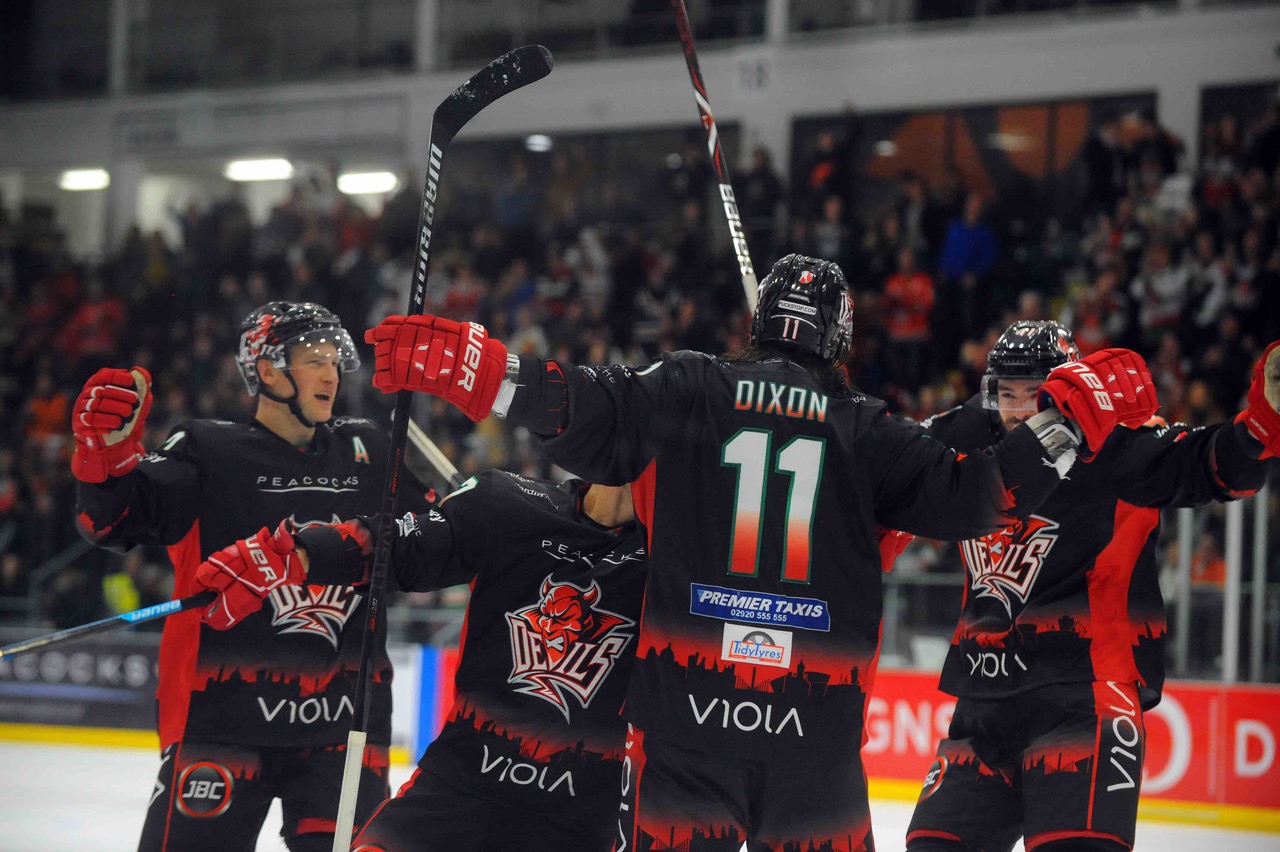 Hats off to Gleason Fournier. The man from Rimouski, Quebec deserved to hit treble top, but hat-trick hopes were dashed when his third ‘goal’ touched Stephen Dixon’s on the way in.

“Gleason scoring our first was huge for the game and him personally,” said head coach Andrew Lord. “

“Then he scored again and added a third which was taken away because it went in off Dixon’s stick.

“A fun night, a fun win. Matches against Sheffield Steelers are always entertaining.”

Devils fans threw hats onto the ice when they thought, along with virtually everybody else at the Viola Arena, that Fournier had completed his treble, but the Canadian won’t worry too much.

He was man of the match and played crucial role in a massive Devils home win.

Cardiff are fourth in Elite League, but have played fewer games than any other team and are within reach of top spot.

“It was a huge win for us,” said Lord. “I wasn’t overly thrilled with our first five minutes, while Sheffield were hard, fast and effective.

“We grew into the game and generated good chances.

“The key to our season is consistency and I saw a lot of hunger from the guys during the week. We weren’t at our best, but found a way to win against Sheffield.

“There was a a lot more composure from us in the third. We did not generate much, but against a high power offence which is clicking right now it was a really good, solid approach.

“I loved buy in. Guys knew what they needed to do and it was good game management with a one goal lead.”

The first period was stop and start with referees Matt Thompson and Stefan Hogarth involved far too much, handing out 134 minor penalties over the 20 minutes.

Nikolai Lemtyugov beat Ben Bowns from close range with a quick wrist shot at 4-59 on the powerplay to open the scoring, while Devils levelled at 15-46 when Fournier fired a powerplay marker of his own to tie the game.

Brendan Connolly put Steelers ahead again when he tipped in Ben O’Connor’s shot four minutes in to the second before Masi Marjamaki sacred at 27-59.

Devils went ahead for the first time 31 seconds later through Fournier and Marek Trončinský tied things up at 32-02.

Fournier’s ‘hat-trick’ goal after 36 minutes sparked celebrations among home fans and their team kept things tight in the third to earn a crucial victory.

“The game was similar to the game we played against Cardiff at home,” said Steelers coach Aaron Fox. “In fact I thought we were even better this time.

“We played close to a full 60 tonight, we really battled hard, we outplayed them and out-chanced them but unfortunately we doidnt score the goals we needed to.

“We gave up three on seven shots in the second and that hurt us.

“We just couldn’t find that timely goal in the third to tie the game up, but it was a good team performance on a night when we were missing two first line guys.”

Devils are in action again on Sunday evening, away to Guildford Flames.

Man of the match: Gleason Fournier