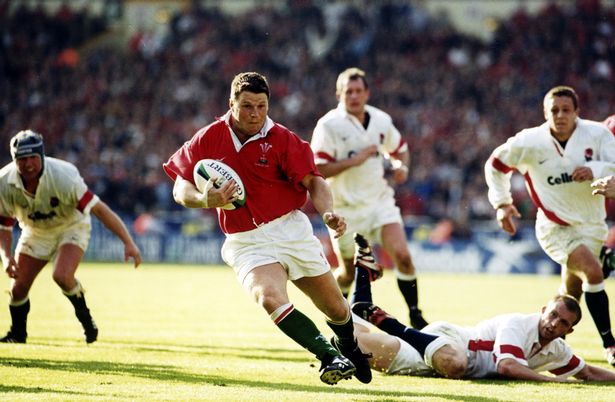 The awesome foursome have made it through to the semi-finals of the Welsh Rugby Union’s online challenge to find the nation’s favourite score.

The top 16 have now been whittled down to a quartet of classic tries, with two from the Seventies against a Nineties icon and a recent gem from this season.

Three of the four tries were in victories, while the Justin Tipuric try in this year’s game against England was in a defeat – albeit in a game in which Wales scored more points than ever before at Twickenham.

The dancing feet of Scott Gibbs paved the way for an incredible and iconic try at Wembley that helped Wales beat England and deny them the Triple Crown, Grand Slam and Championship.

England’s head coach had already asked which way his team should go after the final whistle to pick up their trophy, but Wales had one final trick up their sleeves.

The No. 8 juggled the pass before feeding Gibbs 25 metres out. He burst through the first line of defence and sidestepped his way past everyone else, leaving Tim Rodber, Neil Back, Matt Dawson, Matt Perry and Steve Hanley trailing helplessly in his wake.

Gibbs on his ’99 try 🏉 “We had this play that was reminiscent of something we did with great success at @Saints1890 where Bobbie Goulding would run across the face of the defence then you would find opportunities by players coming on an overs play or unders play.” #GibbsvEdwards pic.twitter.com/hQrS7sTAY5

“It was late in the week before the match when myself, Scott and Rob Howley came up with a series of potential opportunities depending on how the game went and the defence set up.

“We had this play that was reminiscent to something we did with great success at St Helens where Bobby Goulding would run across the face of the defence and then you would find opportunities by players coming on an overs play or an unders play.

“You’d often find someone of great strength on the outside and we were hoping that would be Gareth Thomas hitting the 15m channel.

“There was nothing left in the playbook – this was the hail mary. It was Scott Quinnell’s ability to catch the ball and juggle it that focused the defender on him.

“I found a seam and flossed my way through and the rest is history.”

There were still 70 metres to go when Gareth Edwards got the ball from a line-out maul on his 22, but there was only one thing on his mind – attack!

He spotted an opportunity on the narrow side and handed-off his British Lions team mate Rodger Arneil and exploded up to half-way.

The crowd sensed something special was on and roared their approval. He chipped over Scottish full back Arthur Brown and then hacked the ball the length of the 22 to the right corner.

“Can he score? It would be a miracle if he does,” pronounced Bill McLaren in his commentary.

His dive beat two more Scots and he went head over heels in the mud as he scored.

“You can’t get any better than that in international rugby,” was McLaren’s pay off line. He was right.

Edwards on his ’72 try 🏉 “My old rugby teacher said I’d score a long range try for Wales one day. When this one started I didn’t have any thoughts of scoring … As I got up, with my face still caked in that red, Arms Park mud, my mother thought I’d cut my face.” #GibbsvEdwards pic.twitter.com/wzlv0QDJpk

“My old rugby teacher, Bill Samuel, said I’d score a long range try for Wales one day. When this one started I didn’t have any thoughts of scoring – I just wanted to ease the pressure Scotland were putting us under.

“They’d done really well in the first half, it was one try each at the break, and then we got another one early in the second half. That really lifted the crowd and I wanted to ride that surge.

“Mervyn Davies stole a Scottish line-oout on our 22 and I just thought I’d have a little dart rather than kick the ball away. I handed off Rodger Arneil and suddenly found myself in open space.

“I kept looking around for Dai Morris, who always somehow managed to get on my shoulder in those situations, but he had been tied up in the ruck. As I got to half-way I just thought I’d keep going to try to maintain the pressure.

“A chip over the top of their full back and then a hack up to the 22 kept the move going. Then the second hack on made the ball veer to the corner flag. That’s when I thought ‘I can score here’.

“I had Jim Renwick and Lewis Dick chasing me and the ball and I just dived to try to reach it before it went dead. I think all three of us dived at the same time and the momentum made me go head over heels in the mud.

“As I got up, with my face still caked in that red, Arms Park mud, my mother thought I’d cut my face. She was looking at the TV through her fingers clutched to her face.”

Three classic Welsh sidesteps, a jack-hammer hand-off and a brilliant pass under pressure combined to produce a try from their own 22 for Wales skipper Phil Bennett that helped to secure the third Triple Crown of the Seventies.

Steve Fenwick launched a counter-attack from his 22 and Gerald Davies broke the Scottish defensive line with two sidesteps and a hand off that allowed him to free Bennett.

David Burcher was in on the act on the right wing and his overhead pass inside to co-centre Fenwick came on half-way.

Fenwick was confronted by Alastair McHarg, but in the blink of an eye he somehow passed back inside to Bennett on the home 22.

Bennett had Bill Gammell to beat and one final, magical sidestep took care of him. “Oh, this is going to be the try of the Championship,” pronounced Bill McLaren in commentary.

Bennett on his ’77 try 🏉 “People asked whether it was a pose with the ball under my chin but it wasn’t. I was knackered and relieved… Factories and mines were closing and people were losing their jobs, yet the commitment to watching Wales play was incredible.” #BennettvTipuric pic.twitter.com/waM9luffCI

“I didn’t score that many tries for Wales. I got one against Ireland at Lansdowne Road and then two against France in 1978 when we won the Grand Slam, but they were both five yarders.

“So, the try against Scotland is the one that gets talked about the most when I meet people. It clinched the Triple Crown and in those days the Triple Crown was more of a respected achievement than perhaps it is today.

“Wales were going through some tough times economically back then. Factories and mines were closing and people were losing their jobs.

“Yet, the commitment to watching Wales play was still incredible. I can remember on Saturday morning in Edinburgh, standing on a balcony in our team hotel and looking out along the length of Princes Street and seeing a sea of supporters, dressed in red shirts or scarves, or rosettes.

“I realised how much effort they had gone through and I thought, ‘we can’t let these people down’.

“The try itself is still memorable. Andy Irvine kicked the ball away to JPR and I thought, ‘he’s made a mistake there.’ Gerald Davies produced some magical sidesteps, beat three or four men, and put me into a bit of space. I had David Burcher outside, found him, and he floated a beautiful high pass back inside to Steve Fenwick.

“Steve took man and ball, but, incredibly, got the ball away back to me. I had two guys in front of me and managed to beat them both with a step.

“One of them was the great Ian ‘Mighty Mouse’ McLauchlan. He was a hard man, was Mouse, who loved scrummaging and I was shocked to see him back near his own 22 trying to cover.

“Thankfully, they bought the dummy and I was away to the posts. People asked whether it was a pose with the ball under my chin, but it truly wasn’t. I was knackered – and relieved.”

“Tipuric, a charge for the line – oh, it’s the perfect start to the second half for Wales. That is a glorious try from one end of Twickenham to another,” roared Nick Mullins in commentary.

Wales trailed 20-9 at half-time at Twickenham and needed a fast start to the second half. Back row ace Justin Tipuric ensured they got just that.

George Ford’s re-start went deep to Nick Tompkins in the Wales 22 and the centre opened up. He set Josh Navidi free on the right wing and then took a return pass.

Another inside offload allowed scrum half Tomas Williams to race over half-way and he drew the last man before giving Tipuric a 30 metre race to the posts.

Henry Slade couldn’t catch him. There were only 23 seconds on the clock and Wales were back to within five points with the conversion. It was the start of a brave fightback that ultimately just fell short.

Tipuric on his 2020 try 🏉 “We’d spoken about starting well in the second half and we couldn’t have started much better than that! As a fan of good team tries, it shows we have continually scored some good tries over the years. It was a good thing to be part of.” #BennettvTipuric pic.twitter.com/0wiuzp29E0

“It was instinctive. The boys made a good break, we managed to get the try, but it is a shame we didn’t manage to kick on afterwards. I was just lucky enough be inside of the other guy’s great work.

“Nick Tompkins and Josh Navidi exchanged passes before Tom Williams passed it to me at the end, drawing the last defender so I didn’t do anything to be honest.

“As a fan of good team tries, it shows we have continually scored some good tries over the years – it was a good thing to be a part of.”