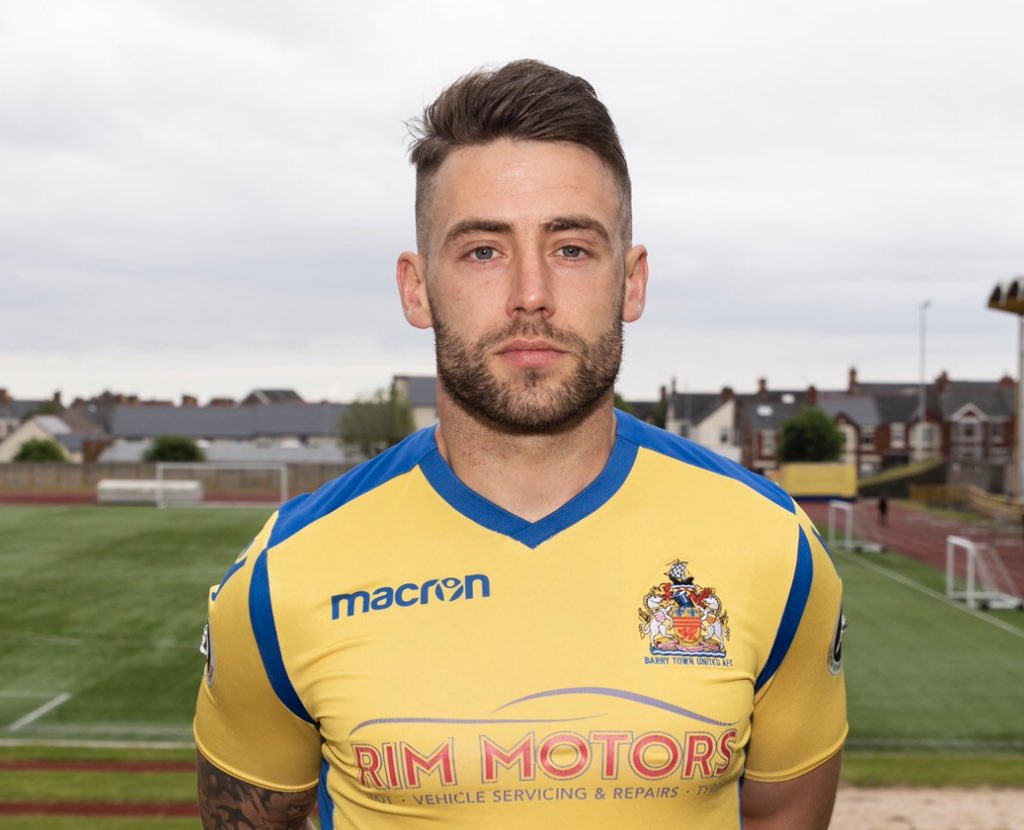 Welshman Jack Compton is back in Barry – and this time he won’t be working at Gavin and Stacey’s waterfront cafe.

He is a second new summer signing for manager Gavin Chesterfield following the arrival of Carmarthen Town defender Luke Cummings.

“It’s no secret I’ve wanted to bring Jack to the club for some time,” said Chesterfield.

“His pedigree and background stand for itself and I’m delighted to have him at the club ahead of our Europa League Campaign and JD Welsh Premier League season.”

Compton is delighted to have joined Barry, saying: “Absolutely over the moon to have signed for my hometown club. Been a long time coming and thrilled.

The last time Compton worked in the Vale of Glamorgan he was serving ice cream, coffee and cakes at Marco’s Cafe on Barry Island at a time when his playing career was at a low ebb.

“People will know Marco’s as the place in the Gavin and Stacey television series,” says Compton. “My mate’s dad owns it. Working in the cafe and digging local gardens helped keep me stay fit. I was earning about £50 a day and it kept me ticking over.”

Compton also played part-time for Conference South club Weston-super-Mare after plunging out of professional football a decade ago.

The winger, now aged 30, had started his career at Portsmouth at the age of 13, stayed four years, and then moved to West Brom. He feared for his future when Tony Mowbray released him from..

Compton said: “I thought my number was up. I was at Portsmouth and West Brom. Then the manager, Tony Mowbray, released me.

“It went downhill from there. I went to Brighton, but it did not really work out under Micky Adams.

“Then I went to Weston which gave me an insight into life outside the game. Football is a luxury and you do not realise what you had until it’s gone.

“I started at Portsmouth when I was 13 and was there until I was 17 when Mowbray signed me for West Brom.

“Harry Redknapp was boss when I was at Fratton Park, but did not really look at the young lads.

“I didn’t get a good opportunity at West Brom – I shattered knee cartilage in a friendly against Shrewsbury and was out five months.”

Falkirk scouts spotted playing for Weston after he regained fitness and invited the winger to Scotland for a trial.

“After my trial I expected the manager, Eddie May, to invite me back for another, but he offered me an 18-months deal,” says Compton. “I was totally gobsmacked and grabbed it with both hands.”

Compton, now aged 30, has played almost 200 first team matches during his career. His clubs include Newport County, Merthyr Town, Bradford, Yeovil, Colchester and Hartlepool, while he was with. Chippenham Town during 2018-19.

They drew 1-1 against Panjab FA in a pre-season fixture last Saturday and went down 6-1 in a second match, against The New Saints, on Tuesday.

That will be a difficult test for Barry. Ballymena finished second in the Northern Ireland League last season and were 17 points ahead of Cliftonville, the team Barry Town face in their Europa League preliminary round tie.

The winners of the Barry/Cliftonville tie will play FK Haugesund, who finished fourth in the Norwegian Eliteserien.

Barry’s first leg against Cliftonville will be played at Leckwith Stadium after Jenner Park’s 3G pitch was deemed to have failed its Fifa Pro testing.

Tickets for the first leg, on Thursday, June 27(6.30pm kick-off) are now available from Barry Town United club and the Football Association of Wales at £10 (adults), £7 (OAPs) and £5 (children).

The return game is at Cliftonville’s Solitude Stadium on Thursday, July 4 (7.45pm).