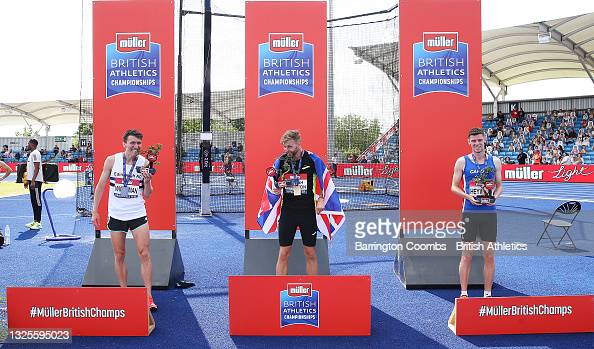 Welsh 1500m star Jake Heyward must wait and see whether he has done enough to book a place at next month’s Olympic Games in Tokyo.

The Cardiff athlete won bronze on day two of the Muller British Athletics Championships in Manchester, which doubles as the Great Britain Olympic trials.

Heyward must now hope he has done enough to persuade the GB selectors to hand him a further 1500m place available on the team.

Two Olympic qualifying times and a third place in the trials, should put the Oregon Track Club Elite athlete well into consideration at Monday’s selection meeting.

In Saturday’s final, which also featured Wales’ Piers Copeland, Heyward moved to the head of the field after an extremely slow first 400m while Copeland was content to stay near the rear of the pack.

Heyward led going into the last lap only to be overtaken by gold medal winner Kerr and second placed Wightman.

The Cardiff athlete held off a late challenge from Archie Davis and Charlie Da’Vall Grice to claim bronze in 3:42.41. Copeland, who also has an Olympic qualifying standard, finished 10th in 3:45.51.

Swan produced a consistent string of throws over 16m culminating in 16.98m in the penultimate route to earn his medal.

Newport’s Daniel Cork claimed bronze with a third round effort of 16.61m, which saw him just edge out Lewis Byng – who also threw 16.61m – thanks to his superior record overall.

Seary set a new national mark on her debut over the distance on May 29, with Cooper, lowering the record to 10:20.03 on June 9.

On Saturday, it was the Cardiff athlete’s turn to take the record once again when she clocked 10:11.06.

Unfortunately it wasn’t quite enough to earn Seary a medal as she finished fourth with Cooper crossing the line in seventh in 10:25.12.

Pembrokeshire’s James Tomlinson finished sixth in the discus final registering a best throw of 54.09m, while Amber Simpson was 11th in the hammer with 57.64.

Cardiff’s Cari Hughes claimed a new personal best of 4:16.19 as she finished seventh in the women’s 1500m final.

The men’s 100m semi-finals saw Jeremiah Azu clock a season’s best time of 10.38 to finish fourth in his heat and secure a place in the final.

The Cardiff athlete couldn’t quite reproduce that form in the final where he finished seventh in 10.46.

The Swansea Harrier is edging ever closer to the qualifying time of 56.90 for next year’s Commonwealth Games in Birmingham.

There was disappointment in the men’s 400m hurdles where 2011 world champion Dai Greene withdrew from his heat.

The championships continue on Sunday, kicking off at 10.30am with the men’s hammer final which features Welsh athletes Osian Jones and Jac Palmer.

You can keep up with live coverage of the championships on the British Athletics website.