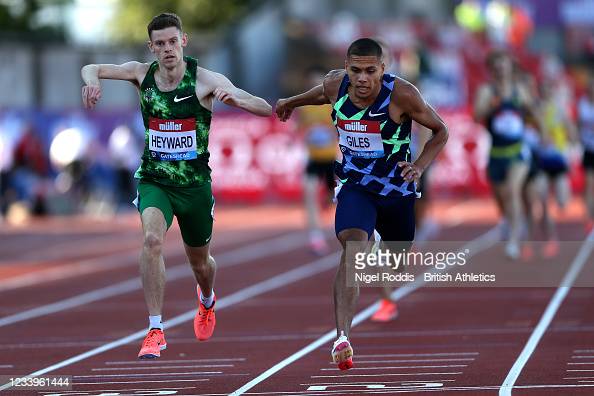 Jake Heyward warmed up for the Tokyo Olympics by running the fastest ever mile by a Welsh athlete at the Wanda Diamond League meeting in Gateshead on Tuesday night.

The Cardiff athlete took almost two seconds off Neil Horsfield’s 35-year-old record of 3:54.39, set in Ireland back in 1986.

But Heyward’s time of 3:52.50 brought the American-based athlete his second Welsh record of the season, having broken the 1500m best in May – a record also set by Newport’s Horsfield.

Jake Wightman, who like Heyward will compete for GB in 1500m in Tokyo, had been the pre-race favourite on Tuesday night in an event previously won by the likes of Sebastian Coe, Steve Ovett, Haile Gebrselassie and Hicham El Guerrouj.

But it was Giles who kicked for home on the final bend of the race, taking Heyward with him and leaving Wightman in their wake.

Giles enjoyed a clear lead going into the final 50 meters but Heyward was closing fast in the closing stages and looked to have just snatched victory on the line with a desperate lunge with his final stride.

However, the photo finish confirmed Giles, who will be contesting the 800m in Tokyo, had just held on for the win.

Asked about his performance after the race, Heyward said: “I 100 per cent expected that.

“My coach is obviously getting me ready for the Olympics and for the British trials I hadn’t really done any top end work – I was just wanting to get strong and ready to peak five weeks later.

“I expected to be in PB shape and everything is moving in the right direction. I’m finally healthy and I’m really enjoying running right now. The fitness is a bonus.

“I’m not going to lie, I’d have liked to have won. I finished strongly and I felt like I was going to get him but I just ran out of room.”

Fellow Welsh athlete Piers Copeland was also in excellent form finishing fifth in 3:56.13 – just outside his personal best of 3:56.05.