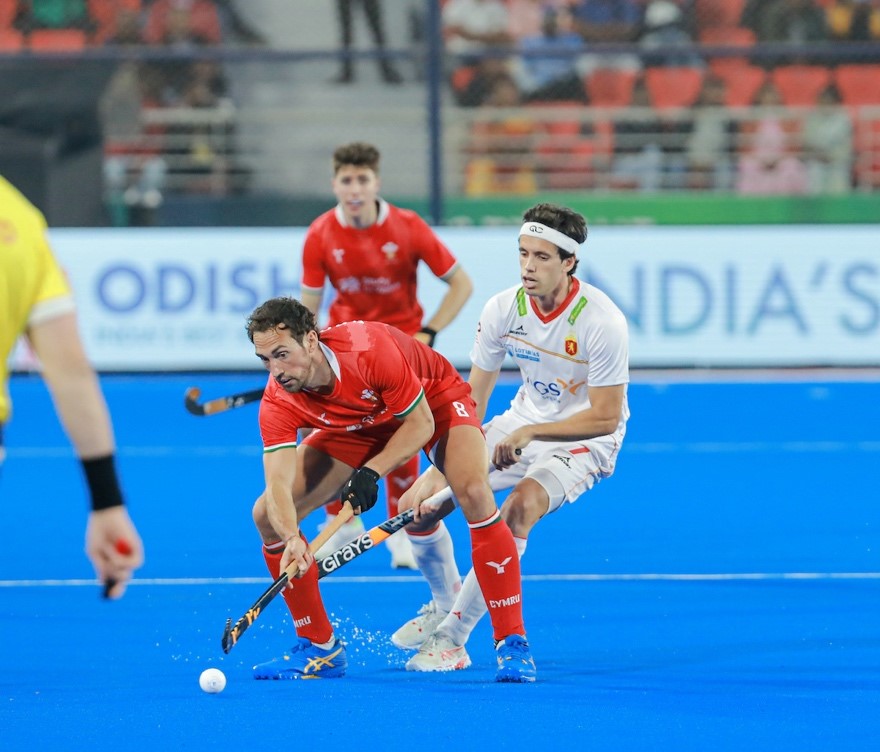 James Carson made history by becoming the first Wales player to score at the Hockey World Cup – but it was scant consolation for his team who were beaten 5-1 by Spain.

It was the second match of the tournament in India for Wales, but for the second time they leaked five goals.

At least there was no whitewash this time – as there had been with Friday’s 5-0 defeat to England – with Carson scoring in the fourth quarter, when Spain were leading 4-0.

It was a more aggressive performance from Wales at the Birsa Munda International Stadium than their meek opening pool match defeat to England.

But head coach Danny Newcombe will again be concerned at the ease with which his side ship goals at this level.

“I’m really disappointed to lose that game, and we feel frustrated not to be closer on the score board,” said Newcombe.

They are loving every minute of this ❤️ Family members of the Welsh hockey team @sportstarweb #HWC2023 @HockeyWales pic.twitter.com/OWMqqGGXTw

“It was definitely a significantly improved performance from the group today, particularly in quarter one and quarter four where I thought we were competitive.

“But at this level we get punished when we switch off or make small errors and Spain were incredibly clinical today. They took their chances whereas we need to create more with the ball.”

Wales must now earn an unlikely big win against hosts India on Thursday to keep alive their thin hopes of making the knockout stages of the tournament.

Spain controlled the game, but struggled to create opportunities in the Welsh circle.

However, they broke through in the second quarter when forward Marc Reyne received an overhead pass from Marc Recasens and, left unguarded by Gareth Furlong, scored past Toby Reynolds-Cotterill.

Side note, the India England game was superb, one of the best hockey games I have seen for a very long time. #HockeyWorldCup2023 #OdishaForHockey pic.twitter.com/STvqa5qLDL

Despite missing a penalty stroke before halftime, Spain continued to pressure Wales and added two more goals in the third quarter from Marc Miralles and Reyne.

Wales managed to get on the scoreboard in the final quarter with a goal from Carson, but Spain sealed the win with a final goal from Miralles.