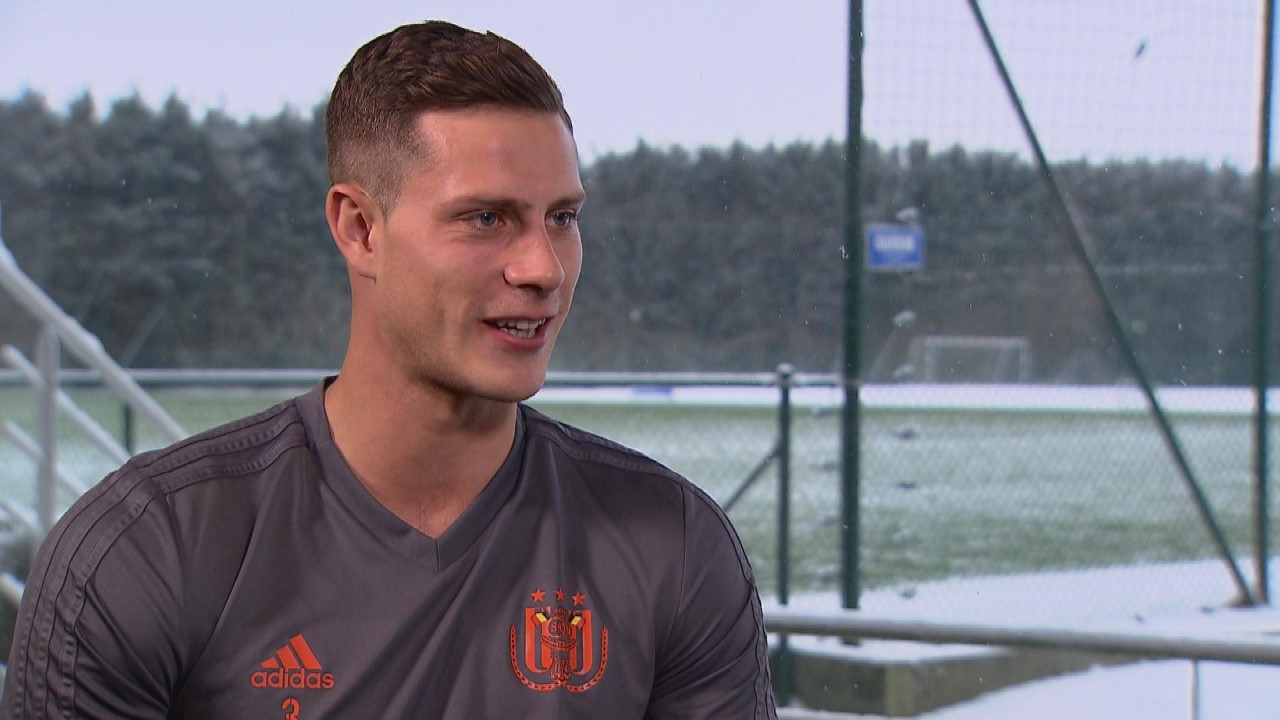 James Lawrence played in both Holland and Belgium before being picked by Wales. Pic: S4C.

Wales defender James Lawrence has revealed he would relish a move back to the UK from Anderlecht.

The Belgium-based centre-back – who made his international debut in November’s 1-0 defeat in Albania – has two years left on his current contract.

But after arriving as a left field selection in manager Ryan Giggs’ last squad, the 26-year-old has spoken of a desire to prove himself in the Premier League.

“It’s always been my goal to do the full circle and make it back there,” said Lawrence in an interview with S4C’s Mwy o Sgorio football series.

“I’m not sure how much further I’ve got to go. If it comes through, that’s great.”

Lawrence has followed a somewhat unconventional career path to date, having moved with his parents to Holland at the age of 16.

From there, where he was coached by Dennis Bergkamp at the Ajax academy, he found his way to the Slovakian top flight for three seasons before earning a move to Anderlecht, this season.

The Henley-on-Thames-born player – who qualifies for Wales through grandparents from Haverfordwest – had never set foot in Wales prior to his call-up.

But he aims to become a key part of the squad for the Euro 2020 qualifiers which begin later this year.

His international career may have begun with a friendly defeat against the Albanians, but Lawrence is anxious to become a central figure in Giggs’ plans.

“Despite the result, I came out the game feeling really good, which is a strange thing as well because I really hate losing.

“That made it more special, because there was a real buzz in the group, it wasn’t just another friendly – it meant something, which took it to a different level.

“He sent me a message once I was back in Brussels which was really nice of him, just saying well done, good luck at home and hope to see you next time, which I really didn’t expect. It just shows you the kind of guys you have in the group at Wales and how close everyone is to each other.

“I was pleasantly surprised when I got there at the level of professionalism. It was really top notch. Giggsy’s really relaxed with his players and I like that in a manager. Someone who’s really open and easy to talk to, if you’ve got a problem you can just say it.”

With a number of young British players now choosing to move to Europe for more regular first team football – the latest being Wales’ Rabbi Matondo, who joined Shalke from Manchester City for £10m – Lawrence believes progression via the continent is going to become more commonplace.

“The more who go and do well, the more it encourages other players to take that step as well.

“It’s a huge unknown for a lot of people and they don’t know what to expect, there are a lot of questions. It’s different for every single player.

“To me, moving into Europe seemed a fun idea and a new adventure, other people might prefer to stay in their comfort zone and hope to push up at their club.

“When I came to Holland, I had to learn the language obviously, so now I can speak two languages which is a huge plus.

“Now I’m starting to learn French here in Brussels. I would absolutely consider learning Welsh. I’ve had to learn the anthem and that’s done and dusted, so bring on whatever’s next!”