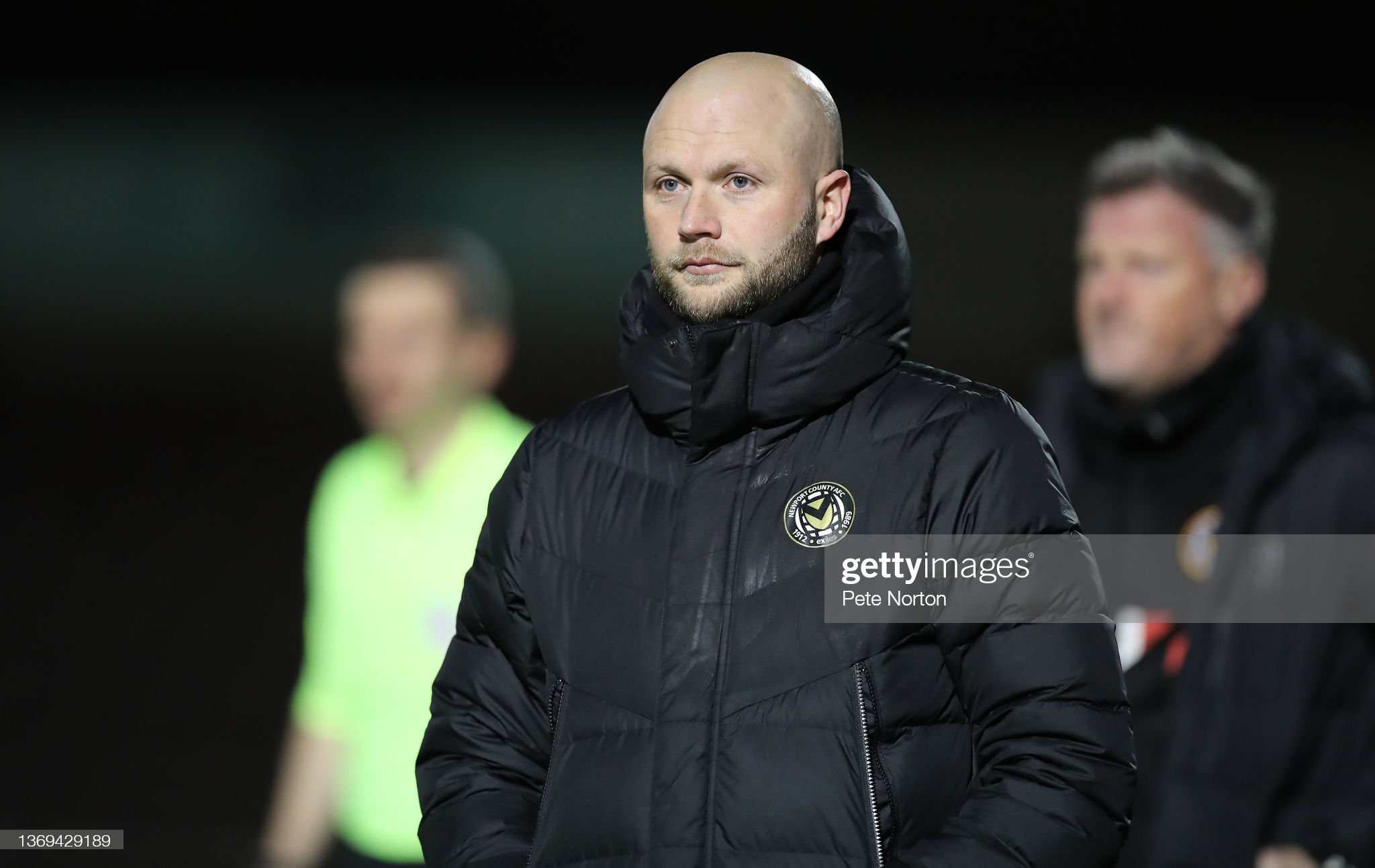 Newport County host Exeter City on Saturday in a key fixture at the top end of League Two. It’s a match that may go a long way to determining County’s fate as they chase promotion. But whether they go up, or miss out, Daniel Parker reckons the club is in good hands under shrewd young manager James Rowberry.

In the 110-year history of Newport County there have been a plethora of unhappy days.

May 31, 2021 was a million miles from the worst, but it still hurt for those with amber blood in their veins.

County had lost a play-off final in extra time for the second time in three years, and this defeat – a 1-0 reverse to Morecambe – was a particularly bitter pill to swallow.

Aside from some decidedly dodgy refereeing decisions which marred the afternoon, the loss had the distinctive feel of an end to an era of progression.

Fears then grew that inspirational gaffer Michael Flynn would follow them.

While Flynn gamely ploughed on after that infuriating afternoon in Wembley, things were never quite the same.

We’ve got a BIG game tomorrow and that ain’t no #AprilFoolsDay joke.

An indifferent start to the new season – and the affable manager’s uncharacteristically stinging public criticisms of his squad in the press – suggested that all was not well behind the scenes.

Flynn’s exit at the start of October was sad but not unsurprising.

But how do you replace a club legend? Pillgwenlly product Flynn was universally loved and became as synonymous with Newport as his late parliamentary namesake, Paul.

Passion permeated every interview he gave and served as the driving force behind his charges delivering some of the finest days in the club’s history.

They ranged from the breathtaking ‘great escape’ in 2017 to pulsating FA Cup classics at Rodney Parade against Premier League heavyweights.

Rather than courting an experienced hand, the County board turned to Newportonian James Rowberry; a highly-rated development coach at Cardiff City and one of the youngest-ever recipients of a UEFA Pro Licence.

Technical know-how and qualifications can only take you so far in the gritty environs of League Two; a division where squad psychology – and above all else, a willingness to dig your heels into the dirt over the course of an unrelenting schedule – trumps adherence to any contrived notion of how the beautiful game should be played.

While you can achieve some success with possession-based football – as the likes of Lincoln and Cheltenham have proved previously – this is a league that rewards doggedness over freewheeling flourishes.

Seven years have passed since the league winner was the top-scoring side.

So how would Rowberry, by reputation a technician, fare in the playground of the pragmatist? Would the gamble pay off?

The evidence so far suggests that the answer is a resounding yes, with the new boss securing victories in 13 of his 25 games at the helm to date.

That has pushed County to the cusp of the League Two automatic promotion places as the tail-end of the season approaches.

Yet there’s been no dramatic revolution on or off the field. For much of the season, Rowberry kept the counsel of his predecessor’s trusted assistant Wayne Hatswell (now reunited with Flynn at Walsall), and he resisted making drastic personnel changes in January, with local Pontypool product James Waite the only permanent addition.

But Rowberry deserves great credit for re-energising the playing squad he inherited.

Aston Villa loanee Finn Azaz has grown into one of the league’s foremost flair midfielders; Nick Townsend is one of its most reliable keepers; and competition for places in key areas (notably at full-back and winger) is intense.

Been doing this gig for a long time and one of the first people I met when covering Newport County was their (very) young academy coach James Rowberry.
Wish him well, feels like this role is his destiny.
Here is an article my wife wrote about him in 2008: https://t.co/dp2r18UeQ8

Then there’s Dom Telford. The diminutive striker, a bit-part player last season, is now the division’s most electric forward, with 24 goals and a brace of League Two Player of the Month awards to his name.

In January, he also became the first County player to hit 20 goals in a Football League season since Somerton Park great John Aldridge – no mean feat.

County have also shown a willingness to mix it up and adapt to their surroundings.

There have been glimpses of showboating swagger (the 5-0 thrashing of Stevenage, four-goal hauls against Harrogate and Tranmere) as well as those all-important attritional wins which tend to define a side that is on to something.

Rowberry is now well-placed to oversee his hometown club’s return to the third tier after a 35-year absence.

The weeks ahead will be tense and tight, though. At present, only five points separate the clubs between third (the last automatic promotion berth) and tenth spot in the table.

Like Flynn before him, Rowberry exudes a winning mixture of humility and quiet confidence, and you wouldn’t bet against him leading County to promotion this year.

When I began following the club from the terraces in the bleak Conference South days of the noughties, the notion of a return to the old Third Division would have seemed stupendous.

Now, it’s almost as expected as it is craved.

Whatever happens, it feels like the club are in good hands and firmly facing the future from dugout to boardroom.