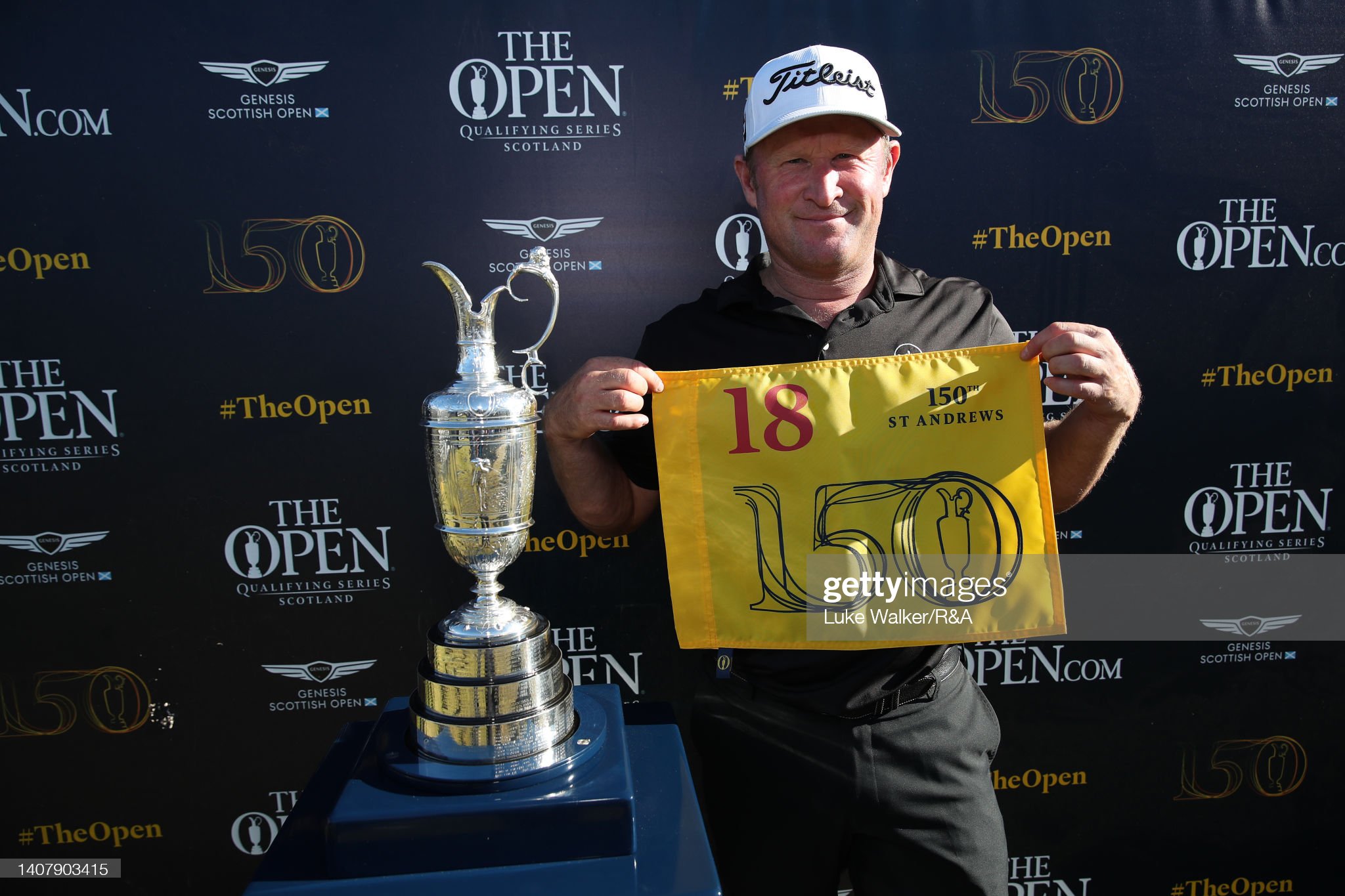 Jamie Donaldson poses with The Open pinflag after qualifying for the Open Championship. Pic: Getty Images.

Jamie Donaldson’s tie for sixth place at the Scottish Open has earned him a place at the week’s Open Championship at St. Andrews – and ruined his planned family holiday.

Donaldson – Europe’s Ryder Cup hero at Gleneagles in 201 – has qualified for the 150th Open after making three birdies in four holes from the 12th on Sunday at the Genesis Scottish Open to finish on three-under and tie for sixth place.

Donaldson, who carded a closing 67 to finish in a tie for sixth with Brandon Wu, US Open champion Matt Fitzpatrick and Cameron Tringale, said: “It’s massive, although we have booked a holiday next week so the missus won’t be happy.

“She can have a lovely holiday on her own!”

The 46-year-old from Pontypridd makes it to golf’s most historic tournament – back at it most historic course – as the top three players at the Renaissance Club in Berwick, not otherwise exempt, who finished in the top 10 gained Open qualification.

Donaldson hit 11 of 18 greens in regulation, finishing at 3 under for the tournament.

American Xander Schauffele won the Genesis Scottish Open at 7 under, with Kitayama second at 6 under and Joohyung Kim in third at 5 under.

Schauffele, who came into the week on the back of victories in the Travelers Championship and JP McManus Pro-Am, took a two-shot lead into the final round and birdied the first two holes to immediately double his advantage.

What looked like a comfortable win proved anything but, though, the world number 11 dropping three shots in the space of four holes from the sixth to fall one behind fellow American Kitayama heading into the back nine.

Kitayama’s bogey on the 17th dropped him back into a share of the lead and a closing par completed a superb 66 to set what looked a testing clubhouse target of six under par at the Renaissance Club.

However, Schauffele had regained his composure sufficiently to hole from 15 feet for birdie on the 14th and two-putt the par-five 16th for another to open up a two-shot cushion and a crucial par save on the 17th allowed the 28-year-old the luxury of a bogey on the last.

Seeing Jamie Donaldson on the Scottish Open leaderboard reminded me of his BBC interview the morning after he scored the clinching point in the 2014 Ryder Cup….BBC guy: “Has it hit you yet what you did?”…Donaldson: “I don’t know. I’m still drunk.”

“It’s an incredible feeling,” Schauffele said after a closing level-par 70 gave him a one-shot victory over Kitayama in the first event co-sanctioned by the PGA Tour and DP World Tour.

“It was a big sense of relief when that par putt went in on 17 and I could hit a couple of long irons on 18 and lag it up there.