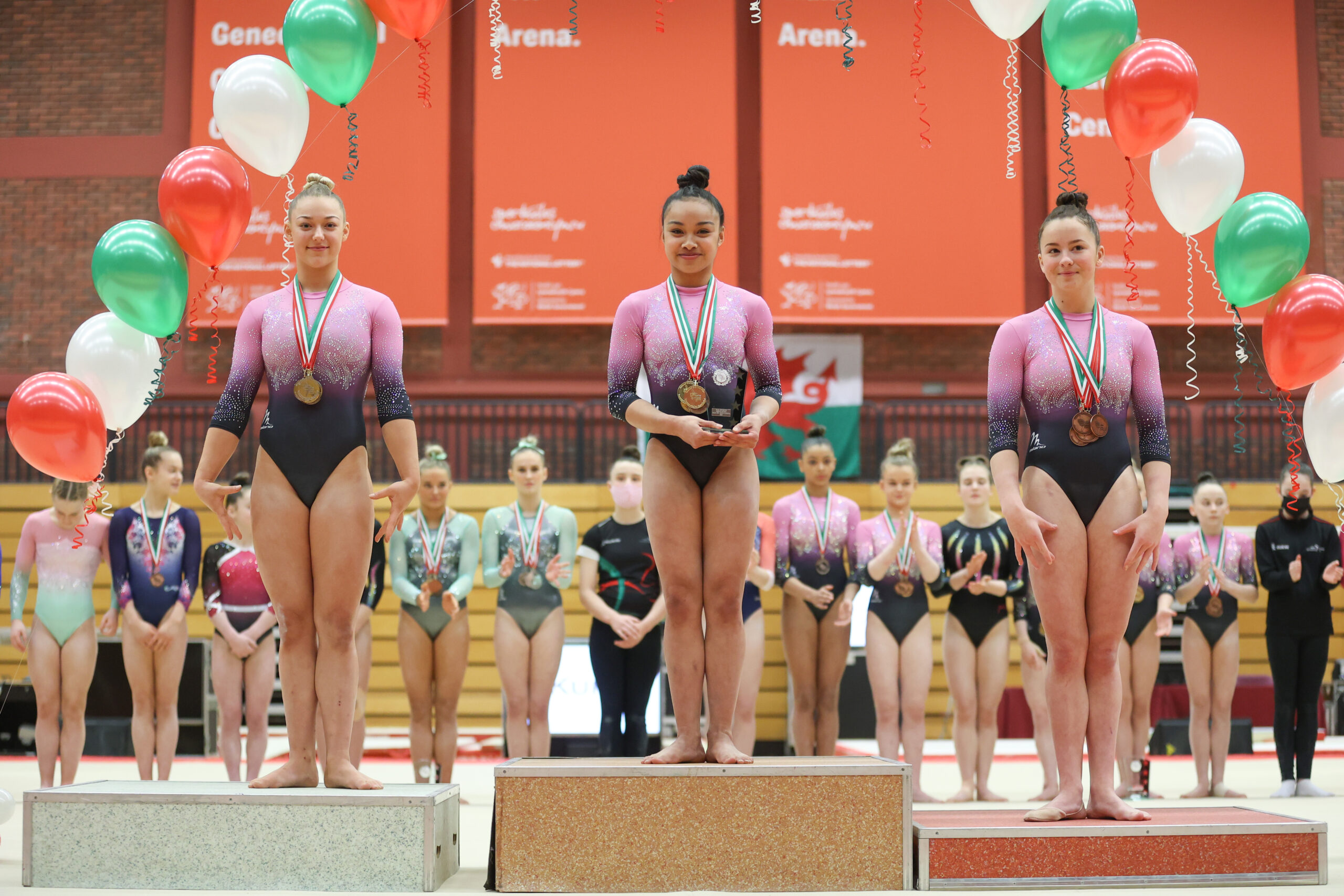 Benjamin Eyre and Jea Maracha were crowned as the new senior all-around champions at the Welsh Artistic Gymnastics Championships staged in Cardiff over the weekend.

For 23-year-old Eyre, the triumph marks his second Welsh men’s title and comes six years on from his first. He won with an all-around score of 76.636 to beat Theo-Amari Ochana (Heathrow GC) and Swansea’s Emil Barber to gold.

Maracha, who only turned 16 in January, marked her senior bow in style. Her all-around score of 48.650 across her four pieces saw her win gold in the senior women’s category from Capital Academy of Gymnastics duo Poppy Stickler and Mali Morgan, who were second and third respectively.

With exactly five months to go until the Commonwealth Games in Birmingham, the win could prove timely for both Eyre and Maracha.

For Eyre, who went to Australia four years ago, he is bidding to secure his Team Wales spot for a second successive Games this summer.

Originally from Huntingdon in Cambridgeshire, Eyre started out at the same gymnastics club as Louis Smith, one of Britain’s most decorated men’s artistic gymnasts and has trained alongside the multiple Olympic medallist.

He is studying Economics with Geography at Loughborough University and currently competes under Loughborough Students Gymnastics Club.

Eyre qualifies for Wales through his father Simon, who is originally from Pontyclun and played amateur football in the Rhondda League.

“I managed to do five out of six clean routines; it was a tough competition, and a long day, but I managed to stay focused and I’m pleased with the result.”

On how it differs from his 2016 triumph, he added: “It’s different, yeah. I think I’ve changed a lot as a person so it feels a lot different.

“I do gymnastics because I enjoy it and it’s my passion, so to get medals is great but the main thing for me is to just enjoy what I do.”

The men’s all-around competition on Saturday, however, was marred by a nasty looking eye injury sustained by Josh Cook after a freak incident on the rings – and resulted in the YMCA Barry gymnast requiring medical attention before being taken to hospital and meaning he had to sit out the rest of the competition.

It was a blow for Cook, the 2018 Welsh men’s champion, who had looked in the groove on his first three pieces of apparatus and firmly in contention to win a second title himself up to that point.

Cook, like Eyre, was also part of that Commonwealth team in Australia four years ago.

She can now look forward to her first British Championships as a senior gymnast at the M&S Bank Arena in Liverpool at the end of March.

It’s there she will be competing alongside the likes of the Gadirova twins and Alice Kinsella – who all helped secure a stunning bronze medal for Great Britain in the women’s team competition at the Olympic Games in Tokyo.

“Honestly, it just feels amazing,” said Maracha after her victory on Saturday.

“To win the Welsh title in my first year competing as a senior is just amazing – and to win those other two pieces as well – I’m just really happy, especially bars as it’s one of my favourite pieces.”

“It also feels unreal that I am competing against some amazing gymnasts and especially some who have inspired me and who I have looked up to at a young age.”

The ultimate goal for Maracha, of course, is being able to step out on to the competition floor at Arena Birmingham in five months’ time.

“Honestly, I think it would mean the world if I secured a place on the Commonwealth team,” she added.

“This is one of my biggest goals and I really hope that I can achieve this, by putting all the hard work into my training and making lots of sacrifices.”

Read our ROUND-UP from the Women’s Artistic competition that took place this morning.. ⤵️
👉 https://t.co/vGwqBMTeA9#WelshChamps2022 #B2022 #TeamWales pic.twitter.com/JGTXUssx5Z

Two other women’s artistic gymnasts vying for Commonwealth selection both enjoyed individual success on the apparatus over the weekend.

Then, on Sunday, Maracha added uneven bars gold in the women’s masters competition – which saw the top eight female gymnasts combined across all of the age groups battle it out for medals on all four pieces of apparatus.

Eyre followed up on his all-around victory with two more golds, on the rings and high bar.

Barber retained his floor and vault titles from 2019, while Jacob Edwards (Olympus) bagged gold medals on pommel and parallel bars – where he edged out 2016 Olympian Brinn Bevan, who was himself looking to retain the title he won on that apparatus on his way to the all-around Welsh title in 2019 – the last time the Welsh Artistic Championships were held.

Bevan (South Essex GC) is also the reigning British and Northern European champion on parallel bars, but he had to settle for silver this time as he works his way back after recovering from Covid-19 recently.

There was also the welcome sight of Cook back in attendance and in good spirits supporting his Wales team mates following his injury the day before.

They had also had the support of Joe Cemlyn-Jones who was also in attendance on Saturday.

A hand injury forced Cemlyn-Jones (City of Birmingham GC) to sit out this event but he is set to return to action at the English Championships in Redbridge from 11-13 March, where he will compete as a guest, ahead of the British Championships a fortnight later.

Cemlyn-Jones enjoyed plenty of success in 2021 where his standout achievements included finishing second in the all-around at the British Championships, which helped earn him Great Britain selection for the World Championships in Japan.

He ended last year with the all-around title at the Northern Europeans and led the Wales men to glory in the team competition.