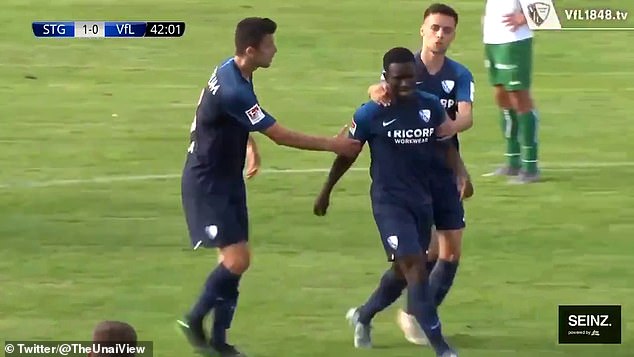 Jordi Osei-Tutu left the field after being target of racist abuse before returning.

JORDI Osei-Tutu was a target for sickening racist abuse in European football, but the Arsenal man – who will spend this season on loan at Cardiff City – says it has made him stronger on and off the pitch.

And now the 21-year-old hopes his experiences abroad and a strong stint in the Welsh capital can help him follow close friends Eddie Nketiah and Bukayo Saka into the Gunners’ first team.

Osei-Tutu spent last season on loan at German second division side BfL Bochum, but his brave decision to test himself in foreign climes started in nightmare fashion.

The defender was racially abused by an opponent in his first game for Bochum – a pre-season friendly with Swiss club St. Gallen. The St. Gallen player denied the claim against him.

Osei-Tutu initially left the field before returning and he went on to make 22 appearances in what was his first full campaign at senior level. He also scored five goals. The defender’s decision to join Championship side Cardiff this summer came on the advice of Arsenal boss Mikel Arteta.

“At the time it was difficult to handle,” Osei-Tutu said of being a target for racism. “I’m not thankful I went through it, but I’m grateful in a way as it helped open my eyes a lot.

“It showed me how to react to certain things and now I think I’ve always got something to prove. I wouldn’t wish it on anyone, but I’ve always classed myself as a strong and resilient character.

“My dad Emmanuel helped me a lot with that. He is old school. He came to London from Ghana when he was my age and racism was a lot worse then. He’s told me stories about the past and it made me realise that what happened to me was nothing compared to what he went through.

“It motivated me. He tells me don’t let comments get you down and to use them to your advantage to prove people wrong.

“I think I’ve got my mentality from him. I’m always up for a challenge. You would think racist abuse wouldn’t be going on in 2020. It happened to me in 2019, but it is a part of life and you have to learn how to deal with it. You have to take a negative and turn it into a positive and it’s been nice to see not just the football community, but the whole world come together and try to put an end to racism.

“I just hope it continues.”

Osei-Tutu played in the same Arsenal Under-23 side as Nketiah, Saka, Joe Willock and Reiss Nelson. He has watched from afar as all four have played Premier League football.

“It was really difficult moving to a different country and learning a new language. It was a big decision. Everything was different in Germany,” Osei-Tutu added.

“It helped me mature on and off the pitch. I was living by myself and cooking and cleaning. I found a side to myself I didn’t know I had. It changed me as a person and as a footballer.

“I’m very thankful for the experience and I’ve always been independent. In football you have to make sacrifices and go outside your comfort zone.

“It’s always been my dream to play for Arsenal’s first team at the Emirates as a right back. It’s the dream I am chasing and will work hard to achieve.

“Mikel said to me I have to work hard and that he’ll be watching. It’s been really nice to see the manager put trust in the club’s young players. It makes me want to work even more.”

Neil Harris’ Cardiff suffered Championship play-off heartbreak last season and their preparations for the new campaign have been in turmoil after winger Nathaniel Mendez-Laing was sacked for a breach of contract. Osei-Tutu is set for a regular run of games with the Bluebirds, starting at home to Sheffield Wednesday today (September 12).

“I had other offers, but as soon as I heard Cardiff were interested getting a move here was the main thing on mine and my family’s mind. It’s a big club – a Premier League club for me,” he said.

“When I spoke to the manager I liked his ambition. That’s what made me come here.”