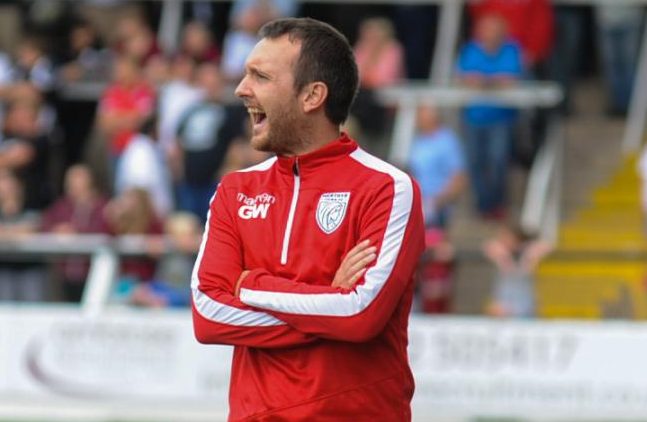 Merthyr Tydfil-born Williams is training hard with his home-town club and has stepped back from his first team managerial role.

Dean Clarke, who has been Williams’ assistant over the last four seasons, has reversed roles with Williams.

A club statement said: “A decision has been made that Gavin will supplement the playing squad for a short period.

“During  his temporary absence from the touchline Dean Clarke will act in a caretaker capacity with Ashley Thomas providing his assistance before Gavin returns to the technical area when this short-term issue has been resolved.”

“Dean is officially first team manager for now, while Gavin is happy to be player/assistant manager at this stage. They are still working side-by-side for Merthyr Town.”

Williams, who earned two senior Wales caps, has made occasional appearances for the Martyrs over recent seasons and is keen to play again at the age of 40.

His cultured, attacking style can be a major benefit for Southern League Premier club Merthyr and his passing ability in central midfield will be a genuine asset.

Clarke’s aggressive, all-action, highly competitive approach to midfield play made him popular with supporters and when he retired, then Merthyr Town player-manager Garry Shephard said: “Dean has been a fantastic servant to the club.

“He never shirked a challenge and put his body on the line game after game, which is why the fans love him.”

Hereford-born Clarke, now aged 43, is facing tough conditions in his new role because Merthyr Town have been unable to play pre-season fixtures so far because of Coronavirus restrictions.

That is frustrating for Merthyr, who have had to call off several friendlies because the Welsh Government have not given the go-ahead for pre-season fixtures. They have, though, said yes to the Southern League season starting later this month.

A club statement said: “The frustration of losing so many players during the summer and the need to virtually rebuild the side caused enough problems.

“Those factors  compounded by being prevented from playing any pre-season friendlies. This will inevitably lead to a general shortage of match fitness.”

The Martyrs have also been rocked by the loss of club captain. Adam Davies, who has suffered a serious injury in training.

“In regards to our pre-season so far, the boys are looking sharp and that’s always a positive, especially with limitations to play friendlies,” says Clarke.

“Those returning from last season have come back stronger and hungrier which is great to see.

“We have added in the right areas, and are still looking to add a couple more signings before the season gets going. I feel it’s important that we make the right signings, though, and ensure that both the club and the player are suited.”

Clarke is working closely with the football club and Davies on the best route for his recovery after he had to be carried off the Penydarren Park having suffered a ruptured Achilles tendon.

Merthyr Town are also working to raise funds to help pay for the operation.

“Adam will continue to be our official club captain,” says manager Clarke. “However Ismail Yakubu will become our matchday captain for 2020-21 fixtures with Lewis Binns the new vice-captain.

“Everybody at the football club wishes Adam a safe and speedy recovery.”

Merthyr Town have also seen Eliot Richards leave South Wales to sign for National League Barnet and Clarke said: “Myself and everybody at the club thank Eliot for his commitment and service over his two spells with us and we wish Eliot all the very best in his next adventure.”

Molyneux, 20, is predominantly a centre-half, but can play anywhere across the back four or in a defensive midfield role.

“I’m delighted to welcome Dion,” says Clarke. “He is a strong, athletic player who is a great addition.”

The Martyrs begin their new Southern League season with a home game against Beaconsfield Town at the MetCoaches Stadium on Saturday, September 26 before a trip to manager Steve Claridge’s Salisbury the following Tuesday.

Over the festive period, Gavin Williams’ side will travel to Yate Town on Boxing Day, Before hosting Swindon Supermarine on New Years Day.