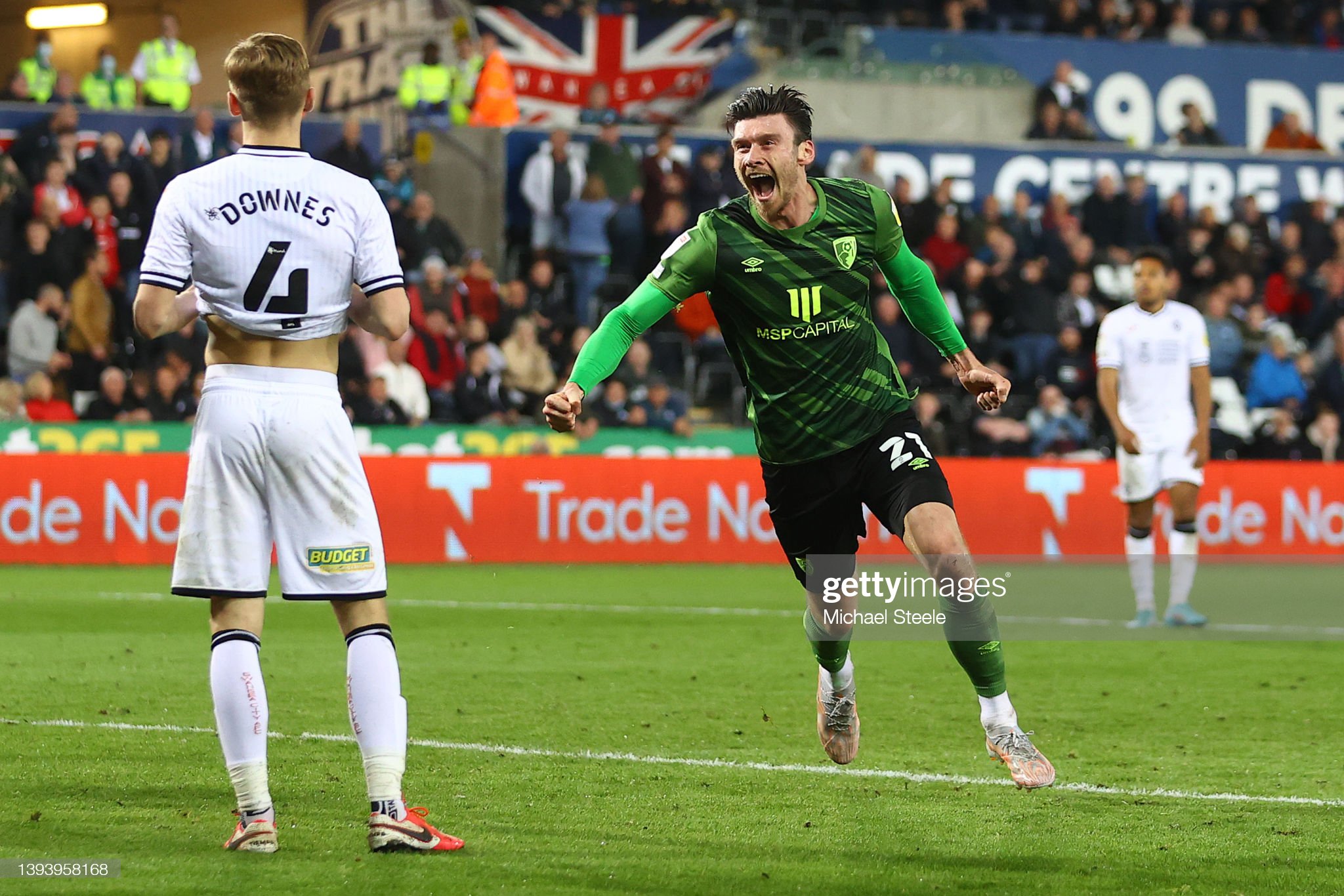 The former Cardiff City forward scored two goals to inspire Bournemouth to a 3-3 comeback draw against the Swans on Tuesday night.

Moore, who came on as a substitute following 10 weeks out for a broken foot, scored his team’s first goal of the match and then followed it up with a 90th minute equaliser as they recovered from 3-0 down to make it 3-3.

But Martin has accused Moore of elbowing Downes in the 73rd minute and insisted: “He should have been sent off.

“I wouldn’t suggest it was sinister. It was probably careless. I don’t like moaning about refereeing decisions, but he’s elbowed Flynn.”

Bournemouth’s manager, Scott Parker, disputed Martin’s claim about the incident which came just before Dominic Solanke scored from the penalty spot to make it 3-2.

Swansea had earlier stormed into a three-goal lead just before the hour-mark, after two glorious strikes from the in-form Joel Piroe in the opening 12 minutes and a 58th minute counter-attacking effort from Cyrus Christie.

Speaking about the incident with Moore and Downes, Parker said: “I think it’s a bit harsh”.

“It didn’t register with me. I am not going to comment on that to be honest.”

Parker felt his team had shown more legitimate resistance in coming from three goals down with only 18 minutes of normal time remaining.

The comeback leaves them three points ahead of third-place resurgent Nottingham Forest, with the two clubs due to meet in a vital match on the south coast next Tuesday.

“Immense spirit, desire, passion – all the words you commonly hear coaches say they want in their team, we showed them in abundance,” added Parker.

10 weeks off, but fair to say Kieffer Moore looks in decent nick. Massive World Cup plus for Wales heading into June.

“At 3-0, you probably think, ‘take your medicine and re-group’, but I am very proud of the team. That was massive for us. Kieffer Moore was unplayable.”

Piroe’s goals took him to 24 for the season, but Swansea’s capitulation was the second time in eight days they had surrendered a three-goal lead, following a 4-4 draw at Reading.

Martin was pleased with his side’s first hour of play but will rue the late mistakes which allowed Bournemouth to snatch a point at the death.

“I’m really proud of the players. For 50 or 55 minutes, I thought they were brilliant. So brave, they caused all sorts of problems for Bournemouth in the first-half in particular,” he said.

“They had moments in the first-half, but you expect that with the squad they have.

“I have nothing but praise for the players for how they were. We get the third goal, they make changes.

Regardless if Moore should’ve had a red card, we shouldn’t be blowing three goal leads in the second half twice in eight days. To not have a centre back on the bench at all I thought was odd but hopefully we can recruit well in the summer so we can see these leads out in future.

“Ben Cabango coming off is a massive moment for us. We had probably the smallest back three playing against the biggest front three players. They take our most dominant player out aerially, and then it’s some key moments really.”

With Swansea 3-0 up, Bournemouth manager Scott Parker decided to roll the dice and bring on 6ft 5in Moore. The Cherries had opted to switch to route one football, targeting Swansea’s lack of aerial ability at the back.

Cabango was a big loss for the home side, but initially, the change of personnel meant that Korey Smith slotted in at right-back seamlessly. When he was moved to the midfield however, Martin’s tactical changes meant that Christie found himself moved from his right-wing position to right-back, which ultimately caused the home team issues.

With no pressure at the back, Parker instructed his players to attack the wide channels. Christie struggled to produce the same energy after a breathless opening 60 minutes of pressing, and Manning was under pressure with an overload on the left-hand side.

The Cherries were able to bypass Swansea’s midfield in transition, winning the ball back in their mid-block. They attacked the wide channels to get good quality crosses into Moore and Solanke.

It was only a matter of time until Bournemouth got on the scoreboard, with the Swans retreating deeper into their own box. Martin had abandoned his successful high press tactic, which allowed Bournemouth to send wave after wave of attack unopposed.

Parker had masterminded the comeback and it was now on his players to show their desire to prove they had the fight worthy of Premier League Promotion.

“Bournemouth threw everything at it, they just risked it all. When we did have the chance to play, the detail wasn’t quite there,” said Martin.

“The third goal, it’s a push on Flynn. These are just clear decisions. We should win the game at 3-0 up. But it’s a different feeling to Reading, it’s not a mentality problem, we’re playing a team who are where they are in the league, fighting for everything.”