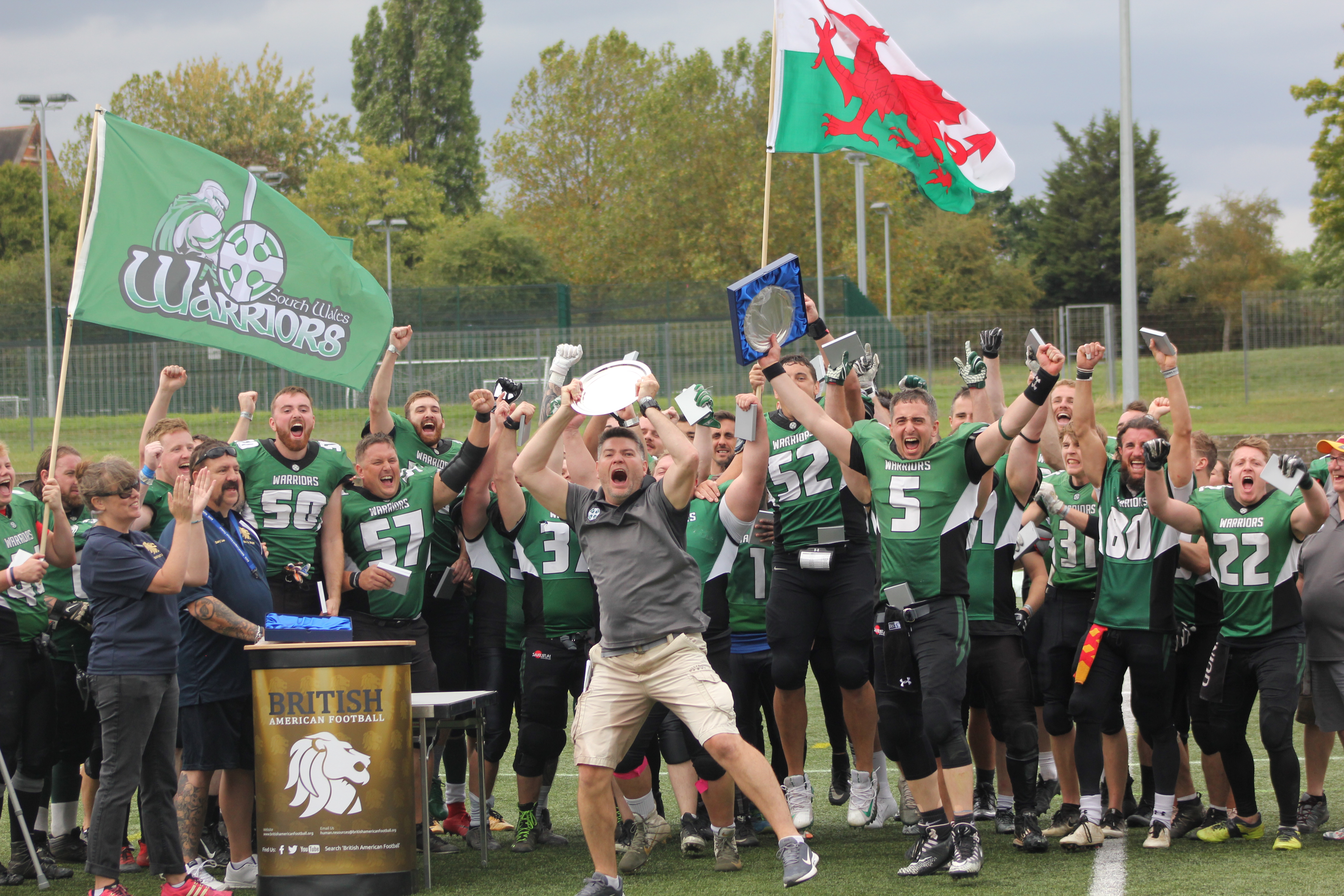 The Warriors celebrate their trophy triumph.

Two touchdowns at either end of the game have won the South Wales Warriors the Division Two South Britbowl XXXIII title.

The championship completes a remarkable turnaround for Wales’ only senior American Football team who just two years ago endured relegation and a winless season after voluntarily giving up their place in the top tier Premiership.

Last year, the Warriors’ first back in the basement division since 2011 when they also won the Britbowl, saw heartache at the semi-final stage.

But the Llanharan-based club has now secured its aim of promotion back to Division One and added the southern conference title by downing a determined Bournemouth Bobcats 13-0 at the New River Stadium on North London’s White Hart Lane.

“Bournemouth pushed us all the way and it wasn’t comfortable at all during the game,” said Warriors head coach Geraint Roberts after enthusiastic celebrations at the final whistle.

“With a one score lead it would only have taken one broken play.”

Full time was greeted by a rendition of Bread of Heaven from the Warriors supporters who made their vocal presence felt among a larger travelling contingent from Bournemouth.

The Warriors had a near perfect start when their mean defence forced the Bobcats’ first possession to end after gaining just one first down from a penalty.

It looked as if the Warriors’ opening drive would also stall after failing to convert a third and five. But when Bobcat Will Brooks ran into punter Mick Duncan it was enough to give the Welshmen a first down.

The Warriors, who had tried to surprise the Bobcats by passing on their first play, but without success, then trusted their usual approach of handing the ball to powerful running back Josh Hughes who rumbled through the middle of the field for 22 yards with Bobcats bouncing off him.

Quarterback Dean Jackson then found his rhythm connecting with receivers Michael Hiles and Duncan to move within just four yards from the Bobcats end zone. It then took Hughes two carries to cross for the opening touchdown, from a yard out, which was converted by Duncan.

Despite the early score it would be defences that dominated the game although both offences showed flashes of how dangerous they could be without ever finding that crucial scoring play.

Before the Warriors added their second touchdown it was the Bobcats who had come closest to scoring and, indeed, many of their fans in grandstand thought they had in the third quarter.

An unnecessary roughness penalty, after Warriors safety pushed a Bobcat receiver, after he’d dropped the ball, moved the Bobcats to the Warriors red zone with a first down at the 15 yard line.

Receiver Carl Phillips hauled in a MacDonald bomb over his right shoulder, at the back of the end zone, but the sideline official ruled the catch hadn’t been completed while the receiver was still in the end zone.

The Bobcats tried the very same play again but MacDonald’s pass was fired way too deep and a 31 yard field goal attempt was then blocked.

The next score wouldn’t come until late in the fourth quarter when the Warriors’ slender lead had began to look vulnerable – no less so than when stand out Bobcat safety Tom Burn intercepted Jackson at his own 10-yard-line kept his balance on his tip toes to remain infield and charged down the sideline.

He was eventually brought down at midfield but a block in the back penalty meant the Bobcats would take possession at their own 30-yard-line.

The Warriors defence gave up two first downs as the Bobcats chased the one score lead and advanced to midfield. But they were unable to overcome a five yard false start penalty and on third down defensive end Akeem Hallisey sacked Bobcat QB Craig MacDonald whose left arm always looked capable of causing damage to the Warriors.

Following the punt Jackson directed the Warriors downfield, showing a clean pair of heels to the Bobcat defence to convert a crucial third and eight, and finding Jason Roberts on third down, but two yards short of the line to gain, immediately after the receiver had dropped a second down pass that would have secured a first down in the red zone.

On fourth and two Jackson bootlegged to running back Daniel Abbruzzese and swept right to keep the drive alive.

A 10-yard run from Abbruzzese was then wiped out by a holding penalty and a further penalty saw the Warriors facing what looked like third and a mile for a first down.

But the veteran QB connected with the speedy CJ Caparas down the left hand sideline and he was pushed out at the four yard line when it appeared he may have scored.

On second and goal Jackson looked to Roberts again, who had looped to the outside left, and once he collected the ball the 25-year-old, who also plays for the Cardiff University Cobras, crossed to score with only around three minutes remaining in the game.

The Warriors tried to add two points by having kicker Duncan pass the ball but he was swallowed up by the Bobcats rushers and the score went unconverted.

Roberts revealed afterwards he had suggested the scoring play to Jackson: “It’s something we run through a lot in training.

“There was a little bit of a delay before Dean got the play out and I said why don’t we run that play? Dean agreed.”

Roberts also said he didn’t let his early dropped catch worry him: “It’s frustrating but we said before to trust our process and a ‘next time mentality’. We had some big plays go against us but the boys make sure we get it back the next play.”

Jackson, from Newport, who was named the game’s Most Valuable Player by organisers, said the approach of taking chances and not agonising over mistakes had paid off: “I’m a bit of a gunslinger so if I see an opportunity I throw it. It’s 50/50 and it can go either way, it might be picked off or it might be a big play. But having a defence like ours helps.

“The touchdown pass was Jason’s idea, he came back he said can we run it, I said go for it.”

Head coach Roberts paid tribute to his team’s determination: “The defence, as usual, was outstanding and the offence had a really good game against a great Bobcat defence.

“Dean was outstanding keeping drives alive, taking all the pressure on his shoulders and making big plays.

“For the team to come back after the disappointment last year and to win it this year and come back fighting is testament to the coaches and the players.”