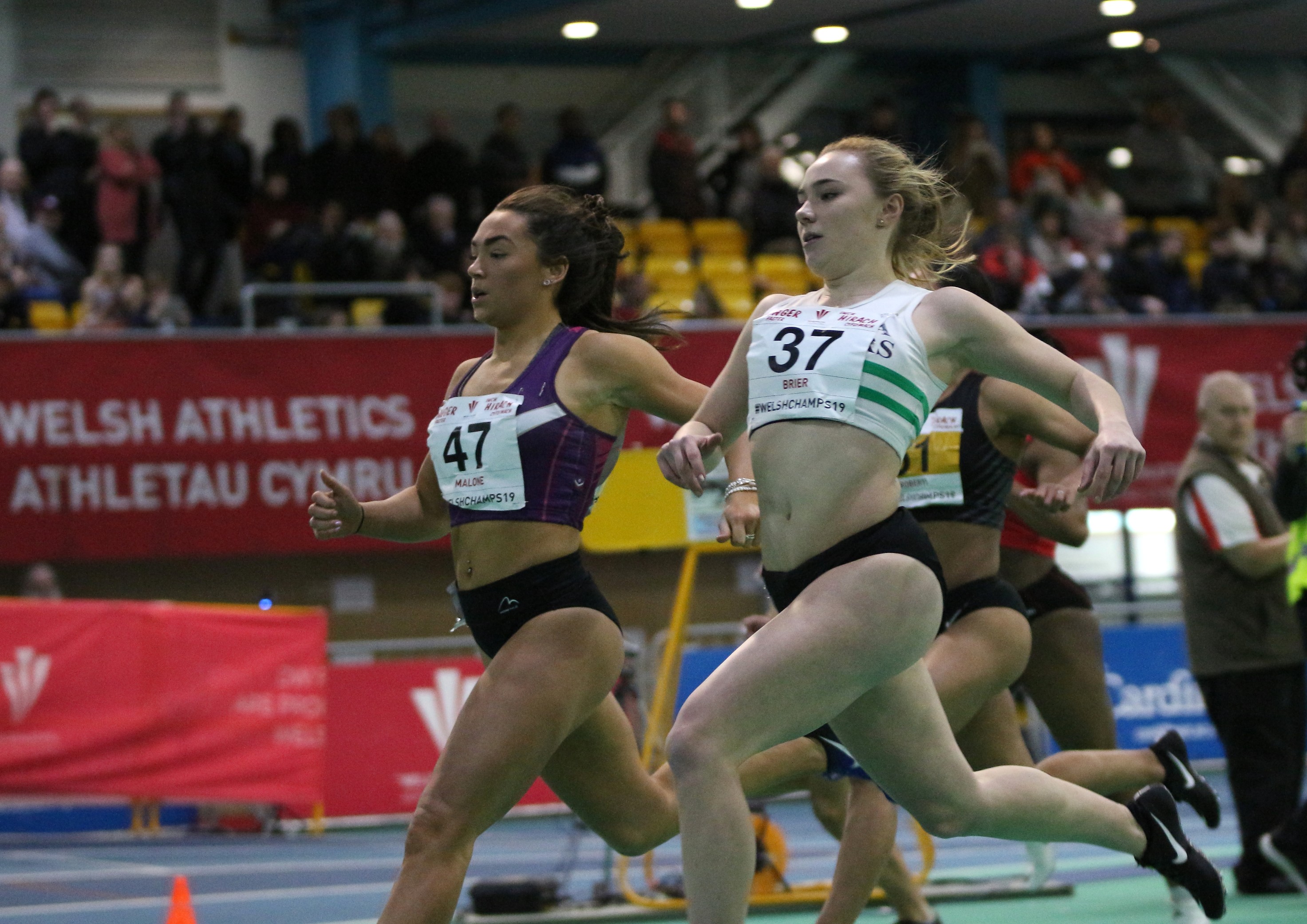 The much-anticipated women’s 60m final lived up to its pre-race billing as Shannon Malone beat Wales Commonwealth Games sprinters Hannah Brier, of Swansea Harriers and Birchfield Harrier Mica Moore to claim the gold in another personal best time of 7.45.

For a while it looked as if training partners Malone and Brier wouldn’t be separated as officials pored over the photo finish following in desperately close finish.

The training partners stood together as they awaited the official result. Eventually, the Loughborough Students AC athlete was given the nod by the narrowest of margins – thousandths of a second.

A delighted Malone said of the race: ” It was really, really close. Neither of us knew until about 10 minutes after the race who got it.

“I’m over the moon to get a PB more than anything, but obviously to take the win is an added bonus.

“We both train at Loughborough together so it’s quite good because we have that competitive element when we train that a lot of people don’t have. It was a bit tense waiting, but I was just happy with whatever the result was because of the time.”

In the equally eagerly awaited men’s 60m final, two of the big pre-race favourites – Ben Gordon and Jeremiah Azu – were disqualified as Arron Owen claimed the Welsh title in a personal best time of 6.87.

With Cardiff’s International Indoor Arena crackling with nervous tension, the headline race eventually got underway at the third time of asking and it was Owen who held his nerve to claim gold.

The Cardiff AAC athlete said afterwards: “I’m happy with the PB, it just came under strange circumstances. People weren’t happy with stuff at the start, but it is what it is. It’s just executing and getting it done.

“But the two people who were DQ’d are both very good runners, so it’s disappointing because I would have liked to run against them as well.

“I’m happy that I came out of it and tried to stay calm amongst everything that was going on because you have to adapt to the situation. But I’m happy with the performance in the end, getting a PB and moving on to the next race now.”

Like the women’s 60m, there was another close finish in the women’s high jump, but this time the top two athletes couldn’t be separated.

In the first track final of the day decathlete Harry Hillman clocked a new personal best of 8.42 seconds as he finished ahead of Fyn Corcoran of Rhymney Valley AC.

The Cardiff AAC man said afterwards: ” I’ve been working on a few things this week and it was really great to put them into practice. It was a big PB and a British champs qualifier. I’m only a decathlete, so to do that, I’m really happy.

“As a decathlete it’s about outdoors for us. So indoors is a good chance to see where we are – a good opportunity to get some practice in.

“I’ve been really working on my arms over the hurdles and I put that into practice today. It still wasn’t a clean race but I’m racing again on Wednesday so I can go out to try and run faster and get myself in there with the big boys at the British Champs in two weeks.”

In the field events Ceiron Hopkins retained his Welsh long jump title with a winning leap of 7.21m to finish ahead of Wrexham AC’s Thomas Walley and Cardiff Archer Daniel Murathodzic.

The Neath Harrier was delighted to claim the win after suffering from a series of niggling injuries. “I just wanted to come out and execute the jump really well.

” I’m injury free for once so I’m pleased with how it went. It’s been two long seasons where I’ve had problems with my hips and adductor, but I’ve been working with the physio and it seems to have got much better than it was.

Another athlete to retain their indoor title was Laura Turley, of West Cheshire Athletic Club, who produced a hugely impressive performance to win the 400m in 55.94 ahead of Ffion Mair Roberts, of Colwyn Bay.

Swansea Harrier Ben Paris also emulated the feat as he stormed to the 200m Welsh title once again in a time of 22.10.
Cardiff AC’s Kate Seary produced an equally emphatic win in the women’s 1500m where she stormed to victory in 4:31.00 ahead of clubmate Anwen Gammon.

The men’s 1500m final saw Newport’s Remi Adebiyi produce a determined run and a personal best to claim gold in 3:57.92, ahead of Pembrokeshire Harrier Matthew Williams.

A full list of results from the two day competition can be found of the Welsh Athletics website.