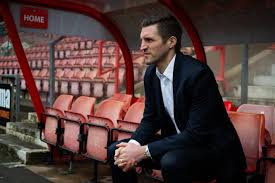 Sam Ricketts is intent on securing a major prize for Wrexham in the new Vanarama National League season.

The former Welsh international believes the Dragons are among six or seven clubs capable of securing automatic promotion and says: “That has to be our aim. There is no other reason you come to work every day.”

Wrexham are keen to join Newport County in the Football League and Ricketts has signed eight new players in his quest to deliver the dream.

“We’re trying to change the dynamics a bit with pace, power and youthful energy coming into the side and new ideas,” says Ricketts.

“Everybody needs to feel pressure for their places. I think that’s what pushes all players.

“We are a healthy squad size going into the season.

“There are plenty of options to keep players fresh, cover for injuries and suspensions.

“It’s not going to be easy and there are probably five or six other clubs saying exactly the same thing.”

Wrexham, relegated from the Football League in 2008, start their National League season against Kent club Dover Athletic at Crabble Top on Saturday and Ricketts has accepted the challenge in his first managerial role.

The North Walians finished 10th last season, four points outside the play-off positions. They earned only seven points from a possible 27 following the departure of manager Dean Keates to Walsall.

Ricketts brought in his eighth signing of the summer with the arrival of Brighton loanee Jordan Maguire-Drew.

“The start of our season is full on, a hectic start involving two matches a week,” he says.

Dover have not lost in their last eight matches against Wrexham, winning four and drawing four.

“Wrexham are one of the massive clubs who have been in the Football League and probably feel they have been at this level for too long.

“They have bought a new manger in and invested in a lot of players in the summer.

“They are competitive every season and will want to go one better this time, but so do we and we won’t be any less inspired to do well.”

One of the biggest battles will be in goal where new signing Rob Lainton goes head-to-head with Christian Dibble, the son of former Wales and Cardiff City player Andy.