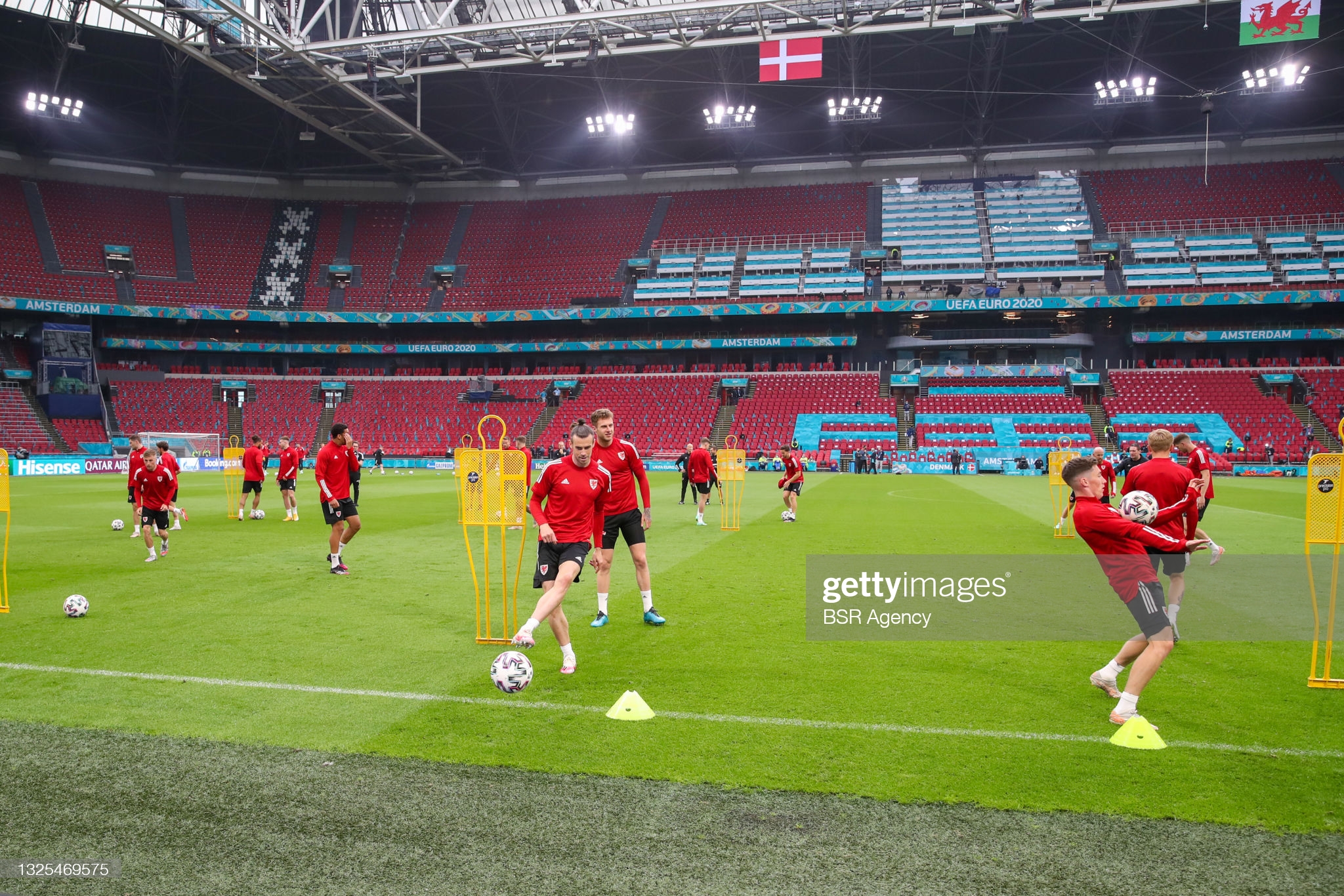 Former Wales manager Mark Hughes has backed his old team to withstand the wave of emotion carrying opponents Denmark into their Euro 2020 knockout clash on Saturday.

Hughes believes the Danes have become everyone’s second favourite team because of the outpouring of sympathy since the cardiac arrest suffered by their star and talisman, Christian Eriksen.

But the manager who took Wales to the brink of qualification for Euro 2004, reckons Wales have both the spirit and match-winning players to pull through in Amsterdam, in a game which is live on S4C.

“These are two very evenly matched teams, says Hughes. “It’s a difficult result to call, but I really believe that if Wales play well, they can win.”

Hughes admits Wales will have two distinct hurdles to overcome when they run out at the Johan Cruyff Arena in the Netherlands.

Firstly, there are likely to be no more than a handful of Welsh fans present – those who happen to already be living in the host country – because of travel restrictions imposed by the Dutch government over Covid fears.

Secondly, says Hughes, the Danes have been pulled tighter as a group in response to the Eriksen drama and the fact it was played out on live TV in their opening game against Finland has garnered widespread sympathy.

“Clearly, Denmark have captured everyone’s imagination and hearts with the circumstances around the health of Christian Eriksen,” says Hughes.

“You sense that everyone has acquired Denmark as their second favourite team in this tournament, which is a status maybe Wales had in the last tournament.

“So, this emotional wave will be there and it carried Denmark through their match against Russia.

“Also, there are going to be Danish fans there, but none from Wales, which is an advantage for them.

“It’s a real shame and a loss to the tournament. We all know the reasons why it’s not possible for Wales fans to travel there – the Netherlands are just not allowing Welsh fans in.

“But then again, it was the same situation very much for the game against Turkey in Baku. Very few fans got to Baku and Wales were up against it in terms of support.

“But we dealt with it before and we’ll deal with it again. Wales have faced things like that before and come through. They can do it again.

“For players, you take that label of being the most-liked team. But when the game actually starts it’s about performing on the day and producing the goods.”

The Danes produced an energized and emotional display in their last match to beat Russia 4-1 in Copenhagen and clinch their place in the last 16 as runners-up in Group B.

In contrast, Wales suffered their first defeat at the tournament as they lost their final group game, 1-0, to Italy in Rome after Ethan Ampadu was given a straight red card with almost half an hour to go.

“I still think we are in a good place and we have momentum, even though we lost the last match.

“It didn’t damage our confidence because I felt we played well in the circumstances against a very strong Italian team. I fully expect another good performance.

“Make no bones about, though, we are up against a very good team. Denmark have some individual talent and what they have been through together as a group – emotionally and mentally – will have brought them closer together.

“But Wales are playing well and they have match-winners which is always key in this tournament.

“Even if they are not playing well, they have individuals who can produce one moment that can determine the outcome.”

One of those match-winners is Cardiff City striker Kieffer Moore, who Hughes insists will be restored to the front line after starting on the bench against the Italians.

Wales v Denmark in the Last 16 tomorrow; and we are all like this… pic.twitter.com/ajevOUYk4r

“Rob Page protected Keiffer Moore because of the possible suspension. I think he’ll bring him back because we look more effective with a focal point at the top end of the field.

“The rest of the team has become quite settled and that’s a tribute to Rob and his selection policy. It looks a settled side.

“It would be a tough ask to match the achievement of making the semi-finals in 2016, but given that we were in a tough group against good teams, we have done well already.

“The expectation was never to go that far deep into the tournament, but we are in a good place and momentum is huge. It can take you to places people didn’t think this group would get to.

“The sum of the parts is bigger than they appear with this Wales team and they take you to places people don’t expect.

“We are enjoying the journey. We seem to excel in this tournament and the whole country comes together.”

Join the S4C team at the Johan Cruyff Arena for live coverage of UEFA EURO 2020 Round of 16 match between Wales and Denmark.