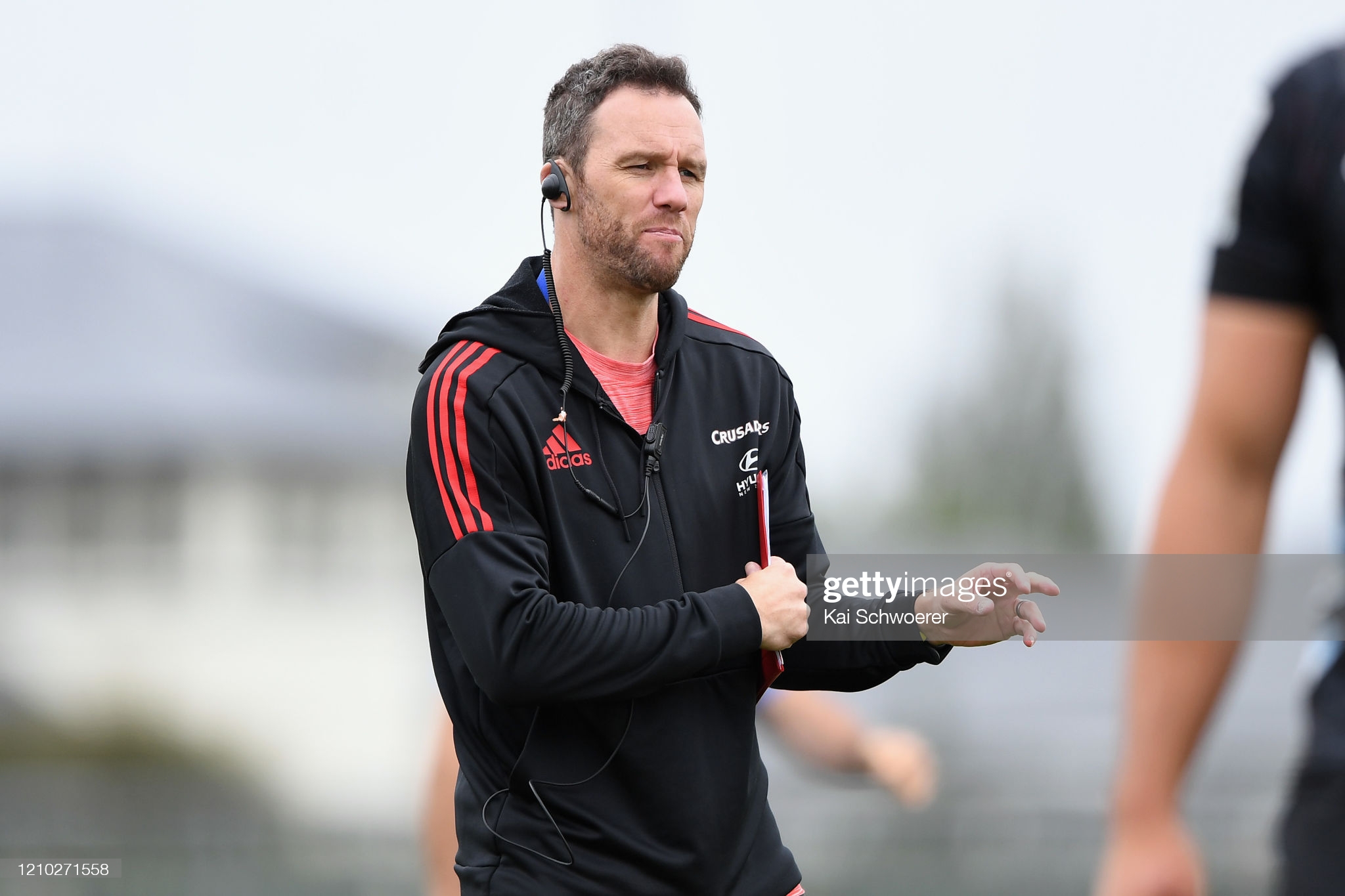 Mark Jones during his time with the Crusaders. Pic: Getty Images.

Mark Jones has moved a lot closer to home and insists one day he wants to return to Welsh rugby.

The new assistant coach at Worcester Warriors had been working in New Zealand with the all-conquering Crusaders, but even the best non-Test team in the world had to give way to coronavirus.

Having made it back from Canterbury in December for a Christmas break, the pandemic and its effect on flights and transglobal workers meant the Jones family were unable to resume their new life in the southern hemisphere.

But the closing of a door in New Zealand, has meant the opening of another just across the border at Sixways.

Jones, like his former team-mates Dwayne Peel and Jonathan Thomas, is one of a number of promising young Welsh coaches coming through the ranks.

Jones and Thomas will team up at Worcester while Peel is returning to Wales with Cardiff Blues for next season.

On the whole though, Wales’ four regions have shunned their own when it comes to head coaching roles.

“There is a lot of potential in Welsh rugby and sometime in the future I’d like the chance to come back and give something back,” said Jones. “I always think it’s good to have people from your own nation coaching their players as you have somebody that understands the players and the background of the country. It connects well with supporters.

“I like the idea of having some diversity from the outside as we saw with Warren Gatland and Graham Henry. It’s about having the right balance.

“The Welsh coaches are out there so it’s about making sure we get everything in place around them to ensure they succeed. Everything is so well aligned in New Zealand.

“It really is a top-down approach. The franchises play similarly, they’ve got nuances which are different, but they are very well aligned in how they want New Zealand sides to play.

“That’s why New Zealand are so successful. Things are not quite as well aligned over here.”

With many of his possessions still in New Zealand and a new coaching chapter with Worcester now underway, it’s fair to say it has been a whirlwind few months for Jones.

The former Wales wing uprooted his family a year ago and just months after ending his time in charge of Welsh Premiership side RGC 1404, he suddenly found himself coaching at the then Super Rugby champions Crusaders in Canterbury.

It was a remarkable move. At RGC in north Wales the majority of Jones’ players were amateur. At the Crusaders, he was working with All Blacks stars Sam Whitelock and Richie Mo’unga.

The contrast couldn’t have been vaster, but Jones thrived with maverick Crusaders Scott Robertson as his boss and the pair delivered a Super Rugby Aotearoa title for their team in August.

Unsurprisingly, Jones was keen to extend his stay in New Zealand, but the cruelties of Covid-19 have not allowed him to return. Still, he has fallen on his feet with a first job in the Gallagher Premiership.

“We came back from New Zealand at the beginning of December as we’d made the decision to spend Christmas with the family because we hadn’t seen anyone for a year or so,” Jones said.

“We tried to get all our ducks in line with going back out. We got everything sorted, but between when we left and tried to book flights back, the landscape changed dramatically around the quarantine situation. Everybody who goes into New Zealand has to go into quarantine for two weeks. Unfortunately, there were no slots available until early March and the two weeks of quarantine would have put us four or five rounds into Super Rugby.

“Obviously that wouldn’t have been good for me or the Crusaders. We tried numerous ways to get back earlier. We thought about sending me out on my own, but I wasn’t really prepared to do that because there was no guarantee the family could come out later. With that in mind I didn’t want to put the Crusaders in a position where I was going to be turning up and going back because I was missing my family. They understood that family comes first.

“Both parties were pretty gutted we couldn’t get back together and there is a fair bit of our lives out there which we were going to sort out when we returned. We’ll have to do it from afar now.”

Despite his disappointment at not being able to stay with the Crusaders, Jones believes his time in the southern hemisphere will hold him in good stead for the future.

His coaching CV is certainly varied.

When the 47-cap international called time on his playing career in 2010, he was instantly made attack coach of his former side Scarlets. His coaching career blossomed in its early stages and he played a significant role as an assistant coach in Wales’ 2013 Six Nations title-winning campaign.

But after not seeing eye to eye with current Wales coach and former Scarlets boss Wayne Pivac, Jones decided to improve his management skills by dropping down to semi-professional level with RGC after a short stint at Rotherham.

“When you go straight from playing into coaching you miss out on an opportunity to experiment and to find how you are going to coach,” Jones said.

“What you have got up your sleeve is good tactical and technical knowledge because it comes straight from playing the game at international level, but I was still learning how to coach and manage people and how to integrate with other coaches.

“I could have gone and potentially been an assistant at professional level and on the face of it RGC was a step down, but it was really useful for me. One of the things the Crusaders liked in my initial interview was the fact I’d worked at all levels of the game and with all different types of people.”

Jones’ immediate challenge is to deliver with Worcester. Warriors director of rugby Alan Solomons was keen to welcome him on board once his Crusaders adventure was over.

“Worcester are an ambitious club who are very well settled financially,” Jones said.

“It is the whole package. I know they aren’t a household name, but Exeter weren’t either 12 years ago.

“We are hoping we can start the journey Exeter did over a decade ago and see if we can bring the club slowly and steadily up the league.

“It’s a set-up which is as good as anything in the Premiership. They are producing young players with Ollie Lawrence and Ted Hill jumping out at you and we have signed Duhan van der Merwe.

“Worcester have always flirted with relegation and haven’t finished above eighth so they’ve been at the wrong end of the table, but there is usually only two to three wins between being in a relegation battle and being in the top six in the Premiership.

“We’d hope to be edging up the table over the next few years.”