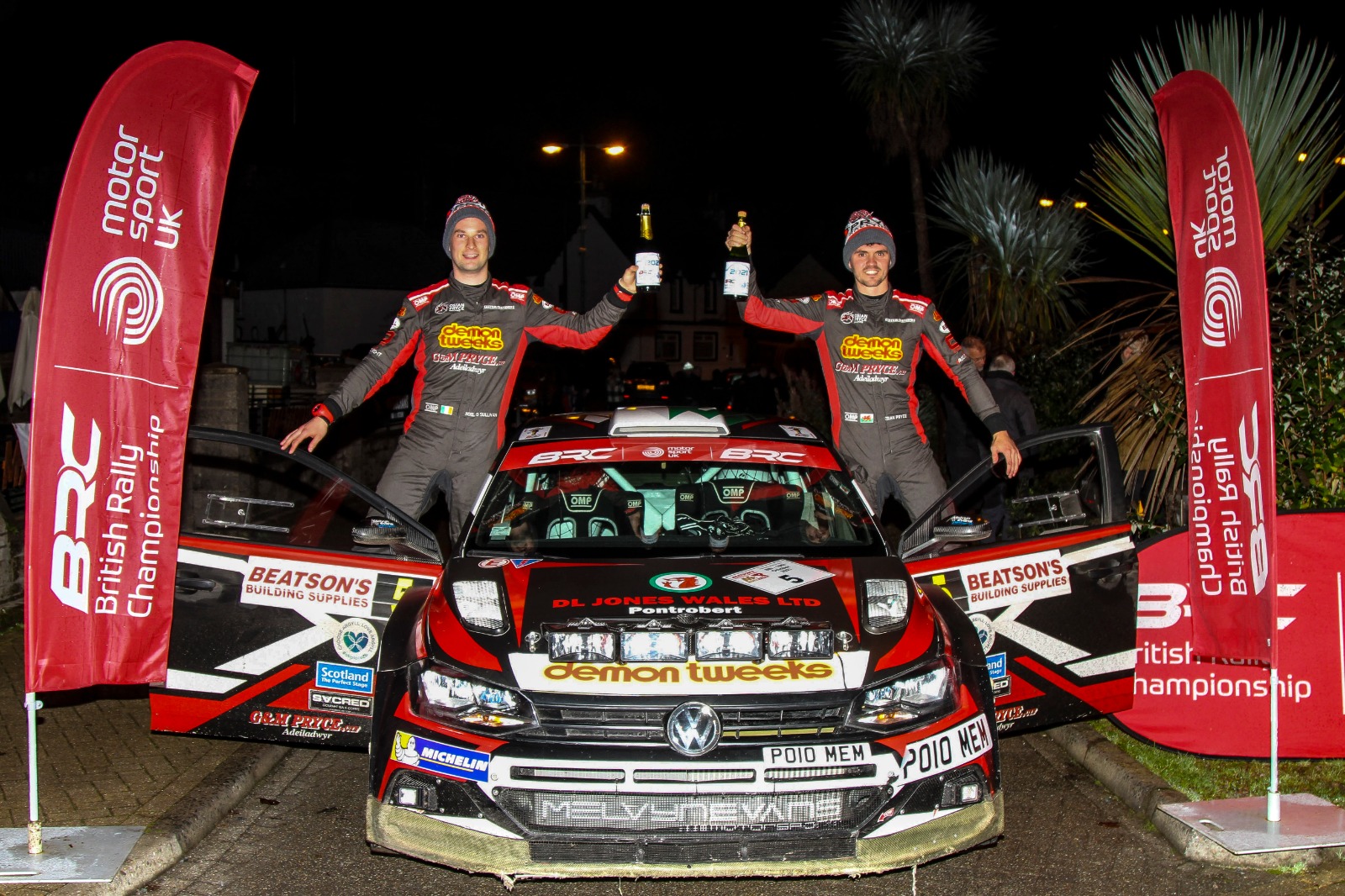 It’s almost certain that either Osian Pryce or Matt Edwards will be crowned British rally champion this year, and whilst both drivers were equally brilliant on the Mull Rally they each experienced a very different event as the longest and toughest round of the series played out on the Inner Hebridean island.

So different in fact that one driver triumphed by driving as slow as he could – while the other broke fastest time stage records.

But as in any classic tortoise and hare race, the big winner might surprise you!

Edwards doesn’t make unforced errors. Not only is he a double British rally champion, he’s a world class in-demand rally driver coach. He teaches young drivers how to stay on the road.

It was therefore a huge surprise to see him go off a few corners into the first stage.

Co-driven by Darren Garrod, Edwards arrived too hot into a tightening left hand corner near the start of SS1.

He yanked the handbrake on his Yuasa Rally Team Volkswagen Polo GTI R5 to prevent it crashing head-on and instead the car slammed backwards into a bank, braking the rear right suspension and brakes.

Edwards tied the broken bits together with the spare wheel strap, but by the time he reached service he was in last position.

Pryce had seen Edwards parked by the side of the road but competed the opening stage without a problem.

And this is where their Mull Rally went in opposing directions – Pryce not taking any risks from then on and driving fast/slow enough to maintain a joker playing bonus points scoring perfect score, while Edwards had to stamp on the gas in an attempt to claw back as much of the 14 minutes he’d lost as possible.

Pryce not only held his nerve but scored maximum British Rally Championship points for the first time in seven years and, together with co-driver Noel O’Sullivan, finished his very first Mull Rally second overall.

Edwards set fastest time on nine of the remaining 15 stages, broke several stage records and rocketed his way from 143rd to fifth overall – and was rewarded with points for the second place BRC finisher.

The result extends Pryce’s lead in the BRC drivers’ standings to 16 points, while Edwards remains second.

Pryce is the only driver to have scored a podium finish on every round of the 2021 BRC – with victory in Mull coming after second places finishes on the Grampian Rally and Trackrod Rally Yorkshire and third on both the Neil Howard and Nicky Grist Stages.

But he could lose a lot of points when the two scores to drop rule comes into play.

Edwards meanwhile has won the Nicky Grist and Trackrod but retired on the Grampian, meaning that he is already counting a zero score – with just the final two rounds remaining.

And Edwards is yet to play his joker, which if he won a rally could be worth an extra five points.

The battle between Pryce and Edwards for the British rally title will be extremely close.

And there is likely to be a Welsh squad winning the BRC Teams’ trophy, as Melvyn Evans Motorsport is well ahead in that category.

For many years that has been won by M-Sport and if successfully it will be the first Teams’ cup title for the Carmarthenshire based team.

“Mull has been a mentally draining rally more than a physical one and I’m absolutely delighted to score my first BRC victory since the 2014 Rally Isle of Man,” said Pryce.

“Having never been to Mull before, I’d listened to the advice of some of the local drivers and based our game plan on what they’d told me – which was not to go full chat on the opening leg and to bed ourselves in by getting a good feel and understanding of the roads. And they were right.

“It was hard to see Matt [Edwards] stopped by the side of the road so early in the opening stage. I was looking forward to a good battle, we’d come all this way to race hard after all, but because of his misfortune that left us in a big lead of the British Rally Championship section with the entire rally still ahead of us.

“I’d have loved to have pushed on and try to challenge for the overall victory, but with maximum BRC Joker points on the line we just couldn’t risk it.

“The hardest thing is the huge effort that everyone puts in to get us to an event like Mull.

“When you find yourself in a situation like that you just have to bring the car home. But to keep focused on the job in hand, especially in the middle of the night when I really would have loved to have a proper go, wasn’t as easy as it sounds.

“That said, I’m pleased I’ve done the job and pleased I took the gamble and played the BRC Joker because the plan worked in our favour. It’s the perfect points scoreand it’s extended our lead in the championship.

“Roll on the next event and let’s see if we can keep this winning momentum going. We’ve been chipping away trying to achieve this result for some time.

“We came close in 2017, so it’s nice to finally get a BRC win after seven years.

“Let’s hope it’s not another seven years until the next one!”

“It’s almost even more special to get the result we have on Mull after what happened on the opening stage and to have picked myself up and fought back in the way we have. I think I’ve learned a lot about myself this weekend,” said Edwards.

“I never give up. Never. But to tie the suspension together with the spare wheel strap and get out of the first two stages with no brakes and then perform in the way we did for the remainder of the rally highlights more than anything how much I want to win the British Rally Championship title again this year.

“I’ve been driving as fast as I could with the knowledge that I have of the Mull stages.

“Coming here for the first time is a big challenge and every time you drive a section of road you get to know it a little bit better.

“It’s very difficult to drive these roads at speed because they are so fast and technical and within every mile there is something trying to catch you out. But I’ve been committed to the pace notes and Darren’s done a great job – as has the Melvyn Evans Motorsport team.

“Despite our early drama and it being a long rally with two very tough night time sections I could keep going. I was enjoying driving the Polo so much and loving the challenge of the Mull roads that I’d have happily kept driving for another hundred and fifty stage miles!

“There are a lot of people behind the scenes who make this project happen and I just couldn’t let them down after my early mistake.

“I don’t do things like getting a corner so wrong and I’m proud that I was able to put it behind me and come straight back out fighting. And coming from 143rd to fifth overall, and from last to second in the BRC, isn’t too bad really, is it?!”

The next round of the British Rally Championship is Matt’s home round of the series, the Visit Conwy Cambrian Rally on Saturday 30 October.