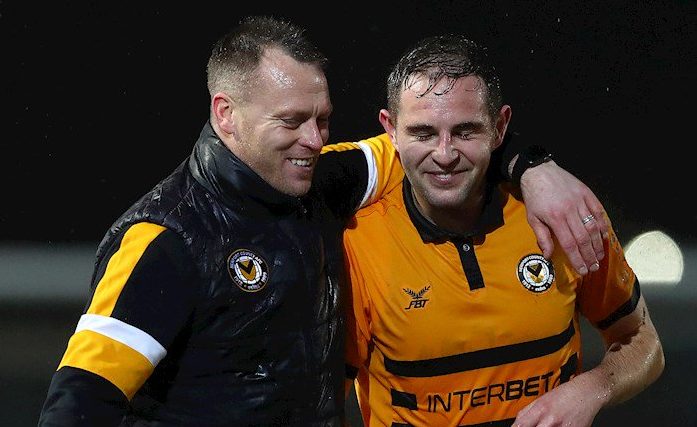 Newport County are slowly, but surely, piecing together their side for next season and midfielder-turned-defender Matty Dolan is the latest player to put pen to paper on a new contract.

The 28-year-old has agreed a new two-year deal that will see him remain at Rodney Parade until the summer of 2023 and allow him to add to the 166 games he has already played for the Exiles.

Currently in his fourth season after making the switch from Yeovil Town in 2017, Dolan has played a key part in the Exiles’ FA Cup runs and pushes for promotion from League Two.

It was his penalty at Mansfield that secured a play-off final place at Wembley two seasons ago and he also notched a last minute equaliser in the FA Cup at Middlesbrough that earned County a replay before they went on to knock out the Championship side.

This season he switched from his central midfield role to a new position in the middle of a back three and has so far contributed six goals and three assists in 42 appearances.

“I’ve played a lot of games for the club and we’ve gone from strength to strength since I’ve been here. I’d like to think I’ve performed well enough to earn a new contract this year, so I’m pleased to get it all sorted,” said Dolan.

Matty Dolan has signed a contract extension until 2023!✍️#OneClubOneCounty

“The loyalty that the club has shown towards me has been a big thing for me and my family. I felt welcomed since I first came here and I’ll be looking to help this club keep progressing over the next two years.”

Dolan has missed the last couple of games due to injury but has generally been the most consistent player on the park throughout the season for County.

Unflappable, good on the ball and a great reader of the game, he was one of the main reasons the Exiles topped the table for so long in the first half of the campaign.

“Matty has earned his new contract for his consistent performances and the outstanding attitude that he shows every day,” said County manager Michael Flynn.

“He has been a pleasure to manage since joining us four years ago.”

The only other players in the 25-man squad currently on contracts that run beyond this summer are defender Priestly Farquharson (2023) and strikers Padraig Amond (2022) and Dom Telford (2022).