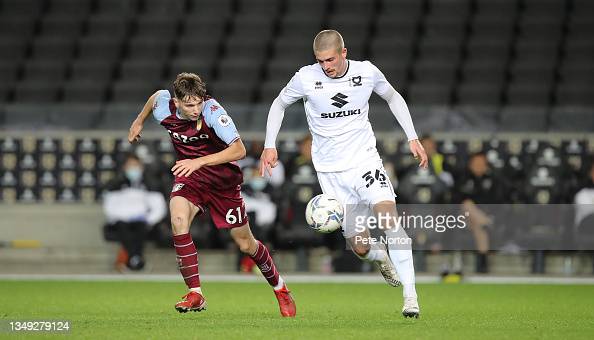 Max Watters is “really excited” about returning to Cardiff following a spell on loan with Milton Keynes Dons.

The 22-year-old – who joined last year for £1 million – was loaned out to MK Dons at the start of the season.

“I spoke to the manager and he said that he’d like to bring me back.” he said.

“He thinks I’ve done well at Milton Keynes, and he thinks I’ll fit in well once I’m back fit.

“I was really excited when he said that, and I couldn’t wait to come back.

LM: “Max (Watters) was a good character and he a good spell. I wish him all the best. I’m not one to dwell on things we can’t control. It actually makes it quite exciting to look at what can we do now, whether somebody in-house steps up or we have to bring someone in” pic.twitter.com/qhAUBX0sob

“If everything goes well, I should be back to full fitness in the next few weeks. I’m back running, so it’s just a case of getting fit and trying to get some game time in.”

After only making three appearances last season for the Bluebirds, Watters returns to the Welsh side after scoring seven goals in 14 matches for Milton Keynes, it’s no surprise that Morison wants him back.

“I didn’t get too much game time last season, and so I wanted to go out on loan. Milton Keynes looked to be the best option at the start of the season. The manager there, Liam Manning, really helped me a lot, and I really fitted into the team,” Watters told Cardiff City’s official website.

“It’s helped me to mature and become a better player. You’re always learning as a footballer, and the loan spell has helped me to learn new aspects of the game. Hopefully, I can bring that back to Cardiff and help the team out.

“I’ve been back at the training ground doing some rehab, so I’ve seen all of the boys. The squad hasn’t changed too much, and it was good to see the lads and be back around them.”

The Bluebird’s drew their last game 1-1 at West Brom and have only taken two points from their last four games but still haven’t got a clear win under their belt since the end of November, against Luton Town.

🗣️ “The manager thinks I’ve done well, and he thinks I’ll fit in well once I’m back fit. I was really excited when he said that!”

Cardiff have had their fair share of changes since Watters went on loan. Mick McCarthy has been replaced by Morison as manager, recent matches have been postponed due to Covid-19 and fans are currently not allowed into stadiums to watch matches.

“Obviously last season we didn’t have fans, so when the fans do come back again to Cardiff City Stadium that will be great to see. We have a great fan base with a great stadium, and it will be good to see them.

“Every game in the Championship is a big fixture, so I’ve just got to work hard and hopefully I can get into the team.”

Hopefully, the current restrictions won’t be in place for too long, meaning Watters will be able to take to the field with Bluebird’s fans giving him the full backing.

Cardiff next take on Preston at home, on Sunday in the third round of the FA Cup.