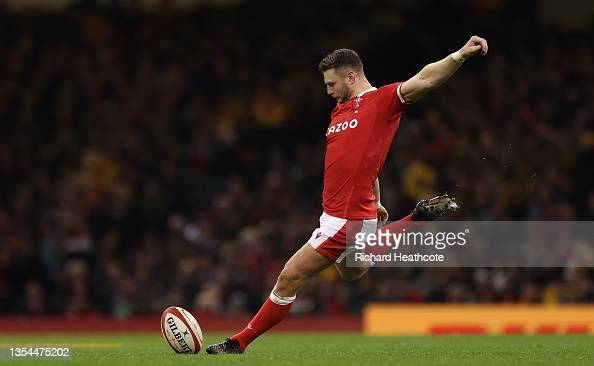 Dan Biggar of Wales kicks a penalty during the Autumn Nations Series match between Wales and Australia. Pic: Getty Images

Dan Biggar is concerned by the negative impact playing behind closed doors could have on the success of Wales’ Six Nations title defence.

The champions’ first home game takes place against Scotland on February 12 but, under Covid restrictions imposed by the Welsh Government, only 50 spectators are permitted to view outdoor events.

The guidelines are reviewed weekly and First Minister Mark Drakeford has refused to give assurances that fans will be allowed to return in time for the Six Nations as case numbers for the Omicron variant continue to surge.

Wales are also scheduled to host France and Italy at the Principality Stadium in March and face the prospect of playing over half the competition on home soil with the tiniest of crowds.

Meanwhile, sporting events in England have escaped restrictions for the time being, so Wales’ visit to Twickenham on February 26 will unfold before a full house of 82,000.

Biggar insists unless the rules are eased, Wayne Pivac’s side will be surrendering the benefit of playing in Cardiff.

“It would be great if we could have fans, wouldn’t it? You see what a difference it makes to an occasion. You saw it in the autumn, getting crowds back,” the Northampton and Lions playmaker said.

“Everyone coming to games now has to have a passport, they’ll be double or triple-jabbed and it’s an outdoor event, so I don’t see why they wouldn’t be allowed in. As long as it’s safe, that’s the most important thing.

“It would be a huge, huge step backwards if there are no crowds for clubs and the Six Nations, which is obviously such a show-piece event.

“We played a lot of games with no crowds and if you look at the first handful of them, they almost felt like training games.

“It felt like it did not really matter whether you won or lost because it felt like a training match and the intensity was knocked out of it. You lose any advantage of playing at home.”

Scotland, Ireland and France also have restrictions on numbers in place, while in Italy full houses are permitted as long as fans have proof of vaccination.

“I’m just relieved to have signed for a club in England. I think the rest of the lads in Wales are pretty frustrated with it. That’s normal, frustration, isn’t it?” Biggar said.

“We are probably getting into different things with politics now, but I think everything should be aligned.

“I hope for an event like the Six Nations and for the game up and down the UK moving forward that we get some sort of sensible outcome.

“As long as everyone is safe and double jabbed then I think it makes sense to keep crowds in.”

Biggar has 18 months left on his Northampton contract and the 32-year-old is determined to end his stay at Franklin’s Gardens with a trophy in the cabinet.

“If we can push for silverware in the next 18 months, that’s a huge aim for me. The club deserves to be pushing for that.

“There are lots of high scores in the Premiership at the minute, and that’s the way the game is going – you’re going to have to score a lot of points to win, especially in this league.

“Gone are the days of accumulating three, six, nine points and then edge a game that way. Week in, week out you are playing against the best players in the world in front of sell-out crowds.”

Saints and Biggar were beaten 30-6 at home to Saracens on Sunday, but they still remain sixth in the Gallagher Premiership and just four points behind fourth-placed Gloucester.