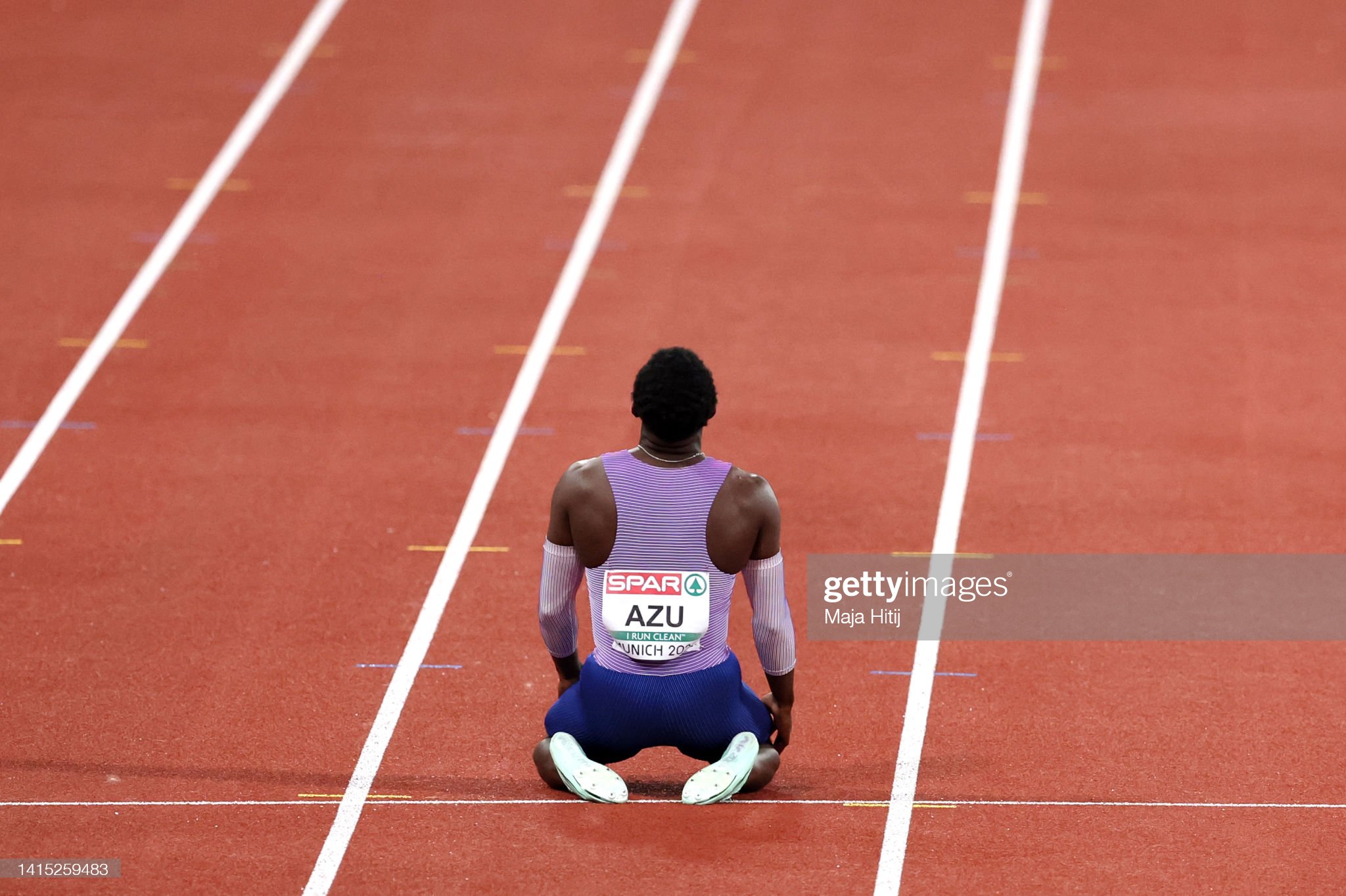 Jeremiah Azu has vowed to show his blazing talent on the world stage next year and avenge the “nonsense” of the ranking system that denied him earlier this summer.

The 21-year-old Welsh star produced a brilliant run to claim a bronze medal in the 100m final at the European Athletics Championships in Munich on Tuesday night.

It was a glimpse of the greatness that possibly awaits for Azu and his medal-winning potential at major championships in the future, including the 2024 Olympic Games in Paris.

Looking ahead, Azu said his main priority was to make sure of securing an individual spot at next year’s World Championships in Hungary.

“I’ve got two more races, then I’m calling it a day, so I’ll be done in mid-September,” he said.

Cardiff runner and British Champion, @Jeremiah_Azu, 21, takes the BRONZE in the 100 metres at the European Championships in Munich.

This is HUGE – putting Cymru on the international stage at 21 years old. 👏

“Then we’ve got World Champs next year, so this time I’ll make the standard so I can actually go, so there’s none of this rankings nonsense.

“I go to the trials, perform well and get on the plane to Budapest.”

A smiling Azu looked relaxed as he made his entrance into the historic Olympic Stadium – pretending to go the wrong way as he walked out onto the track.

But he was fully focussed by the time he took to his blocks alongside Europe’s fastest men.

Having made his trademark fast start, Azu was in contention for a podium place throughout the race as he chased Jacobs and Hughes, who had opened up a gap on the rest of the field.

Beyond the finishing line, Azu sat on the track waiting to see the result flash up on the stadium scoreboard.

The Cardiff athlete erupted into a celebration of unbridled joy, running and dancing in delight back down the track as he realised he had claimed bronze.

Listen to the lad. He’s world class . Mr Griffin will be in pieces! Always Blue💙@Jeremiah_Azu pic.twitter.com/vqMRpz2T5u

“I am fit. I had a little niggle mid-season, I came through it and I have come away with a bronze medal. I can’t complain. I ran a PB. I’m grateful to God, to my family, to my coaches, everyone that got me here

“People back home know how much of a struggle it has been. There have been a lot of things going on behind the scenes but I am still showing up. I came away with a medal – I am grateful.

Earlier in the evening, Azu clocked 10.17 finishing second in his semi-final to Hughes and ahead of former European silver medallist Jimmy Vicaut, of France.

Azu’s bronze medal follows his fifth place for Wales over the same distance at the Commonwealth Games earlier this month.

The European Under-23 100m champion travelled to the World Athletics Championships in Eugene as part of GB’s 4x100m squad, but picked up an injury.

King of the sprints! 👌

Marcell Jacobs 🇮🇹 is crowned European 100m champion in #Munich2022 in an equal championship record of 9.95. 👑

📺 Watch the race in full again at https://t.co/kyOqNg3jca#BackToTheRoofs

However, the Cardiff athlete has roared back in style in the past fortnight and is edging ever closer to Christian Malcolm’s Welsh record of 10.11 and the 10 second barrier which has proved elusive to the nation’s sprinters.

Azu, who is coached by Helen James, will have a chance to bid for a further medal later in the week as part of GB’s 4x100m squad.

Earlier in the day, fellow Welsh athlete Bethan Davies finished 11th in the 35k race walk – her highest finish at the European Championships, having placed 22nd in the 20k race in Berlin four years ago.

The only British representative in the final, the Cardiff athlete seemed to grow stronger as the race progressed, despite the rising temperatures on the streets of Munich.

After crossing the line in a time of 2:59.38, Davies said: “The heat definitely ramped up. It was okay to begin with as we started so early and the course was in the shade, but definitely in the second half.

“I was working really well with one of the Spanish girls up to about half way and then she picked it up and I had a bit of a wobble in the middle, but then I seemed to have a bit of a second wind as other people started to feel the heat, so I picked a couple of people off.

.@jeremiah_azu‘s reaction to winning bronze in the 100m final in #Munich2022 is everything. 😭😭😭#BackToTheRoofs pic.twitter.com/PPzdj32nst

“It’s the highest I’ve ever finished in a competition like this so I’m over the moon. I want to review my season now, and then I’d really like to double – do a 35 and a 20 at a major championships.”

Davies, who finished sixth at the Commonwealth Games over 10k, added: “I probably need to figure out how to plan my season so I can get the qualifying marks for both.

“I’m definitely looking forward to a good break now though because it’s been a busy old year!”

During the morning session on the track, Melissa Courtney-Bryant lined up in the first heat of 1500m qualifying alongside fellow Brit Laura Muir.

Welsh record holder Courtney-Bryant looked good during the first three laps of the race, appearing to be well in contention for a place in the final.

Just fantastic work Bethan!! 11th in Europe. Fantastic to see you back competitive in the GB vest! @Beth_Davies7 💙💙💙 https://t.co/yidlawIxpt

But as Muir moved to the front and upped the pace, the Poole AC runner moved back down the field and eventually crossed the line in 10th place – out of the qualifying places – clocking a time of 4:09.11.

Courtney-Bryant, who has represented GB at the World Athletics Championships and Wales at the Commonwealth Games in recent weeks said: “That’s not what I wanted, I really wanted to qualify.

“Unfortunately, I raced quite fast in June and since then all the championships haven’t gone my way.

“But I’m coming back from injury and missed a lot of work in the winter and I think that is showing now, my general fitness and strength.”

“I was right there with 300m to go, unfortunately my legs went. But I’m really proud that I put myself out there and gave it a shot today. I committed and went for it, but it didn’t pay off today.”