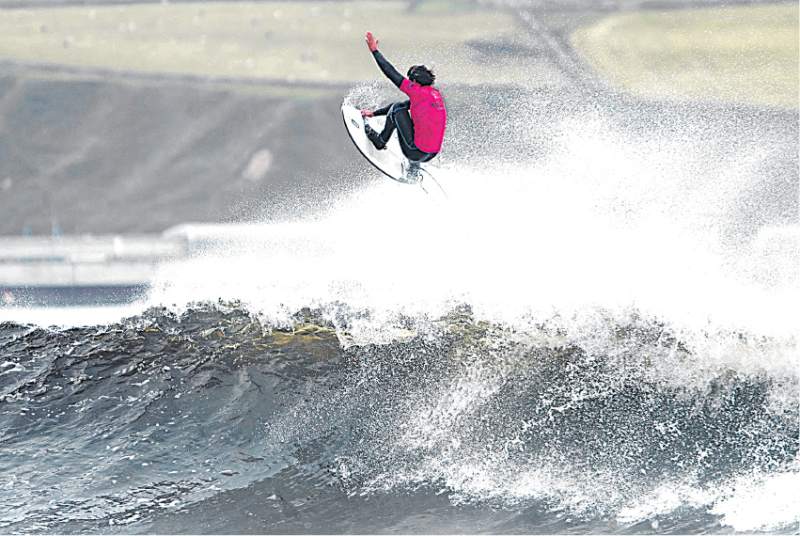 Surfing courses through the veins of British No.1 Jay Quinn, but so does the Welsh blood that could see him represent his adopted nation at next year’s Olympic Games.

Born in Gisborne, New Zealand, the 35-year-old made it back-to-back European titles in Portugal last week representing Team Wales and now has his sights firmly fixed on joining Team GB in Tokyo next year.

Although he admits having hated his first attempt at surfing, and secretly wishing he had become an All Black, Quinn didn’t really have much choice about which sport he was destined to excel at.

“I used to be into rugby union, but due to growing up in a surfing family I never got the sign off to go and play. I grew up with Craig Clarke, who went on to play for the All Blacks, but I always went surfing,” explained Quinn.

Many Kiwis have headed to Wales to play rugby, but Quinn relocated to Britain’s surfing capital, Cornwall, two years ago, with one thing in mind – to compete for the land of his mother.

Through her qualification he has been able to represent Wales at the past two European Championships and will hope to realise his Olympic ambitions in September.

The International Olympic Committee (IOC) signalled it was looking to embrace youth culture in announcing surfing, skateboarding, sports climbing and karate would all be featuring in Tokyo 2020.

Japan has a surfing tradition, although it is not regarded as a destination for particularly big waves and there has even been some talk the Olympic debut for the sport could even end up taking place in an indoor man-made surfing pool, using the latest wave technology.

One of six surfers selected for the British Surfing team to head to Miyazaki, Japan, to compete in this year’s International Surfing Association World Games, Quinn will have to finish among the top Europeans to qualify for Tokyo.

“My mum moved to New Zealand from Wales when she was five. She is still really proud of her Welsh heritage and when I was growing up surfing in New Zealand one of my goals was to win a Welsh title at some point and represent the nation,” said Quinn, who duly took his first Welsh title at Freshwater West in 2017.

“I decided to come to Newquay because competitive-wise it is the surfing epicentre for the UK.

“I have now won the Welsh title but due to a technicality I was unable to represent Wales at the ISA World Championships at Biarittz in France.

“But I’ve since been able to represent Wales at the Euro Surfing Championships in Norway and Portugal. My mind is good and I’m feeling confident every time I get in the water.

“Obviously, time’s not on my side anymore, so I want to make the most of every opportunity I get.”