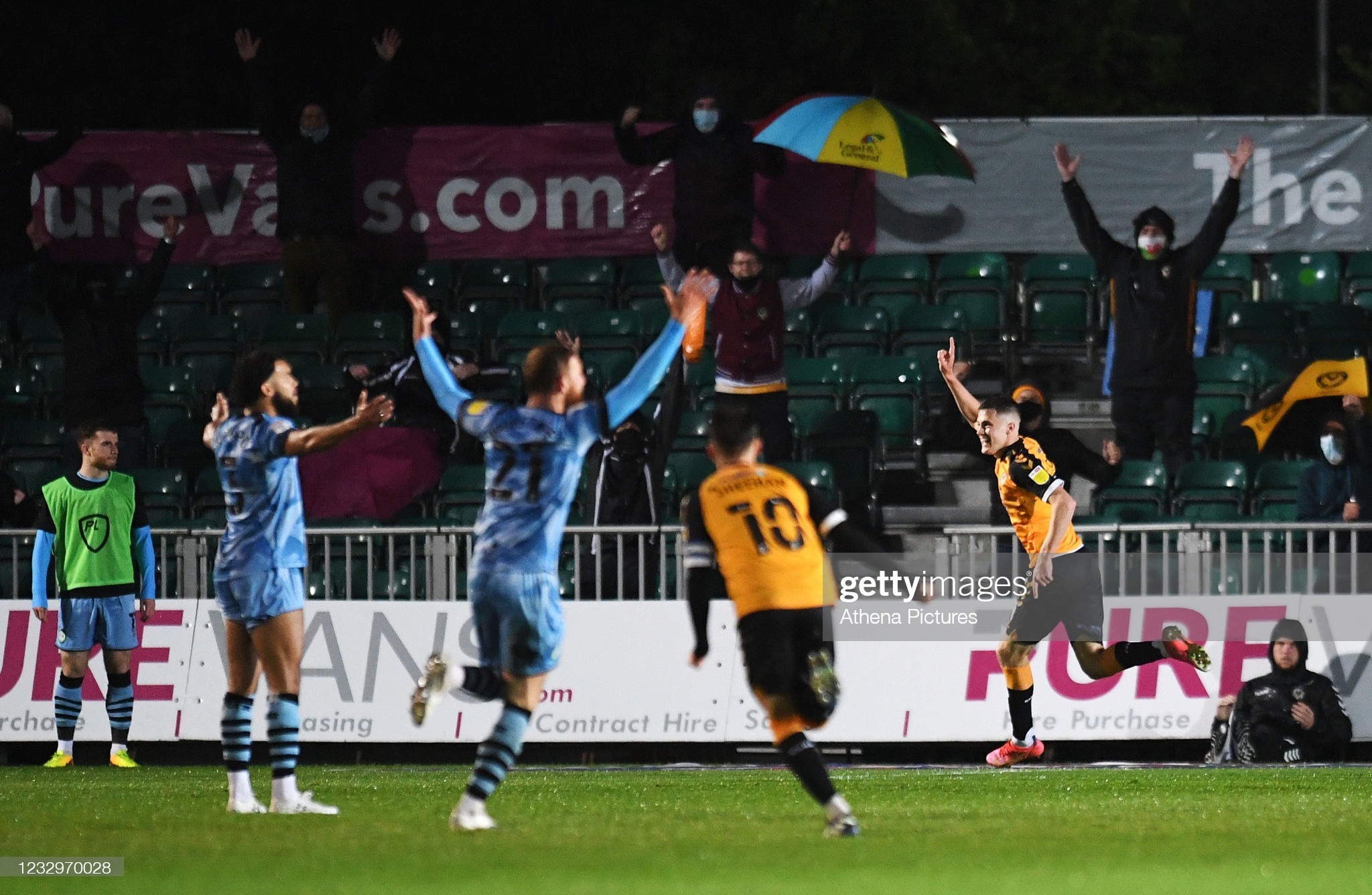 Michael Flynn admitted there was anger and frustration coursing through his veins – as well as a good deal of pride – after Newport County took control of their promotion play-off semi-final.

Lewis Collins won the battle of the brothers as a decisive and determined County put themselves into a commanding position with a 2-0 victory over Forest Green Rovers in the first leg of their League Two play-off tie.

Collins made a composed finish to put Newport 2-0 ahead in the second-half, just seconds after elder brother Aaron had missed a major opportunity to equalise for Forest Green.

The visitors were trailing 1-0 after an exhilarating opening goal from Matt Dolan, when their own Collins sibling was picked out with a cross to the near post, only for the striker’s glancing header to drift just wide.

Less than a minute later, 20-year-old Lewis was played in behind the Forest Green defence and calmly slotted the ball beyond goalkeeper Luke McGee, to prompt noisy celebrations from the 900 Newport fans present.

The victory was a fully merited one for Newport, who could easily be traveling to Gloucestershire this Sunday with a three or four goal advantage – a fact that irritated Flynn.

“It was a very, very good performance but I am little bit angry we didn’t kill the tie off,” he said.

“We should have certainly scored a lot more than two goals. I am not getting carried away with this, because we had a chance to put in to bed and we didn’t.

“We saw what happened last season between Cheltenham and Northampton. Anything can happen in a second leg. They are a very good team and we will have to be at our very best to go through on Sunday.”

If the missed chances by Newport meant the contest is still alive, Flynn was delighted with his team’s overall dominance and the quality of the two goals which could prove decisive.

“Matty has got fantastic technique whether he plays at the back or in midfield. He deserved that because he had been out of the team for a little bit because of concussion.

“I was really pleased for Lewis because he is so hard on himself when he doesn’t take his chances. That second goal gives us a bit of a cushion. I would have liked, and I thought we deserved, more.

“I will never let the players think this tie is done. We will have to be at our best on Sunday to get through to Wembley.

County’s Irish striker Padraig Amond, a hero of various cup victories in recent seasons, had opportunites at either end of the tie, while Aaron Lewis volleyed wide from six yards with 12 minutes remaining.

Had any of those chances been taken, Forest Green could have had few complaints as the neatness of their approach play too often dissolved in the final third.

Only midfielder Odin Bailey looked likely to reply, but his best effort was smothered by keeper Tom King, although the Rovers player was unfortunate when his first-half free-kick clipped the crossbar.

Forest Green’s owner Dale Vince has recently called for clubs to spurn shirt advertising from gambling companies, but none of them on his hit list would offer anything other than long odds on Forest Green reaching Wembley unless they can manage a dramatic turnaround.

Dolan’s 31st minute goal was a thing of beauty, a shot struck so sweetly with his left foot from 25 yards it made the rising trajectory of a surface-to-air missile as it searched for the top right-hand corner.

But the magnificence of the finish would not have been possible had Newport striker Collins not shown huge tenacity to win the ball on the left before cutting inside.

The goal must have felt cathartic for Newport’s Collins as he had earlier wasted a great opportunity to put his side ahead.

Neat interpassing from the home side involving the influential Sheehan opened up Forest Green’s defence, but Collins stabbed his shot from eight yards and goalkeeper Luke McGee was able to save with his legs.

There were other wasted opportunities and Jimmy Ball, Forest Green’s interim manager, said: “There is still a lot to play for. A 2-0 scoreline is not a comfortable place to be, by any means.

“There were chances out there for us tonight and this is far from over.”

“We were a little bit jittery and they really came after us at the start. We passed it a little bit better and got things moving after that.

“We hit the bar, their keeper made a great save and Aaron Collins flicked a header just wide. Those are the fine margins in football.

“But a 2-0 scoreline can be a bit of a daunting place to be. We will lick our wounds and we will be okay. I still think it is all about us and we have to do things better than we did tonight.

“The quality wasn’t there and I didn’t like the fact we were out run and out fought.

“The next game is do or die and we have had a few of those already this season.”