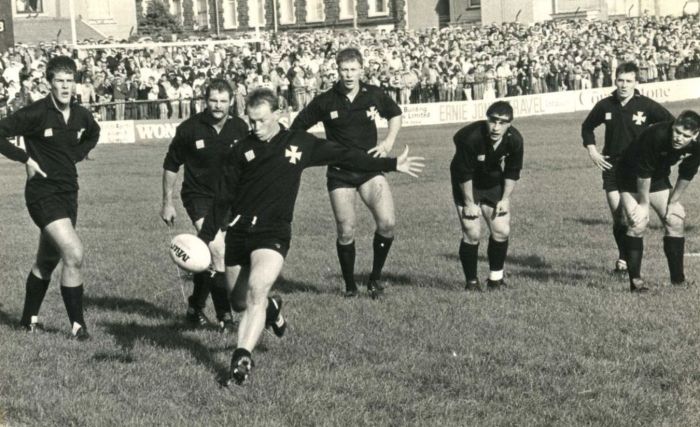 Paul Thorburn launches a kick for Neath in 1988.

Two of the great survivors of British club rugby meet for a high noon shoot-out this Saturday.

London Welsh and Neath’s pre-season friendly at The Gnoll will serve as a more than tasty appetiser for the World Cup warm-up match between Wales and England later in the afternoon.

During the 1970s, the star-studded London Welsh side of John Dawes, John Taylor, Gerald Davies Mervyn Davies, JPR Williams et al were widely regarded as the finest club side in the land.

Meanwhile, Ron Waldron’s fearsome Neath team of the mid to late 1980s can certainly lay claim to being the best side in Wales at that time – and many would argue the best in Britain.

When England’s finest, Bath, came to the Gnoll in 1986, they were sent packing following a 26-9 defeat which featured a brilliant individual try by a young Jonathan Davies.

In 1989, the mighty Welsh All Blacks, featuring the likes of Kevin Phillips, Brian Williams and Allan Bateman set a new world record for points (1,917) and tries (345) on the way to winning the Schweppes Cup and unofficial Welsh title.

More recently both of these great British rugby institutions have experienced hard times.

London Welsh’s professional team was expelled from the Championship and relegated to the ninth level of English rugby in January 2017 after failing to satisfy the RFU criteria for Championship rugby.

Similarly, Neath last year faced a winding up order and were forced to loan players on permit from local clubs in order to fulfil their fixtures.

However, both clubs are now on a more secure footing on and off the pitch.

The Exiles’ long climb back up the English league ladder has seen them cruise to successive promotions in the past two seasons.

Now, they are in year three of a five-year plan to rise back up the English rugby pyramid. This season will see them play in London 2 North West.

While Neath are under new ownership which has brought an air of optimism ahead of this year’s SWALEC National Championship campaign.

Coach Pat Horgan says: “We have had 30-40 players training regularly with us all summer and everyone has worked hard.

“We have another game against Resolven next Tuesday so we will have the opportunity to see most players in action over these two games.

“The boys are raring to go, itching for game action and it has been a question of holding some of them back a bit.

“Consolidation is the key but we hope we can challenge, too, as we need to get back to the high standards expected of Neath RFC.”

Saturday’s match up between the old rivals has generated excitement on both sides of the Severn Bridge and sparked a healthy dose of nostalgia for the glory days of this fixture.

The two clubs first met on December 22, 1890. The match ended in an inauspicious 0-0 draw but started a long standing tradition of them facing each other over the festive season in South Wales, with the fixture regularly being played on Christmas Day up until 1965.

The 1953 match between the two clubs was refereed by a certain Denis Thatcher, whose wife Margaret went on to make something of a name for herself in politics!

Some of the match line-ups over the years would read like a who’s who of Welsh rugby greats.

Among those who took the field for the home side at Old Deer Park in February 1974 were Wales and Lions stars JPR Williams, Gerald Davies, Clive Rees and John Taylor.

Saturday’s match may not be a fantasy rugby clash between London Welsh’s Lions-laden side of the Seventies against Ron Waldron’s warriors of the late Eighties.

But the fact that these two rugby powerhouses are still in existence and renewing one of the sport’s great fixtures is cause for huge celebration, not only amongst supporters of both clubs but British rugby as a whole.

And there will be a couple of famous family names from the past in the visitors’ line-up.

Turning out at full back is Rhodri Dawes, grandson of the great London Welsh, Wales and British Lions captain John Dawes.

While at prop there is certainly a name to bring back memories on the day of a Wales v England match.

Joel Ringer is the son of Welsh rugby great Paul Ringer, controversially sent off against England at Twickenham back in 1980.