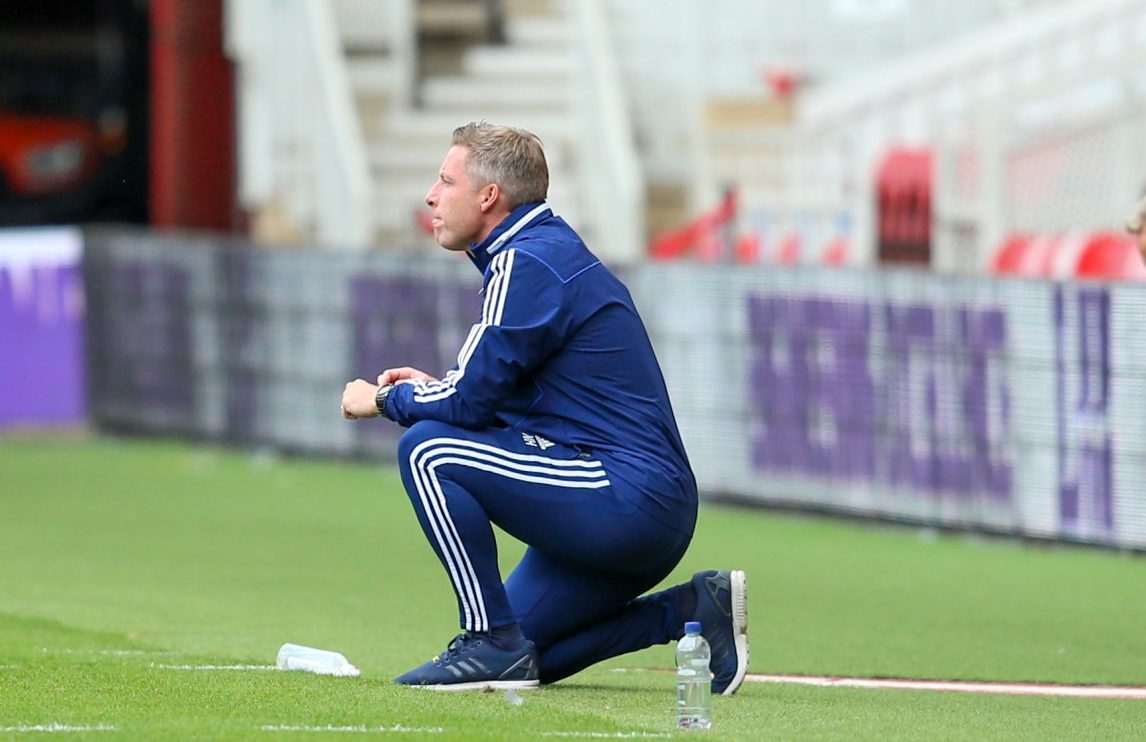 Neil Harris insists he has no fears of losing his job as he vowed to turn-around City's fortunes Pic: Getty Images.

Cardiff were 3-0 down at Leeds, got it back to 3-2, but then had Sean Morrison sent off before they eventually equalised to take a point from the team who became champions.

Draws are no good to them at Fulham, this evening, however. Nor, even, a victory margin of one goal after their 2-0 home defeat in the first leg of their play-off semi-final.

After an evenly contested first half, a Josh Onomah strike and injury-time Neeskens Kebano free-kick put the Cottagers firmly on course for the Wembley final, but Harris insists the tie is far from over.

“We understand the monumental task in front of us but, with backs to the wall, we’ll come out fighting,” he says

“The atmosphere in the group is brilliant and we are really looking forward to the challenge of trying to overturn the deficit.

“We’ve been written off, we’re massively the underdog now. We’re being questioned in some departments. We want to respond and we will respond.”

Harris succeeded Neil Warnock in November and steered the side to fifth in the table, eight points behind fourth-placed Fulham.

He takes confidence from his team’s away record in the second half of the campaign and wants to invoke the spirit that saw them recover at Leeds in December.

“I spoke to the players with some facts, some passion – the fact we’ve won six out of our last eight away games. No team in the Championship has picked up more away points than us since I took over.

“(These are) important facts – just to remind the players of the ability that we have got on our travels, coupled with the quality we have got in the changing room and the desire we have got.

“We were 3-0 down at Leeds and came back. We won at Ashton Gate, we won at Preston, won at (Nottingham) Forest. We’ve been to Middlesbrough in a challenging environment (and won).

“We’ve had some really important wins. When our backs have been up against the wall we have stood up to the challenge and we have got to do it one last time. We’ve got the ability to do it.”

An unfancied Cardiff winning by a three goal margin in front of Sky cameras at Craven Cottage? If only there were some historical precedent #spiritof97 #FULCAR

No team has ever come back from 2-0 down after the first leg of a Championship play-off, but Harris says his unpredictable team can be inspired by history rather than cowed by it.

“That’s our task in front of us and we’re not going to shy away from that task. We’re not frightened. We look forward to the challenge.”

“We have to break it down, first half then second half. Make sure the players understand what we want from them, from team selection, impact from the bench, how we want the game to go.

“We can be a dangerous, wounded animal to come back and hurt teams. We have to use that passion, determination and resilience in abundance on Thursday night.”

Harris recognises, however, he has to get the balance between defence and attack right. Goals are needed but conceding early could put the tie completely beyond them.

“The truth is we have to score two goals more than Fulham to take it to penalties, (or more) to win after extra time or 90 minutes.

“The first goal is going to be vital, we understand that, but the game doesn’t have to be won in the first 10 minutes. Goals at key moments change any game of football, certainly play-off games.

“It is not going to be easy, we are fully aware of that, but we are up for the challenge.”

Harris accused Fulham of celebrating their first leg victory as if they had won the whole tie in the moments after the first leg – a claim that was rebuffed by Fulham manager Scott Parker.

The former Millwall boss has expanded on that statement – but not retracted it – a fighting spirit and refusal to yield ground that his players are going to need at Craven Cottage.

“That wasn’t Scott Parker at all, I was just talking about the reaction from the second goal. Maybe it was just magnified because of the lack of crowd in the stadium.

“I’m not retracting that statement but I’m not adding anything to it – that’s done now, finished. The importance is the second leg.