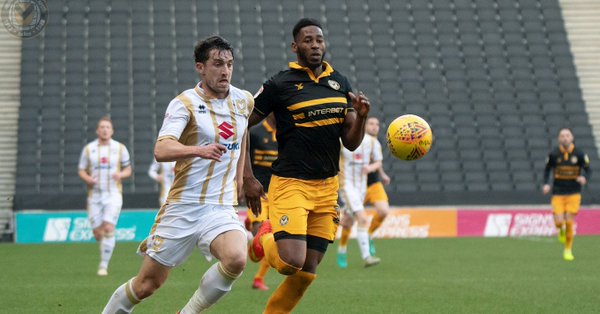 Newport County remain focused on earning a place in the League Two play-offs despite their 2-0 defeat at MK Dons.

“We have a tough home game next weekend against Carlisle United and we need to win it.

“Carlisle have had a great season so far and it’s going to be difficult.”

County are eight points adrift of Exeter City in the final play-off position and, while they don’t have a game in hand over the Grecians, they do on the other teams challenging for the play-offs.

The Exiles ran out of steam at Stadium MK following a gruelling run of tough fixtures and Flynn is delighted there is no midweek match for his players.

Goalkeeper Joe Day saved a first half penalty at MK Dons and the match was goalless at half-time, but the home team earned all three points.

“We were just a bit flat,” said Flynn. “It was probably one too many for the players and it’s caught up with them. We huffed and puffed, but weren’t our usual dynamic selves.

“I’m gutted we weren’t able to build the great performance at Notts County, but we got what we deserved because we didn’t do enough to win the game.

“It’s hard to put your finger on, but we chose the wrong options throughout the game. I don’t think we got hold of the midfield area either so it was frustrating.

“And the two goals we conceded weren’t good enough.

“I told them at half-time that they would have to go out and raise themselves because you could see it was flat.

“I felt sorry for the forwards the most because they’ve played all season. They give their heart and souls game in game out, day in, day out with the amount of running they do.”

The Exiles have 13 fixtures left this season and the first of those is against Carlisle at Rodney Parade on Saturday.

Goalkeeper Day made a magnificent first half penalty save, but man of the match Ousseynou Cisse powered home a header home on 57 minutes before substitute Chuks Aneke confirmed the points in stoppage time.

The penalty came after 25 minutes when Conor McGrandles appeared to run into Dan Butler. Referee Sebastien Stockbridge saw that as a foul and awarded MK their ninth penalty of the season.

Day, though, dived superbly to his left and turned away Agard’s powerful attempt.

But Dons’ second half double earned the victory.

Manager Mike Flynn was forced into two changes at Stadium MK. Joss Labadie wasn’t risked pending the results of a scan on a potential calf injury, while Fraser Franks picked up an illness and missed out.

The loss of Labadie from the starting line-up was a blow for County. There was a lack of dynamism in the middle and that cut and thrust nature of his play.

Tyreeq Bakinson and Matty Dolan were the players called into the team.

Newport will recharge energy levels with a relaxing week and prepare for their 13-game run-in.