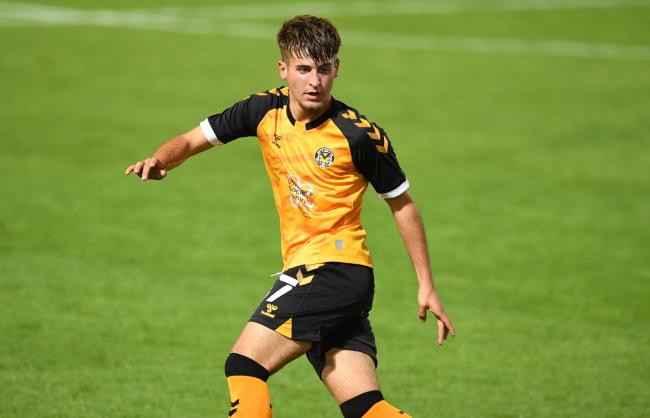 Sonny Lewis made his Newport County debut at the age of 15.

You’ve got to take your hat off to Newport County boss Michael Flynn, he’s never afraid to take a gamble.

On Tuesday night he was confident enough to pick 15-year-old Sonny Lewis to make his debut in the Football League Trophy clash with Cheltenham Town.

This weekend he’s pondering on whether or not to give 41-year-old Kevin Ellison his first shot in County colours at Scunthorpe. Lewis wasn’t born when Ellison kicked-off his professional career in 1999!

As far as Flynn is concerned, if you are good enough, age is simply a number. His judgement on the talents of teenage tyro Lewis and seasoned veteran Ellison did, however, come with some inside knowledge.

He played with Ellison, who is two years older than his new boss, at Bradford seven years ago and first spotted Lewis playing in the street when he returned to live in Newport

“If they are good enough I will give them a chance – I don’t care about their age. Whether they are 15 or 41, I will make my own decisions and I will stick by them,” said Flynn.

“It’s never nice losing a game, but there were a lot of positives against Cheltenham. We changed it around, changed the formation and gave a lot of people their debuts.”

Star billing among the debutants was Wales U15 cap Lewis, a midfield player who first joined County in their U11 and was given a pre-scholarship when he was 14. He became the fifth youngest player to appear in the competition at the age of 15 years and 251 days.

The record is held by Rochdale’s Peter Thomas at 15 years, 22 days – and overtook the previous record for the Exiles held by Regan Poole at 16 years, 94 days.

“We had to get a letter off his headmaster and his parents to allow him to play. I didn’t tell him he was playing because I didn’t want him thinking too much about it and worrying,” said Flynn.

“He was a little bit late arriving and we all thought he had been given detention. He grew into the game and after the first 10 minutes he was excellent.

“He used to live by me when I first moved back to Newport. Then he was just a little kid playing in the street, so now I definitely feel old!

“It’s exceptional for a 15-year-old to make their debut no matter what competition it is. I’m really pleased for him.

Here’s a closer look at the young Exiles who have been included in Michael Flynn’s squad for tonight’s EFL Trophy clash against Cheltenham Town.

“He’s a good kid, but he’s got a lot of hard work to do to keep improving and make the step up. I’m sure I can guide him in the right way and I’ll do all I can to help him.

“All the youngsters have to continue their development. They can’t go thinking they have cracked it,  like a few have in the past, and go back to the academy thinking they are the bee’s knees.

“They need to work even harder now to be with us more permanently. That will be harder for Sonny, because he is still in school, so we will have to wait and be patient with him.”

Two 17-year-olds, striker Ryan Hiller and wing back Lewys Twamley, also came on to make their debuts. It was also a special moment for County striker Padraig Amond, who found himself surrounded by players he had coached in the club’s younger sections.

“It was disappointing to lose, but I was very proud that five of U16 side coached by myself and Steve Davies two seasons ago were involved in the game – four of them playing,” the Irishman tweeted after the game.

Swansea City loanee Brandon Cooper was another newcomer and the Wales U21 cap is likely to be the only one of the newbies who heads to Scunthorpe for this weekend’s League 2 opener. Flynn will be hoping for a return to the form that saw his side dump Swansea City out of the Carabao Cup last Saturday courtesy of two goals from Tristan Abrahams.

That victory gave Flynn’s men a flying start to their new campaign, but the midweek defeat to Cheltenham didn’t dent the manager’s hopes for the season.

“It was a very worthwhile game for us against Cheltenham and a very good performance. We just missed too many chances,” he admitted.

“It was just a lack of composure – we put four or five over the bar. It was actually harder to get the ball that high rather than to hit the net.

“That’s something that we will work on but the overall play was very good and I was impressed with the boys that came in. It was a very good performance against a Cheltenham side that got to the play-offs and have a very good squad.”