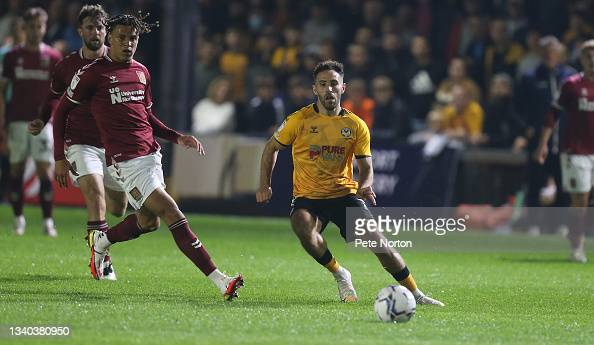 Michael Flynn has vowed to axe players from his Newport County side due to host Walsall on Saturday after being angered by the manner of their home to defeat to Northampton.

The County manager was furious with his side’s performance in Tuesday night’s 1-0 loss and warned heads will roll after they missed out on a chance to move into the top half of League Two.

In fact, Flynn revealed he had to try and calm himself as his blood boiled, since he is still suffering headaches as a result of his recent bout of Covid-19.

“Some of the performances were dreadful,” admitted Flynn.

“But there are not too many people putting their hands up for a start at the minute. Not too many of them have been consistent enough.

“I can’t even get too angry because I am still getting the odd headache [after having coronavirus], that’s why I was sat down in the dug-out.

“It was probably the most forceful that I have been as a manager because you can’t have a game plan and work on everything and then toss it out of the window.”

County not only missed out on the chance to climb into the top half of ther table, but they also saw influential midfielder Scot Bennett carried away on a stretcher.

The only goal of the game came from centre back Jon Guthrie, who lashed the ball home with his left foot in the 43rd minute after picking up a second ball on the edge of the six-yard box.

“A few have played themselves out of the squad completely, some of the performances tonight were dreadful… but I pick the team and I’ll take this one on the chin.

“I don’t at the minute [know the severity of Scot Bennett’s injury] and that’s probably summed the evening up, because he’s a key player for us. I just hope it’s not a bad one.

“We picked the team to play football [on the deck] – I am not going to go with Lewis Collins and Timmy Abraham up front if I am telling them to kick the ball long,” said the boss.

“They let themselves down, and I have to take responsibility for that. The buck always stops with the manager and I picked the team, so I will take the blame.

“We are quite clear on what style that we want to play, but you can lead a horse to water but can’t make it drink. I need to get my team selection right.

“We knew Northampton would be physical and that’s why we picked a team to play football and play around them. There wasn’t enough movement or options on the ball, then the decision-making was diabolical.”

Flynn made four changes to the side that had drawn on the long trip to Harrogate four days earlier and gave teenage midfielder Aneurin Livermore getting his first start in a league game and Liverpool loanee Jake Cain making his home and league debut.

The Newport boss had complained to his defenders for the way in which they had conceded the two goals in Yorkshire and was looking for a more solid performance on the day that goalkeeper Joe Day celebrated his 250th appearance for the club.

Neither goalkeeper was called into meaningful action for almost the entire first-half as both teams huffed and puffed without ever generating anything positive. Northampton did their best to stretch the home defence from side to side and ensured Newport never got into their stride with their physical approach.

They dominated the collisions, won the 50-50 balls and the way in which the giant Northampton skipper Fraser Horsfall set about Timmy Abaham every time the home striker got near the ball was a throw-back to the seventies.

Newport opened brightly to give the crowd something to cheer and a neat ball by Ryan Haynes allowed Cain to float into the box and pull a low cross back towards goal that raised alarm bells in the visiting ranks.

Priestley Farquharson then had to move sharply in the Newport danger-zone to block a shot on the turn by Nicke Kabamba, but still neither goal came under real threat. Things changed a few minutes before the break when Livermore recklessly lunged to-footed into an illegal tackle 30 yards out.

After some pushing and shoving the referee stepped in to give the 18-year-old a lecture and a yellow card. Mr Hicks was then taken to the dug out by the fourth official where he promptly gave visiting manager Jon Brady a yellow card for his comments about the incident.

Up stepped Mitchell Pinnock to swing the ball into six-yard box, Danny Rose got the touch and waiting to make the most of second ball was central defender, who smashed the ball into the roof of the net with his left foot.

The Exiles were condemned to a 1-0 defeat against @NTFC at Rodney Parade.

The second half followed a similar patter, with Northampton continuing to outmuscle their hosts and Flynn’s men being guilty of launching too many balls aimlessly up to their front line – and getting them back just as quickly.

Flynn brought on Kevin Elison and Ollie Cooper just short of the hour mark to try to change things up, but the next big chance fell to Northampton striker Kabamba after a cross in from the left by Ali Koiki. His downward header seemed destined to hit the target, but somehow Day dived to his right and parried it away.

Newport didn’t get away without some danger, though, as they lost Bennett after he went down heavily in the challenge and was led away from the field on a stretcher with what looked like a serious leg injury in the 72nd minute.

As the game become more and more tense, the Cobblers began to look to hang on to what they had and Danny Rose and Shaun McWilliams both went into the referee’s notebook. They weathered the storm, though, and left with the three points that lifted them into the play-off places.