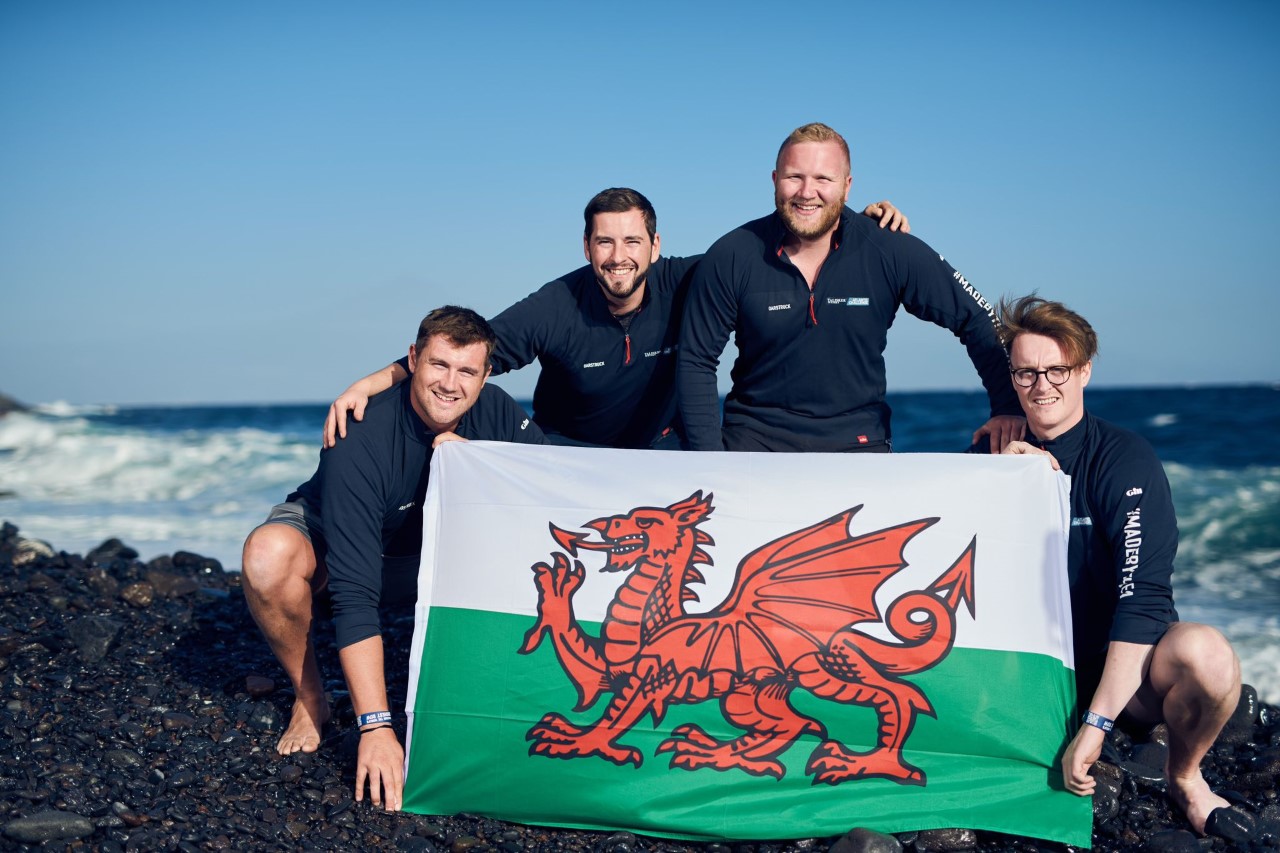 As this year’s Talisker Whiskey Challenge entrants recover from their efforts, one former competitor – Welsh rower Monty Williams – tells Haydn Evans why he loved the challenge, but will probably never do it again.

Every year, around 30 crews of brave – or just bonkers – people attempt to row 3,000 miles across the Atlantic Ocean.

A few rowing novices, and some battle-hardened professionals, attempt to use only arm-power to go from La Gomera in the Canary Islands to Antigua in the Caribbean.

As this year’s weary competitors return home from the other side of the ocean, Monty Williams, a kitchen designer from Magor, recalls his own 55-day crossing in the 2017 race and admits it’s unlikely to be repeated.

“I’d love to take part in the challenge again,” he says. “But I’m not sure I’m ready to put myself through the planning, training, and it taking over my life again.”

Monty and his old school friends from Caerleon Comprehensive in Newport – John Morgan, a landscaper/builder from Usk, Joel Wood, an electrician from Caerleon and Hugo Thompson, a salesman from Llandegveth Village – are all 30 years old.

They were 26 at the time of the row, when they decided to tackle this monumental challenge whilst raising money for Diabetes UK, despite all having no rowing experience at all.

“I was driving home from work one day and I had a missed call from Joel (his crewmate) so I rang him back when I got home,” says Williams.

“He said, ‘do you want to row across the ocean? I didn’t even know what that meant.

For a quartet with no boat, no equipment, and no money the logistical challenges of the row were massive.

His team – Oarstruck – had to fork out 20,000 Euros just to enter the race as well as north of £30,000 for the boat, which they had purchased from a team which had successfully crossed a couple of years previously.

It meant the team needed months of fundraising to pay their monthly payments on the boat.

“The first time we got in the boat, we took it down to Cardiff Bay and just rowed round and round in circles for 24 hours which was a bit of an eye-opener,” says Williams.

“In terms of physical preparation, the boys had to put on as much weight as possible to counteract the weight they would lose from 55 days of rowing at sea.

“It’s not about being fit and lean, but more about being as strong and robust as possible”.

Williams has praise for the race organisers for giving them all the advice they needed.

“They give you the minimum requirements for hours at sea, and hours at night at sea, as well as a first aid at sea course, a navigation course and a radio license.

“That’s why they have a lot of successful crossings because they won’t let you leave unless you are fully prepared.

“A man called Tony Roberts from Chepstow, who we met during one of our fundraising days at Caerleon Arts Festival, was a massive help for us.

“He came to talk to us and found out straight away we didn’t know what we were doing.

“He had done some rowing and sailing before and he became our sort of team leader, and mentor. He came with us on the training rows and even came out to Antigua, so we owe a lot to Tony”.

When describing the most difficult parts of the journey, Williams said the relentlessness of the two-hour slots took its toll leading to sleep deprivation, fatigue, and hallucinations.

“I was waking up in the middle of the night and I didn’t know where I was.

“I was trying to grab something above me, hitting the roof of the cabin. Your mind can go pretty crazy before your body starts to adjust.”

“You can prepare yourself physically, but the mental challenge is so much harder. You’ve got to make sure you’re getting up on time ready for your shift otherwise the boys before you will be getting cranky and then things will start to blow up.”

“The adrenaline carries you through the start of the challenge and then once you hit halfway – or what you thought was halfway – you just start thinking of being home and a nice bed and food and that motivates you to keep going”.

The Oarstruck team had a few close shaves over the course of their crossing, plagued by stormy weather.

“You have to position yourselves with the wind and waves so you don’t capsize but when night falls you can’t see where the waves are coming from.

“So, there were a couple of times we nearly capsized. When the weather is pushing you the wrong way, you put out a para-anchor which holds you in the water to stop you capsizing.

But when a wave hits, it slackens and tightens, and it feel like it’s going to pull the end of the boat off!”

Add to that list the time they lost their steering lines for their rudder and several items from big waves coming off the top of the boat. Or, the day crew member Hugo Thompson caught a fishing hook through his fingers.

“Joel and I were rowing and Hugo decided he wanted to do some fishing. He caught this big dorado and he’s so excited and lifts it up.

“But then he starts squealing because the fish has pulled the hooks through his fingers. It was pretty gruesome”.

Oarstruck’s only connection to the outside world was a satellite phone which they used for race security to check in once a day.

They could call and text home, but it was hugely expensive.

Despite the relentless, brutal task at hand and the near-disasters, Williams maintains the positive parts of the experience outweigh the negatives by far.

The routine of the journey and the simplicity of just rowing non-stop was appreciated.

They also came across whales, dolphins and sea turtles as well as lots of Dorado and picturesque views.

Four teams had to be rescued and didn’t complete the race, but the winning foursome – The Four Oarsmen – broke the world record for the fastest Atlantic crossing ever, in 29 days, 14 hours, and 34 minutes.

Williams felt relief as the team approached Antigua, but admitted it felt weird being on land again.

“When you round Nelson’s Dockyard and go into English harbour, this place looks unbelievable.

“There are people on superyachts and people letting off flairs, and you can see all of your family on the dockside and that was pretty emotional.

“I was tripping getting off the boat and standing on something that didn’t move.

“I lost 10kg over the row and some people struggled getting back into normal sleeping patterns.

“But I started putting weight back on straight away and slept for 13 hours on my first night”.

One-quarter of the team, Thompson is a Type 1 diabetic and despite Williams saying it was no big deal, it is clearly a big achievement.

His effort proved inspirational in showing diabetic people their condition doesn’t have to affect what they do.

The team also managed to raise around £35,000 for Diabetes UK from fundraising before and after the row.