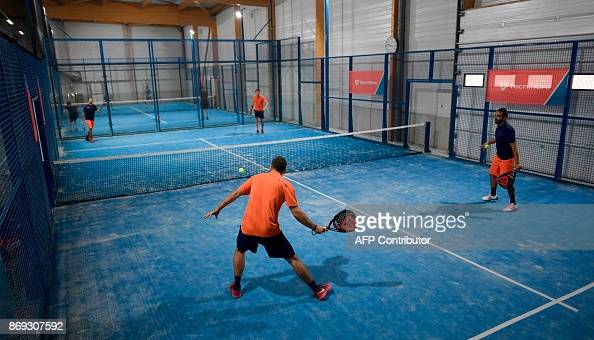 It’s the new year, so perhaps it’s time to try a new sport. Padel is the new kid on the block – fast and furious and rapidly growing, it’s already got the backing of some major names as Lucy Rees discovers.

Padel. Ever heard of it? Probably not. Well, it’s a sport that you could be hearing a lot more about in Wales as its popularity grows.

Padel – invented in Mexico in 1969 – is a racket sport combining elements of tennis, squash and badminton, played as doubles both indoors and outdoors.

It is popular across the Mediterranean, especially in Spain, and also has plenty of admirers in South America, particularly in Argentina.

But it’s relatively new to the UK and Wales in particular. So, there’s a chance to be an early adopter.

Like tennis, the middle net is present and the balls are similar, just slightly softer.

So, what else is different about it? Well, it’s played on a smaller court than tennis (10m x 20m) and the padel court is surrounded by glass walls, which the players can play shots off.

Underarm serves are the method of choice to get the game started.

The only other major difference from tennis is that the racket is slightly different – it is smaller and completely solid which makes the technique of hitting the ball a lot easier.

The scoring is the same as tennis, six games are needed to win a set and the team which wins two sets wins the game.

So, where can you play it in Wales?

Are you ready, South Wales?
Fitness, fun and social at the same time? Yes, it is possible!
Opening date will be announced in due time… in the meantime, check out our website for more information – https://t.co/MAeC0iWFE9#welshpadel #padeltennis #padel #cwmbran #southwales pic.twitter.com/LM8UwqIg8U

At present, the sport can be played at Windsor Lawn Tennis Club, Penarth but the hope is that more venues across Wales will adapt or open up for the sport.

Tennis Wales are backing its expansion – through their coaching network, Tennis Squad – as padel is fun, accessible and very sociable. As an entry into racket sports, it’s an appealing game for all ages and levels of players.

Britain’s former Wimbledon champion Andy Murray and TV tennis commentator Andrew Castle are both involved in Game4Padel – a company aiming to build courts across the UK.

“It’s like a tennis/squash hybrid played with four players in a glass-enclosed court just about one-third the size of a tennis court and with broadly similar rules – although players serve underhand, making it easier to play than tennis.

“Game4Padel was created at the end of 2018 and almost immediately we heard Windsor Penarth were interested in our fully comprehensive model. We fund, design, build and operate our venues.”

So, is it worth a try? Murray thinks so.

The two-time Olympic gold medallist has just got back from Sweden where the game has already exploded and believes the same could be about to happen here.

He explained: “It is huge over there and it is becoming very popular here, too.

“It’s a great game because it’s so easy to pick up. People who might not be able to play tennis together because of a mis-match in skill level, could easily play a decent game of padel together with long rallies.

“From that point of view it’s also really good for kids because it will help develop their racket skills and hand-eye coordination, but means they can play with people of different ages and abilities.”

Another enthusiast for the sport, as well as the facilities in Penarth, is Anthony Phillips.

He says: “We are very lucky to have these fantastic padel facilities here at Windsor Penarth. Padel is a really sociable game and it’s easy to learn, so it’s great for racket players of all abilities.

“We’ve already had a lot of interest from club members keen to try it out and, after today, we’re expecting more people to come and give it a go.

“All our venues are Pay & Play so to play at Windsor Penarth there is no need to take on a club membership. We offer a Game4Padel membership at £5 which reduces the hourly cost of the court.

“The court is accessible via an automated gate and a pin code which open the gates and triggers the floodlights.

“To get involved people should get in touch with the Tennis Squad who will organise an introduction to padel for free or people can book the court and borrow rackets directly from there.

“It is currently only being played at Windsor Penarth, but I believe a two or three court venue is opening soon at Woodland Sports and Social Centre in Cwmbran, which will be good for the sport.

Recent episodes of “A place in the sun” shows that the property market in Spain are finding Padel courts a popular and sought after addition to private gardens and outdoor communal spaces.

Our courts have covers so you can play rain or shine – in this glorious Welsh weather! pic.twitter.com/IlmO84ighF

“Padel is absolutely fantastic and I’d encourage anyone to get out there and just give it a go.”

Tennis Wales CEO, Simon Johnson is another who believes the sport has a big future, sitting alongside tennis.

“At Tennis Wales we are dedicated to ensuring that tennis is open and accessible for all, Padel included.

“The interest and popularity of Padel in Wales has grown over the past year and with the current development of Wales’s first Padel Centre in Cwmbran, we’re excited to see what the future of Padel holds for our Welsh tennis players.

“We’d encourage everyone, no matter age or ability, to pick up a bat and give Padel tennis a go!”