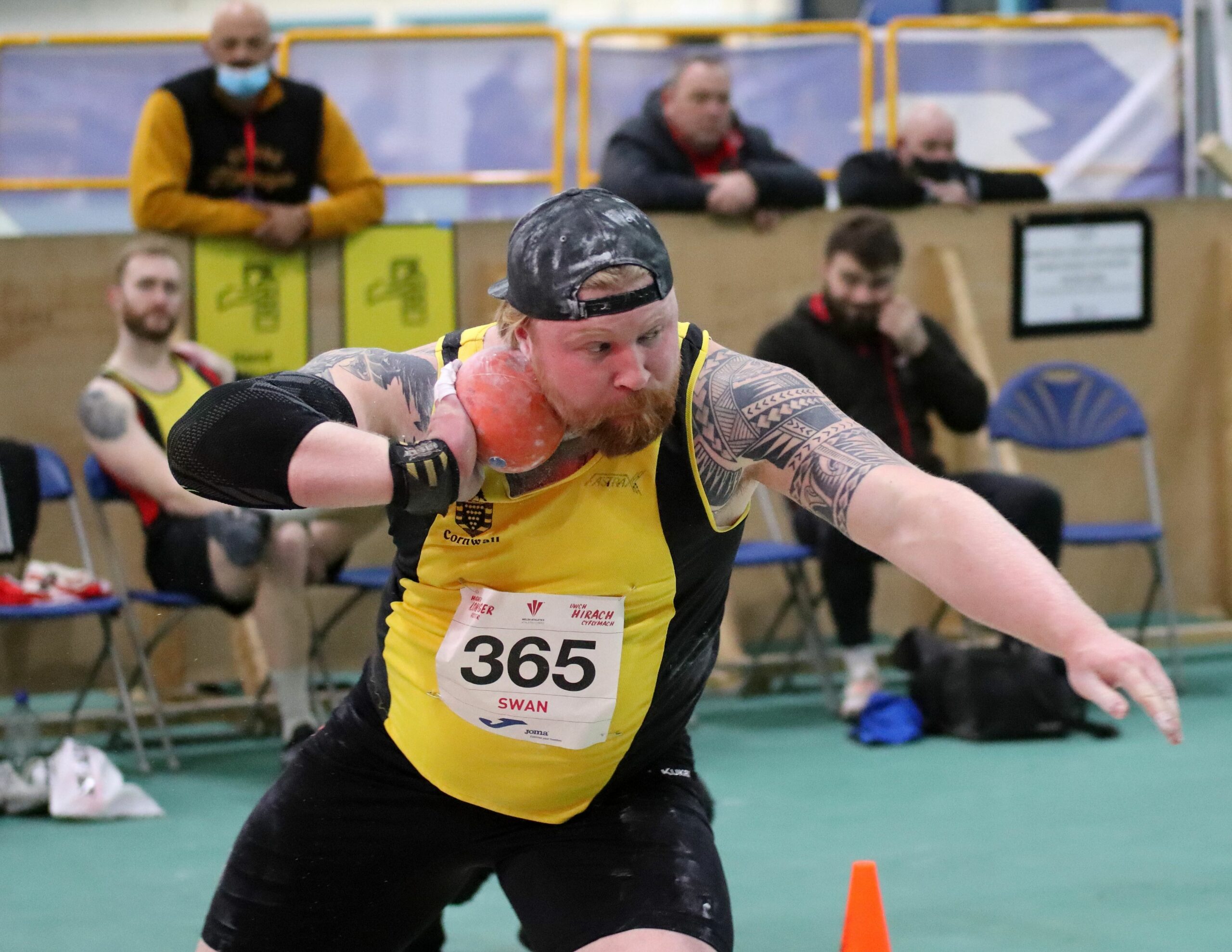 Patrick Swan may be from Cornwall, but he is more than happy to regularly make the trip across the Severn Bridge to compete in – and for – Wales.

Despite being based across the water in England’s most south-westerly county, Swan is a familiar face on the Welsh athletics circuit, competing for Swansea Harriers and pulling on the red vest of Wales.

Last weekend, the big shot putter added 15cms to his personal best at the National Athletics League’s opening Premiership fixture of the summer in Cardiff.

Unfortunately, his effort of 17.60m wasn’t enough to earn him a nomination standard for the Welsh team at this summer’s Commonwealth Games in Birmingham, but Swan has plenty more to focus on.

The current Welsh indoor champion has got his eye on the 19m mark, which has only been achieved by one British athlete – Scott Lincoln – since 2012.

In Cardiff, a win and PB for Patrick Swan, 18.60m, 40cm short of the Wales qualifying standard and beating Youcef Zatat. pic.twitter.com/eHG7jAHG5j

“My coach, Ryan Spencer-Jones, definitely thinks I can get there,” says Swan referring to the twice Wales Commonwealth Games representative who is now guiding his career.

The 24-year-old says Spencer-Jones has been responsible for huge improvements in his performance.

“My strength, my speed, the whole programme really. I’m lucky to have a guy like Ryan pushing me on,” says Swan.

The dearth of competition in his native Cornwall means the Swansea Harrier is happy to regularly hit the road and compete in south Wales.

Three days before the National Athletics League opener, Swan was once again in Cardiff taking part in the Run With the Wind event specific meeting, which he won with a throw of 17.22m.

“Coming from Cornwall, there’s nothing down there,” says Swan.

“Being half-Welsh, my mum’s side gives me so much more of an opportunity.

“Luckily, I’m happy to have that opportunity all the time to come and throw.”

Swansea Harriers were certainly pleased to have him in Cardiff last weekend as he earned them full points in the shot competition, beating long-time UK No.2 Youcef Zatat in the process.

Swan’s success along with other performances like Hannah Brier’s double victory in the 100m and 200m, meant Swansea finished a respectable fifth place out of eight teams in the league curtain raiser.

Finishing one place higher on the day were hosts Cardiff Athletics, who enjoyed a number of fine individual performances.

Ieuan Thomas won the steeplechase in 8:51.28, while Rebecca Chapman leapt to victory in the long jump with 6.04m.

Jeremiah Azu was in good form winning the 100m in 10.46 and he was also part of the Cardiff men’s 4x100m team alongside Sam Gordon, Dewi Hammond and Arron Owen, which enjoyed a big win clocking a rapid 40.17.

The time was just 0.37 seconds outside the league’s hand-held record and within half-a-second of the club record.

For full results and scores go to the National Athletics League website.