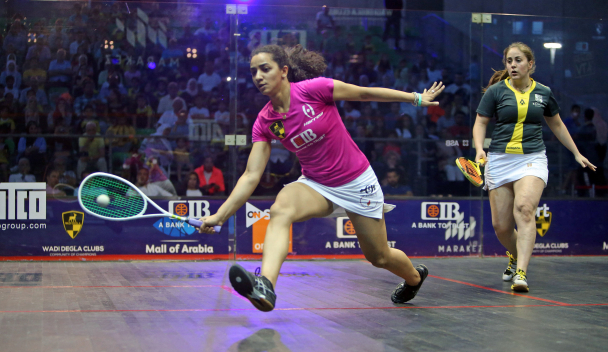 Tesni Evans, the pride of Welsh squash, is aiming to fire up her PSA World Tour Final chances at the Mall of Arabia in Cairo this evening.

British and Wales champion Evans, based in North Wales, takes on New Zealand’s Joelle King in her second group clash.

Victory for 26-year-old Evans is essential after her defeat against Raneem El Welily yesterday – and there is no question success is highly possible.

The World number nine stormed back from two games down to beat King at Philadelphia’s Drexel University and book her place in the quarter-finals of the US Open Squash.

“I was getting completely outplayed for the first two games, Joelle had me everywhere and was all over me, so something had to change,” said Evans.

“I tried to change my game and luckily it paid off in the end.”

King has a solid record against Evans, but those wins for the Cardiff-born player will ensure she has belief.

The final group match for the Wales ace will be against fourth-ranked Camille Serme (France) on Wednesday.

Evans is in group A and played Egyptian World number one El Welily in her first group match.

Fresh from winning a quartet of awards at the PSA dinner – including PSA Women’s Player of the Year – El Welily was in dominant form and won 11-4, 11-6.

Evans returns to Wales after the finals and will be among 120 guests at the Squash Wales awards night at the Angel Hotel on Friday, June 28.

Wales number one Joel Makin, the World number 13 from Haverfordwest, will also be among the players attending.