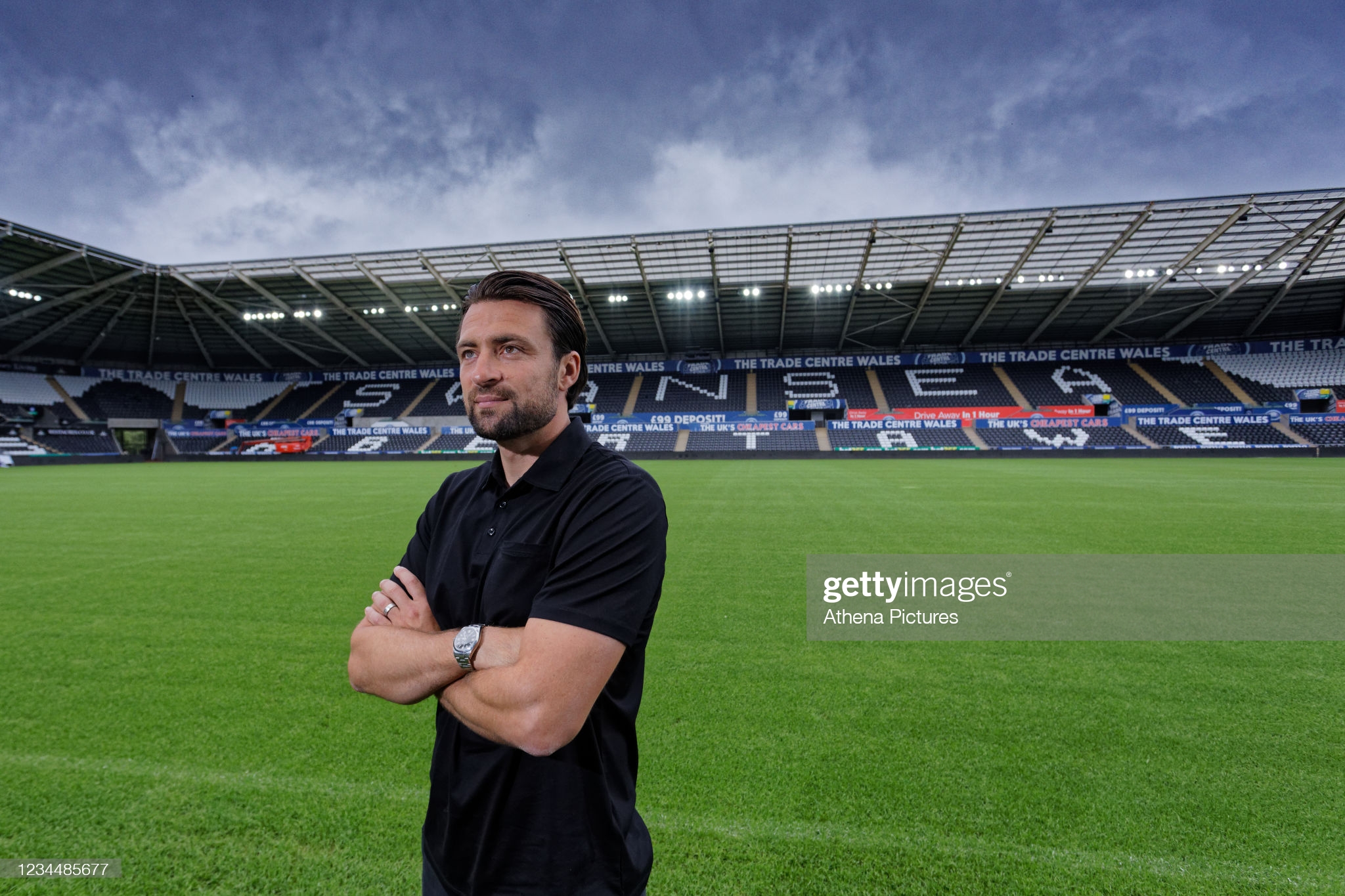 New Swansea City head coach Russell Martin has admitted he can give no guarantees star men Matt Grimes and Connor Roberts will stay at the Liberty Stadium.

The frank assessment is likely to encourage the club’s Championship rivals they might be able to prise either away from the Swans on the eve of the new season.

But Martin also insists the club can be competitive in the promotion battle and has dismissed suggestions momentum will wane after two play-off failures and the ending of parachute payments.

In an assured and confident performance at his first media briefing, the 35-year-old former MK Dons boss insisted there will be new permanent signings as well as loans, along with an insistence on a possession-based passing game.

Swansea captain Grimes and Wales full-back Roberts are both out of contract at the end of the new campaign which begins for the Swansea on Saturday with a trip to Blackburn Rovers.

Grimes is a £3million target for Fulham while Roberts – currently out with a groin injury suffered on international duty at Euro 2020 – is of interest to Premier League Burnley and a host of Championship clubs.

“Matty is a fantastic player. I hope he can stay,” said Martin at his official Swansea unveiling.

“If it comes to a point where he has left, it’s because the deal is right for the club and it means we can use that to help us out in other areas. I’ve got a guy who is fully committed while he’s here.

“I’ve not chatted to Connor so much because he’s injured, but I’m aware he’s a fantastic player. I’ve seen a lot of him.

“It’s a difficult position because for us he’s a player we like and who would suit what we’re doing but at the same time, when someone enters the last year of their contract, no one’s naive.

“If a club comes in with the right offer that we can then use to strengthen our squad, we have to plan not just for this season but for the season beyond.”

The Swans have lost key men from last season such as Freddie Woodman, Marc Guehi and Andre Ayew since May’s Championship play-off final defeat at Brentford.

That loss also precipitated the departure of former head coach Steve Cooper who felt he would not be given the backing he needed to launch another tilt at promotion.

“The squad is a little bit thin at the moment,” Martin admitted.

“We’ve had lots of chats about that and I’m pretty confident that I’m being really well supported.

New Swansea City head coach Russell Martin insists there will be permanent signings as well as loans in this window. Assured performance by him on first media day. More on @SkySportsNews pic.twitter.com/aCcfc2yf6F

“We have had lots of communication over the first four days. I haven’t had much sleep – hopefully I will get some at some stage.

“I am looking forward to seeing some other players in the building as quickly as possible. I am confident that will happen – but you also have to respect the players that are here. It’s a good squad and everyone’s got a clean slate. ”

“We’ve had a couple of chapters where we’ve had a real good go, and we got to the play-offs, and it’s all very good for the football club to be that competitive.”

Chief executive Julian Winter refused to state a clear ambition for this season and said there is no talk of a promotion challenge as that would load too much expectation on the new head coach.

Winter insists the club’s American owners took a full part in discussions over Martin’s appointment  and claimed they remain interested in trying to build success.

He said: “For us, it’s about being competitive, and that takes us where it takes us. We just want to be as competitive as we can be.

“This is a new chapter. Russell’s got a clear idea of the way he wants to play which I think is going to excite fans.

“I think one of the big things with Russell is that he has a clear playing philosophy. I think that suits this football club in abundance.

“We add all this together, hopefully create some success, then we can all enjoy it.”

Winter also spoke of his excitement at the return of fans to stadiums for the start of the 2021-22 season, with travelling Jacks preparing themselves for the trip to Ewood Park, before a 16,000 crowd capacity comes into effect for the first home game of the season against Sheffield United.

“We’ve got fans coming back in, and not just a lower number now, we’ve got a significant number,” he added.

“I think there’s just a level of excitement now, across the city. It’s unbelievably exciting.

“To come here as a player as I did, and then as an administrator for another club, and you feel that electricity in the stadium.

“This stadium has got something about it, and that comes from the people that are in it. I can’t wait to experience that, as I’m sure Russell and the players can’t.”