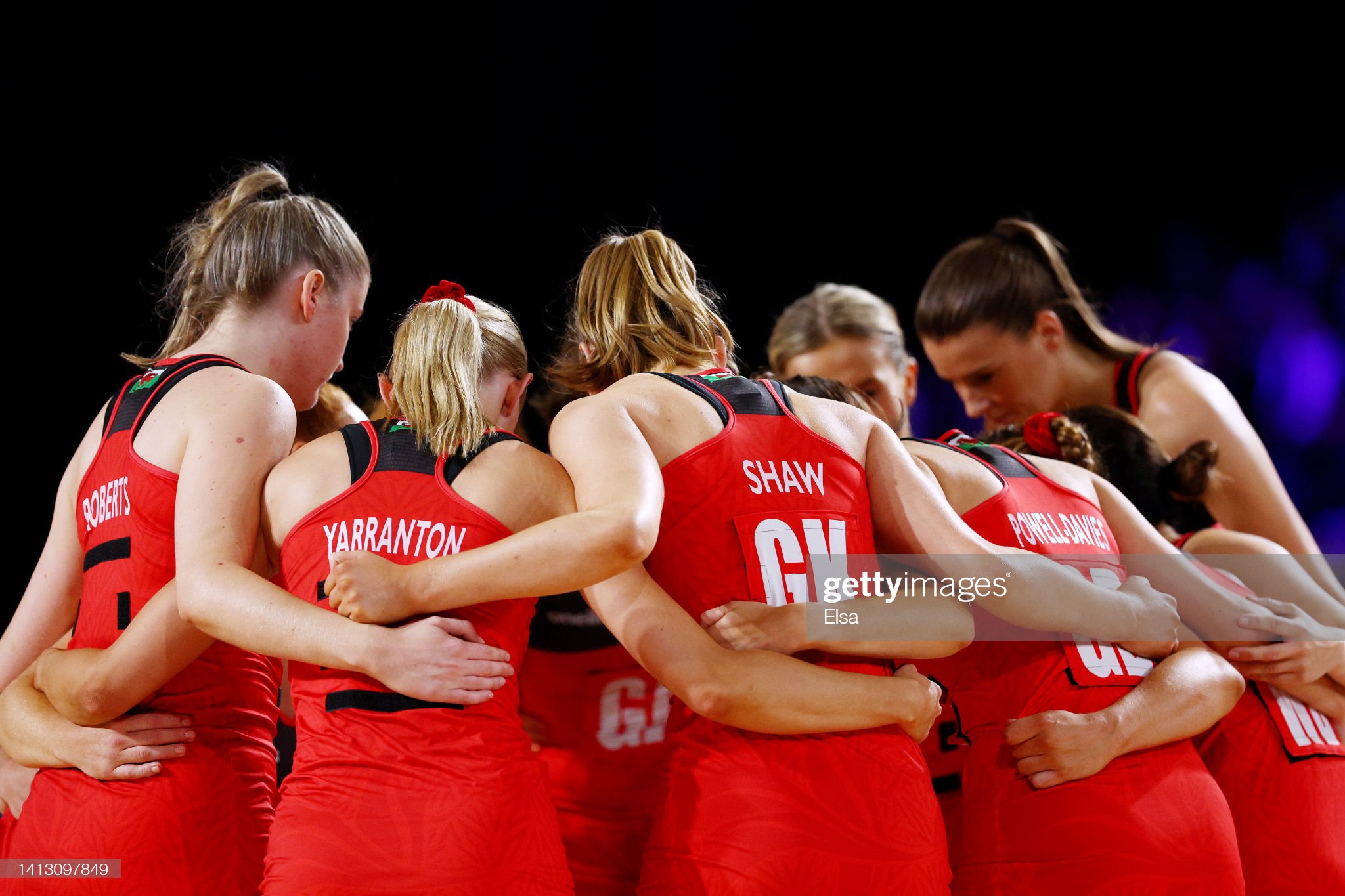 Team Wales huddle prior to Netball - Classification 7-8 match between Wales and Malawi on day eight of the Birmingham 2022 Commonwealth Games . Pic: Getty Images.

Wales coach Sara Moore has challenged her team to lay down a marker for the Netball World Cup qualifiers when they face Uganda this weekend.

The Welsh Feathers – as they have recently been rebranded – take on the East African nation in two matches at the House of Sport in Cardiff, with one eye firmly fixed towards Glasgow.

That’s where Moore’s side face a six-nation round-robin tournament next month that will determine whether or not they make the World Cup in Cape Town next year.

Wales failed to make the 2019 World Cup in Liverpool and the repercussions were described as “catastrophic” by experienced international Nia Jones.

That’s why maintaining the optimism of an encouraging Commonwealth Games performance earlier this year is vital in the two games against the Ugandans, the second of which on Sunday will be streamed live on S4C Clic.

“It’s great to have international matches before we go into those qualifiers to enable us to go there with some momentum,” says Moore, who took over after the last unsuccessful World Cup bid.

📢 Welsh Feathers Squad to face Ugandan She Cranes is Selected

Head Coach Sara Moore has selected her squad of 13 for the upcoming test series against Uganda.

To see who will be competing in this 2-match Test Series, click this link ⬇️https://t.co/3cc3IAvf4n pic.twitter.com/ImcnYCixd8

“When I took the job on, I was taking over a team that hadn’t qualified for the last World Cup. That happens, because some teams will always miss out.

“But I said to myself, we have to make sure that this team qualifies for all major championships. I’ve been quite open about that. Commonwealth Games and World Cups are where Wales need to be.

“We don’t shy away from that and it’s something we talk about as a group. We need to go to these competitions and perform well.”

Uganda will present a firm test for the Feathers. The touring side finished fifth at the Commonwealth Games in Birmingham after beating South Africa.

Wales were a creditable eighth, but they did prove in victories over Scotland and Barbados – and a decent showing in defeat to runners-up Jamaica – that they have enough wherewithal to be among the two teams in Glasgow who claim tickets for the finals.

Moore has lost some players, such as Kyra Jones, who stepped away after Birmingham, but the core of the team remains in place with old heads like Jones, Suzy Drane and Bethan Dyke still in place.

They have been supplemented by some fresh faces, including 17-year-old goal attack Sarie Watkins from Team Bath.

“Sarie Watkins is someone I’ve been looking at for a long time,” says Moore.” I first saw her when she was just 14 years of age. That’s how talented she is.

“She has represented Wales U17 and U21 and she’s someone we are really excited to see.”

Another shooter, Holly Jones from Durham, is also part of the new intake, as is Leeds Rhinos’ wing defence Megan Pilkington.

The inexperienced Phillipa Yarranton – who earned a late call up for the Commonwealth Games after coming through the ranks at Celtic Dragons – also gets a further opportunity after only seeing six minutes of court time in Birmingham.

Moore adds: “We are an amateur sport and the athletes don’t get paid to play for Wales. The players have jobs and other calls on their time.

“So, we have lost a few players from the Commonwealth Games squad, which is disappointing, but it’s where the sport is at in Wales.

“We have had to look at youth players and we’ve included some new aces. It’s a great opportunity to see them before I select the squad to go to the World Cup qualifiers.”

After a Whirlwind Few Years For Betsy Creak . . . The Team Bath And Wales Star Is Ready To Face Proteas Challenge

At least the newcomers have the familiar faces to steady any nerves this weekend and the head coach insists it was not a case of having to twist any arms to get the likes of 35-year-old, 116-cap Welsh legend  Drane to stay on.

“It’s not about persuasion,” says Moore.

“It’s about creating an environment in which people are thriving.

“You can’t bring youth through without having experience around them. Athletes who have seen major competition time and again before – the likes Nia Jones, Suzy Drane, Bethan Dyke, Georgia Rowe – can lead the way for the youngsters and show them how it’s meant to be done.

“I am absolutely thrilled that the likes of Suzy Drane and Nia Jones are still continuing to love playing netball for Wales and are still doing a fantastic job leading Wales.”