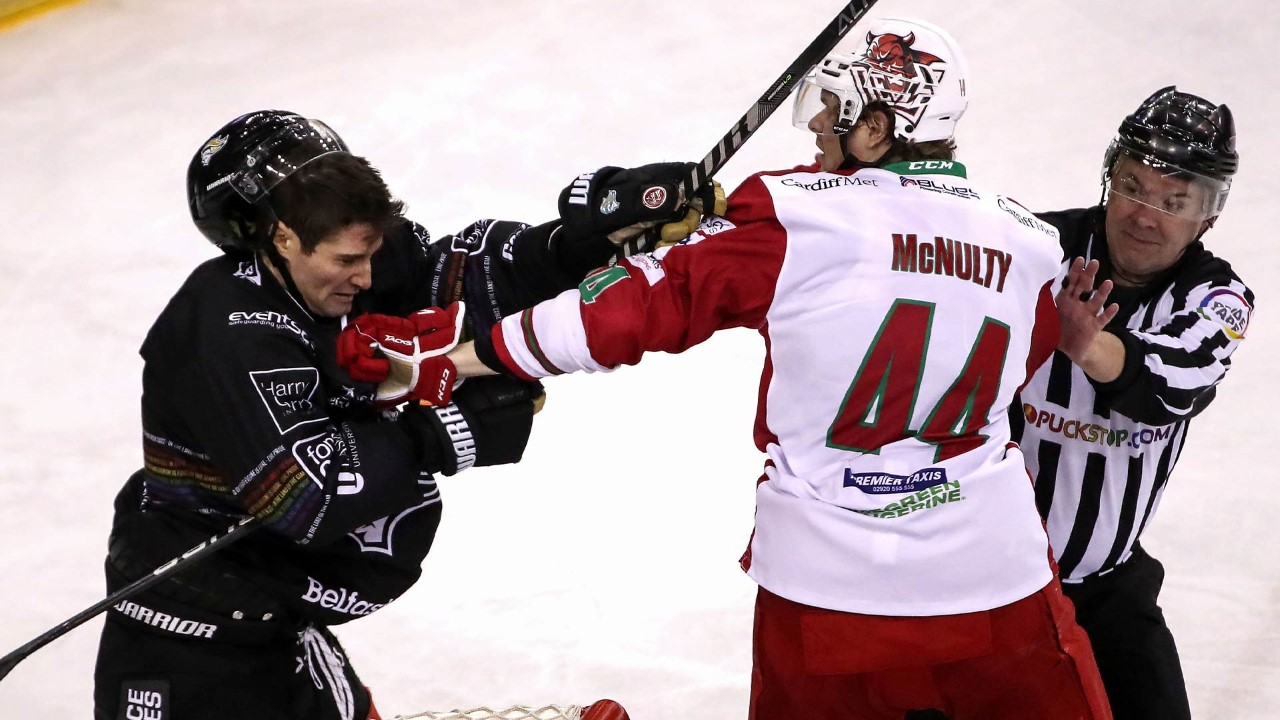 The Devils were on a powerplay and had pulled their goaltender when Matt Register wound up and sent a rocket of a shot past Tyler Beskorowany in the Giants net with only 1:22 remaining. But the officials controversially opted to review the goal, eventually ruling it out due to goaltender interference.

The decision left many, including the live TV commentary team, bemused as the suggested contact on the goaltender’s stick from Jake Coughler appeared far from obvious on the TV cameras – although the officials did have access to an additional top-down camera angle.

“I don’t see why there was a review on that. The official takes it upon himself to decide that he has to review the goal,” rued Skalde post-game.

“It was a great hockey game, back and forth between two really good hockey teams with so much good stuff going on between both sides. I’m so disappointed for our players, I’m disappointed for their players and for the people that are here tonight.

“We have an excellent hockey game going on. The players decide the outcome of a hockey game. That’s why we play the sport.”

Beskorowany stopped all 34 shots to earn his fourth shutout of the season and brought the Devils’ seven-game winning streak to an end.

“Their goaltender was sensational tonight, we had some really good looks at him but he came up with some big saves and was deservedly man of the match for Belfast,” said Skalde.

Devils goalie Mac Carruth had started in both of his side’s victories over Belfast earlier this season. He returned in net for the first time in three games and made 37 saves against the Giants, who have now won 11-straight league games.

Tyler Soy scored the only goal of the game, shooting over Carruth’s shoulder to convert off a clever pass from Jordan Boucher with 1:05 left in the second period.

"Up top shelf where you keep the good whiskey!" 🗣️

Tyler Soy finds the roof of the net to give @BelfastGiants the lead! 🏒🚨 pic.twitter.com/qDNVSkrUre

“I thought we played an excellent hockey game, it was two great teams playing hard and playing for every inch on the ice. We’re going to take from that, we’re disappointed but we’ve got to get back to Cardiff and get ready for our game on Sunday,” said Skalde.

The result moves the Giants within three points of the Devils, who fall to second place in the Elite League table after Sheffield Steelers also saw off Coventry Blaze 2-1 on Friday night.

The Devils have played five games more than both their title rivals and host Fife Flyers on Sunday behind-closed-doors at Ice Arena Wales.

Fans will be able to return to games from Friday January 28th following the latest Welsh Government Covid update, which coincides with back with back-to-back games against the Fife Flyers (Friday 28th) and the Nottingham Panthers (Saturday 29th).

UPDATE – The Devils have also completed the signing of forward Riley Brandt after it was confirmed centre Josh Lammon faces surgery on a shoulder injury sustained during their win over Manchester Storm last weekend.

Brandt, 5’7″, 170 lbs, arrives from Edmonton, Alberta where he led MacEwan University Griffins with seven goals and three assists in 10 games this season.

Prior to this season, the 25-year-old had missed three full seasons, two due to injury and the 2020/21 season due to Covid. Last month, he was named to the USports All-Star team that faced the Canadian World Junior squad.

Lammon is expected to miss between 6-8 weeks and will undergo surgery later this month.